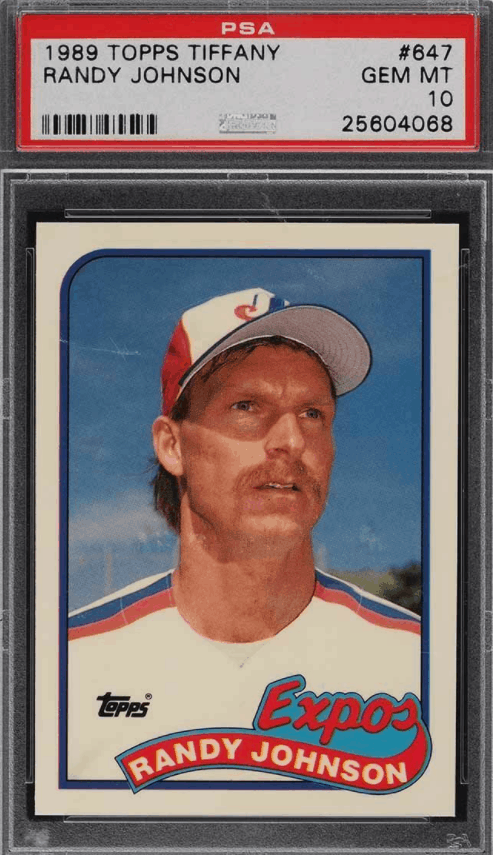 Are 1989 baseball cards worth money? Well, of course. Even with the junk wax era in full swing, many of the cards from this year are on a major upward climb. Partially in part because they’re riding on the coattails of the LEGEND of Junk Wax: The 1989 Ken Griffey Jr. rookie card. While that certainly explains some of it, the overall market has been on a steady climb. And with it so are some of the most sought-after cards from this year.

It’s a year in baseball where we saw the A’s win the World Series after being interrupted by the devastating Loma Prieta earthquake. But San Fransico pressed forward to rebuild itself after enduring over 6 billion dollars worth of damage. A true testament to the American spirit.

In other sports, the rough and rowdy Pistons bounced a young Michael Jordan and the Bulls from the Eastern Conference Finals and went on to win it all. Meanwhile, the Flames ruled over the NHL and beat the Canadians in the Stanley Cup Finals. And who could ever forget the legendary last-minute drive that ended with a game-winning touchdown pass from Montana to Taylor?

It was truly a remarkable time in sports. And perhaps that’s why we’ve seen a renewed zeal for baseball cards that came out that year. Now let’s see which ones are worth the most money!

Related Content: Most valuable baseball cards of the 80s and 90s

1989 Baseball Cards Worth Money: 5 Options to Bank On

Side note: When it comes to the most valuable cards from 1989, they’re pretty much ALL Griffey. Therefore, we’re only going to list Griffey’s most renowned card so other players can share the spotlight. We’d hate to get on the bad side of Randy Johnson. 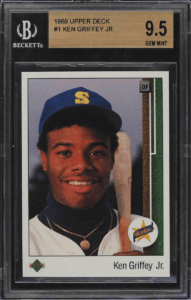 No surprises here. As we said earlier, this card seems to have taken the rest on its back for a steady march upward. Especially in recent years where we’ve seen values go completely parabolic. It’s a truly iconic card that set the groundwork for modern collecting. Even if it was a tad overproduced. At any rate, the card has sold recently for almost $8,000 in pristine condition. Expect that to go higher. 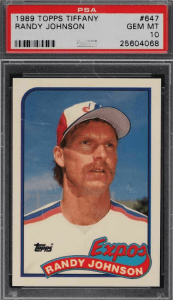 The Big Unit has a Topps Tiffany rookie card with a BIG price tag. Randy is shown gazing off into the distance with an almost perplexed look on his face. Penny for your thoughts Randy. On second thought, we don’t wanna know. Either way, the card has no problem generating $1,500 with a PSA or Beckett Grading Service 10 grade. Which makes sense because this guy was an absolutely DOMINANT force who only sits behind strikeout king Nolan Ryan for most ever in a career (and his K per 9 rate is actually higher than Ryans). Point is, you’re investing in one of the best pitchers to ever throw a baseball. Always a good thing. 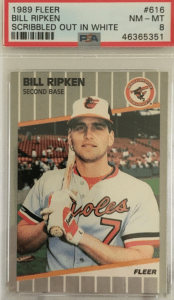 Here’s another example of a 1989 baseball card worth money. One of the most famous, or should we say INFAMOUS, error cards of all time. If you began collecting as a kid in this era you’ll remember hearing all the rumors and speculations amongst your buddies about what it actually said on the bat before the whiteout, scribble, or black box was applied. We’re not gonna go there but it’s fairly easy to find out if you look it up! As far as value goes, the one with the whiteout is worth the most, reaching up to $1,000 in the right shape. 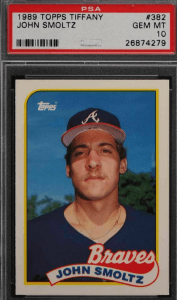 While not nearly as intimidating on the mound as Randy Johnson was, Smoltz is another one of the game’s all-time great pitchers. Not only was he a great starter, but the man also became the league’s premier closer for a few seasons towards the latter part of his career. In fact, Smoltz set the all-time record for saves in a single season in 2002 with 55. That record didn’t stand long but Smoltz’ mark on the game certainly will. Want a piece of the action? Have at least $500 ready to spend if you want a 10. 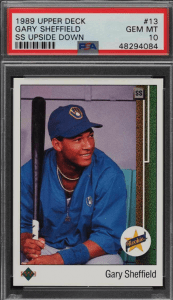 Who knew you could even make an “upside-down” letter s? The character looks perfectly symmetrical to us. At any rate, this misprint features the SS (for shortstop) on the front with the wrong side up. If you like error cards (we certainly do) consider buying one that features one of the game’s most underrated players. To this day he is still being shunned from the hall of fame, which to us seems like a travesty. Hall of Fame or not, this card’s value reflects how good of a player Gary was with prices reaching $400 in gem mint condition.

Are 1989 Score baseball cards worth money?

The quick answer: Not a lot. Nothing made by Score can really come close to the ones we’ve listed other than the Ken Griffey Jr. “Young Superstars” card that can sell for over $300. There’s also a Score Traded Griffey rookie card worth a couple of hundred bucks but besides that, there’s nothing too remarkable about the set. Not as far as value goes anyways.

If you happen to be buying one of these in the baseball offseason you’ll probably do well by selling in the heat of summer when the sport has renewed interest. Other than that, we prefer a longer-term play. 7/10

Because the guys on these cards are legendary players (or in Billy’s case the brother of a legend) we prefer either a medium or long approach. These cards should hold their value and increase along with the overall market over time. 8/10

For Johnson, Smoltz, and Griffey this is our favorite approach. They’re all Hall of Famers that have made a lasting impact on the game. And when this is the case, you should feel comfortable stashing a few away in hopes of cashing in big. 9/10

More of a hockey guy? Here are some of the most valuable hockey cards from the 80s.