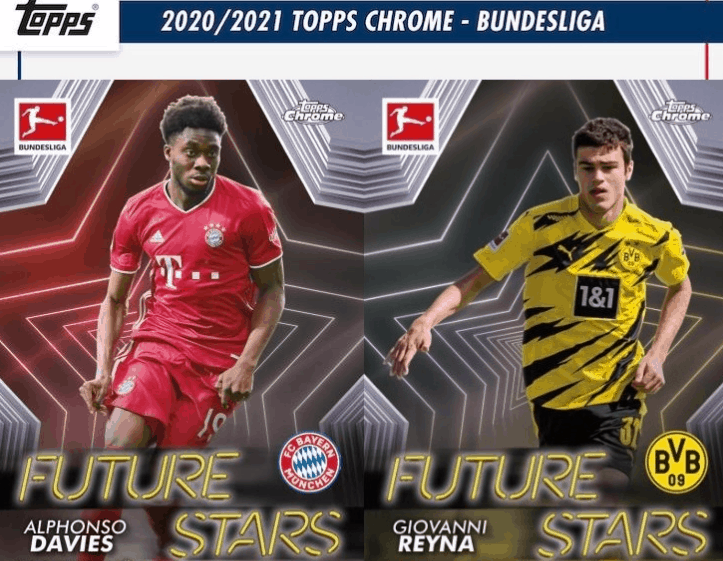 2020-21 Topps Chrome Bundesliga is one of the game’s most anticipated sets and is poised to make an impact in the coming months. Which comes as no surprise with Soccer quickly emerging as a popular card collecting market. Add to that the fact the world’s most popular sport is continuing to expand into both Asia and North America, and it’s hard to see that trend stopping anytime soon.

Therefore, getting into the market early could end up paying big dividends in the future. That said, the German Bundesliga league is one world’s best, making the Topps Chrome Bundesliga a perfect opportunity to start your soccer card collection. Now let’s find out what it has to offer!

Random thought: Many collectors are attracted to the Lionel Messi rookie card market. But is the German Bundesliga league’s Robert Lewandowski a better overall player?

Base Cards and Parallels 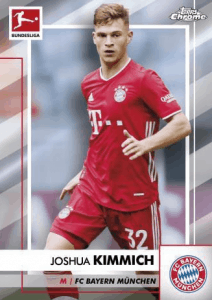 The base design is nice and simple, featuring the player in the foreground with a faded, striped background. Additionally, the base cards from this set include typical details such as team, name, position, and league scattered around the border.

There are 100 base cards featuring some of the league’s best players such as the world-renown Robert Lewandowski. Additionally, you’ll be able to find the likes of Alphonso Davies, Marco Reus, Manuel Neuer, Jadon Sancho, and Thomas Muller. A true show of force no matter which way you slice it!

By the way, there is also a Rainbow parallel that includes multi-colored stripes along the sides. Populations of the Rainbow Parraell vary from player to player and can be as low as 250. 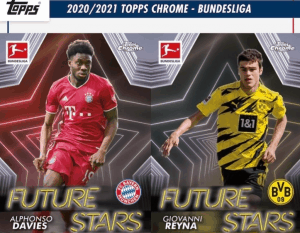 Defining who’s a rookie in soccer is almost impossible as the players usually progress through the academies before slowly showing up on their first teams. For this reason, Topps has included a Future Stars insert instead of a rookie card. The insert focuses on some of the best young talents in the league. Meaning you should pay close attention to these as many may go on to become some of the world’s finest talent.

At any rate, the inserts feature the words Future Star in big bold letters and show players on the front with gigantic stars in the background. As far as rarity goes, you’ll see a Future Stars insert show up once in every 6 packs. Get ready to dig!

In addition to the Future Star inserts, there’s also a Decade of Dominance insert that will feature some of the league’s best players from the past, you guessed it, DECADE!  These are likely to be sought after items due to rarity (1 in every 9 packs) and the sheer star power of the players shown on the cards. 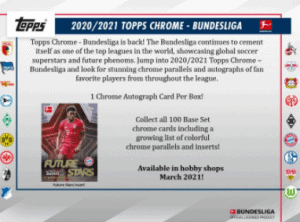 Like with almost every popular set these days there are plenty of autographed cards for you to keep your eyes peeled for as you bust through those fresh packs.

The Base Chrome Autograph card is by far the most common with it making an appearance once in every 18 packs. As far as style goes, the overall design is similar to that of the base card with exception of the player’s autograph.

Additionally, the Base Chrome Autograph features 3 rare parallels of its own: the Gold Refractor (#/25), Orange Refractor (#/10), and SuperFractor (1/1). These are incredibly rare so expect them to have amazing built-in value.

Some of the previous parallels mentioned also have autographed versions with the best players from the last 10 years signing the Decade of Dominance cards, the most promising players in the league signing the Future Stars cards, and the top scorers from last season signing the Top XI inserts. Each card is numbered up to 99 and can be found in the regular packs.

The Bundesliga league features some of the biggest up and coming talent in the world. Therefore, if the soccer trading card game continues its upward trajectory, the cards in this set could become a force to be reckoned with! Keep a close on the Future Stars, Decade of Dominance, and Top XI inserts.

Other players to look for aside from the ones we’ve mentioned previously include Erling Haaland, Alphonso Davies, Giovanni Reyna, Dayot Upamecano, Moussa Diaby, and Achraf Hakimi. Just to name a few.

As of right now, the release date is set for the spring of 2021 on March 10th. However, like with anything else in this world the date is likely subject to change. For instance, the LONG awaited 2020 Panini Prizm Football release date was recently pushed back from November 18th, 2020 to December 2nd, 2020. Sure, it’s only a couple of weeks, but that seems like a lifetime for the many collectors who have been anxiously awaiting the day they finally get their hands on a Panini Prizm hobby box. Hopefully, this Topps Chrome Bundesliga doesn’t experience a similar setback!

With the league wrapping up not too long after the release of the set, this could be a decent speculative play. While there won’t be that many selling opportunities before the season ends, you could certainly make out nicely if you time the market right. Look for some of the league’s best players and hope they finish strong! 8/10

This seems to make more sense than a short term play simply because it’ll give you much more time to get a feel for what cards will emerge as the most coveted collector items. Watch closely, wait patiently, and take your best shot leading up to the 2021-20 season. There’s plenty of cards from this set that will surely be hot items once the new season rolls around. 9/10

This strategy depends on whether or not you believe the soccer card industry will continue to grab a share of the market. If you think it still has plenty of room to grow, invest with confidence as there’s plenty of players in this set who will be leaving a lasting mark on the game. Especially the ones found on the inserts! We personally think you’ll fair quite well if this is the strategy you decide on. 9/10

Having a hard time waiting for the 2020-21 Topps Chrome Bundesliga release date? Check out these 2019-20 soccer hobby boxes!