The Series 1 set of cards is always eagerly anticipated amongst NHL enthusiasts, and the 2020-21 Upper Deck Series 1 set was no different. And now that it’s finally on the shelves (as of November 18th) the set has gone from being eagerly anticipated to rabidly demanded. That said, we feel obliged to shine the spotlight on any set of cards that draws this much attention. Let’s check out what’s inside! 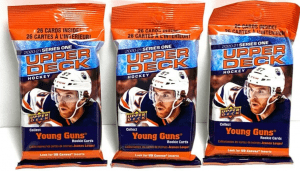 The base set features the most common cards, with 250 in total. This amount breaks down into 198 regular cards, 49 “Young Guns” cards, and 3 “Checklist” cards. The Young Guns card is effectively the rookie list of players, therefore it’s going to be extremely popular. Additionally, they’ll be a bit less common than the regular base cards only showing up once in every 4 packs.

The design is fairly understated with the player in full uniform taking up the majority of the card and an angled footer that contains all the usual information and branding. 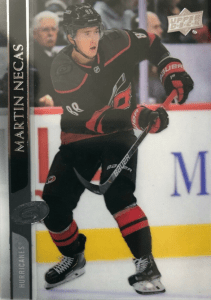 When we say the parallels list is extensive, we are not exaggerating. For example, the list includes all of the following different styles: Clear Cut, Exclusives, High Gloss, French, 2020 NHL Draft SP, and even some Regular Clothing cards. And this is before we even talk about inserts!

The Clear Cut cards are unnumbered and average 1 in every 96 packs for the regular base while the Young Guns Clear Cut feature just once in every 288 packs.

The French parallels feature an identical design, but with French text instead of the usual English and are slightly more common than Clear Cut (1 in 30 packs for regular cards and one in 120 packs for Young Guns).

As far as the 2020 NHL Draft SP parallels are concerned, go ahead and count your lucky stars if you find one as they only appear in 1 out of every 12,960 packs. 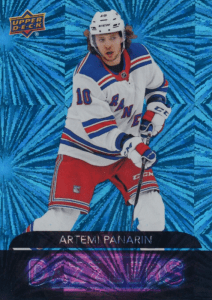 In addition to these, there are two sets of inserts that feature rookies: Debut Dates (1 in 20 packs) and Rookie Retrospectives.

Another insert you’ll find in the set is UD Portraits. This one shows up at the following clip: Gold (#/99 regular set, #/25 Young Guns) and Platinum Blue (#/25 regular set, #/5 Yong Guns). Please note these are only partly released in the Series 1 set so keep your eyes peeled for another batch once Series 2 comes out.

For the super lucky there is also the extremely rare Ceremonial Puck Drop and Day with the Cup cards. Each of these only appears just once in every 2,280 packs. 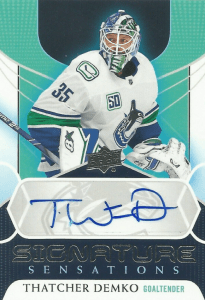 As if you didn’t already have enough to wrap your head around,  there is another group of cards featuring autographs and jersey patches.

The most common among the signed cards is the Signature Sensations that average 1 in every 276 packs. These are considered the base autograph card of this set. 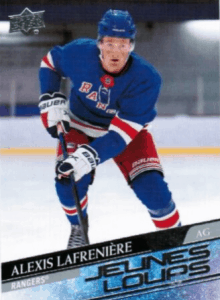 LW Alexis Lafreniere was the first overall pick of the draft with many tipping him as a future MVP. The card shown above is the French parallel of the Young Guns editions and is already going for more than $500. In addition to this parallel, you can expect to see many of the other parallels begin to surface over the following months.

The Blaster Box comes with 6 packs per box plus an additional bonus pack (they could have just cut to the chase and said it comes with 7 packs!). Within each pack, you’ll find 8 cards according to the rations we’ve already laid out above. A solid opti9on if you’re not looking to go crazy and spend hundreds of dollars.

We’ll cut to the chase for them and just say it comes with 11 packs rather than 10 plus a bonus pack. Just like the Blaster Box you’ll find 8 cards per pack with the exception of the bonus pack which only has 3. Price-wise it’s a tad more expensive than the Blaster, but on ratio you’d expect for the number of cards you’ll be getting.

So this is the one you’re looking for if you’re a true hobbyist (hence the name). With each Hobby Box, you receive a whopping 24 packs with 8 cards in each. If you want as many “lines in the water” as possible for an affordable price, this is the route you should go. Good luck!