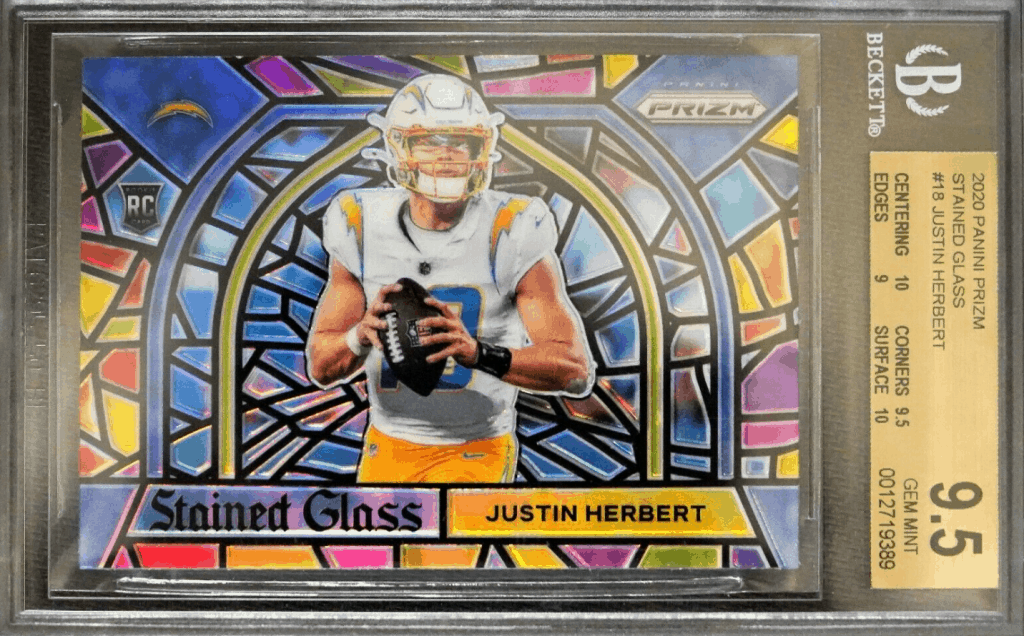 If you’re anything like you’re either waiting on your 2020 Panini Prizm Football box or opening as we speak. At any rate, we both have plenty of packs to open and cards to consider so we’ll keep it brief!  As you know, Prizm offers some of the most popular and valuable football cards you can get your hands on. That’s probably why the set causes such a humongous buzz amongst collectors every year without fail. This year will be no different. And now that the highly anticipated release has come and gone, it’s time to take a look and what we’re working with. We’ve also included a couple of updates on some of the top cards to land on eBay so far. Enjoy!

As always there is a formidable base set of cards that include 300 current players and former legends along with 100 rookie players. The rookie cards average 2 in each pack, meaning 1 in 6 cards are rookie. And with this year’s batch of rookies (Burrow, CeeDee, Herbert, Tua, Clyde) those will be some highly sought-after cards!

As far as parallels go, there are two that are unnumbered. The first is the silver which shows up once per box (1 in 144). The other is a rad snakeskin style card that averages just one per case (1 in 1,728).

On top of these, there is also a whole host of special boxes available. These include their own exclusive parallels, which are sometimes numbered and sometimes not. 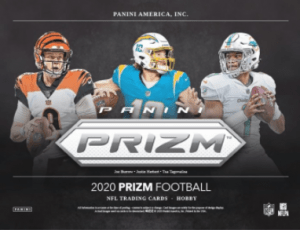 If you find one of these showing a player that goes on to become one of the NFL’s top stars, you’re going to be seeing nothing but dollar signs. They are extremely rare with just 4 parallels, all numbered under 100: Prizm (#/99), Purple Power (#/49), Gold (#/10), and Black Finite (1/1). Just imagine pulling that Black Finite in a box break! 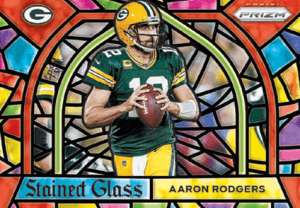 Panini Prizm inserts are always popular due to their unique designs and this year’s set includes some old favorites.

The inserts average 4 per box.  The most common inserts you’re likely to come across include All Out, Go Hard or Go Home, and the appropriately named Lockdown. Slightly rarer finds are the short print Aurora, Illumination, and Instant Impact. Meanwhile, there are also a couple of super rare cards such as the fan-favorite Stained Glass (1 in 8,640) and the ever so beautiful Color Blast (1 in 17,280). 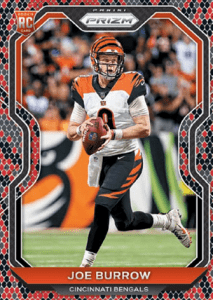 The obvious rookie to look out for is the 1st overall pick of the draft Joe Burrows. The young Bengals quarterback is already a fan favorite and has so far has exceeded many rookie year expectations. The Bengals will be looking to build a team around him over the next few years and he certainly has the potential to go a long way in the game, so his rookie Prizm card value could rocket. 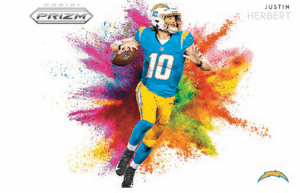 If you’ve been impressed with Burrows, say hello to a guy that’s gotten off to an even better start. While Herbert didn’t have the advantage of starting week 1, he has certainly made up for lost time. Just take a look at his eye-popping numbers. By the way, he is also now the favorite to become Offensive Rookie of the Year. If he continues this trend his Prizm rookie cards will be incredibly valuable right out of the gate. 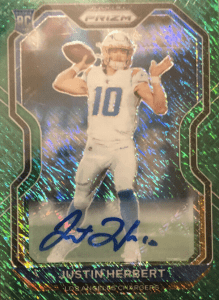 Update 12/03/2020: The Green Shimmer FOTL Justin Herbert 2/5 card is currently taking bids on eBay and is up over $11,000 with more than a day left. WOW! Safe to say the future Rookie of the Year winner is a hot commodity. 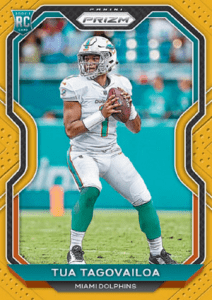 The Dolphins drafted Tua Tagovailoa second overall and recently named him the starting quarterback. Add that to the fact that the Dolphins are improving overall as a team, and we wouldn’t be shocked to see a deep playoff run out of Tua and the Dolphins in the next few years. Which would be a great thing indeed if you land one of these. 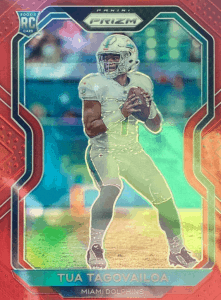 Update 12/03/2020: Both the Red Refractor and No Huddle Green Prizms have already been plucked from the packs of some lucky buyers. Which finds are in store in the days ahead? We’re excited to find out!

The most exciting non-QB rookie is probably Clyde Edwards-Helaire. Picked by reigning Super Bowl champions the Chiefs as the last pick of the first round, the running back has quickly established himself as a vital part of the offense. While the back’s opportunities have been limited (unreasonably so in our opinion), this would be a great card to have in your portfolio if he performs strongly in the playoffs.

In addition to these rookies, there will be plenty of other big names. For instance, Jonathan Taylor, CeeDee Lamb, J.K. Dobbins, and D’Andre Swift are all players you can expect to find. 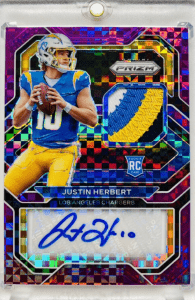 There’s A LOT going on with this card. In a very good way though. You got your autograph, your material, your unique Prizm color, and of course a RARE CARD. Not to mention its manic pinball machine layout. What a card. What’s not to like? of course with the way Herbert is playing it doesn’t come cheap. Price is approaching $5,0000 even for a non-grade. 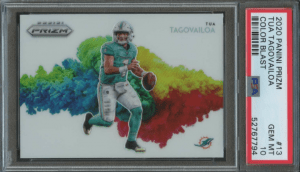 Of course, we gad to have a Color Blast of one of the top rookies. Just like the card above, it’s hard finding something NOT to like. It’s a rare card with an eye-catching style that features Tua scrambling outside of the pocket looking for a target. Something we’re sure to see plenty of in the years to come! Come prepared to spend if you want it.

Note: Joe Burrow would be on this list if not for his devastating injury. By this time next year, we’re sure his Stained Glass card will be the talk of the town. Consider this a great BUY LIW opportunity for Joe’s first-year cards.

Panini Prizm is a set that’s ALWAYS in high demand. This year is no different. Therefore, if you get in early there’s plenty of reason to believe profits are in your short-term future. Consider grabbing an impact rookie once some become available. By the end of the season, you’ll likely be happy you did!

Since Panini Prizm has been an incredibly reliable set, these strategies depend more on the player than the brand. If you’re considering such a strategy focus on either bonafide Hall of Famers or younger players who appear on the cusp of becoming elite and hope they don’t let you down. Panini Prizm certainly won’t.