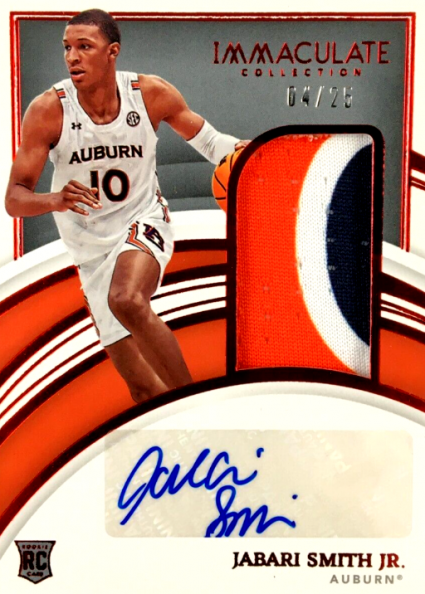 Just like fellow rookie and first round pick Paolo Banchero, Jabari Smith Jr. wasted no time putting a target on his back. From the minute he took the court in the opener one thing was clear. Jabari belonged in the NBA.

We like many other collectors believe even bigger things are store for Smith Jr. in his rookie season. Therefore we’d expect that the Jabari Smith Jr. rookie card market is going to be quite active all season long. And that’s precisely why we’re about to cover the young forward’s top cards. Since there will be more arriving all season long expect this post to be updated periodically. Now let’s find out what cards are available. 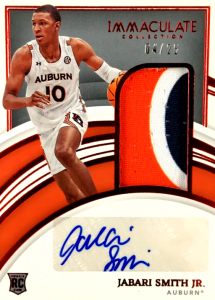 At the moment this is easily one of the best Jabari Smith Jr. rookie cards available. As it says in the name, the brand delivers an immaculate display of style and colors and includes cards with both an autograph and game material. There are several options to choose from including some rare parallels and exciting split cards featuring other top rookies. 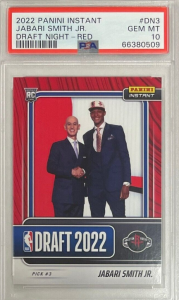 The first Jabari smith Jr. rookie card options to hit the market provides fans with an instant shot of the 2022 NBA draft night excitement. A perfect card for Houston fans who want to be reminded of how they fell when Smith’s name was announced at the podium. From how he’s playing so far, the image could be one well worth memorializing. 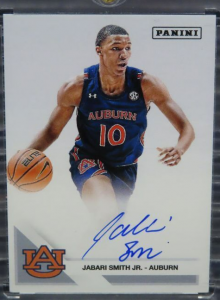 Last but not least we have The National. There are a variety of different cards in this set including the on-card autograph option like you see here. Additionally, the elusive Splash of Color SSP is always one to keep your eye on. However, you may have trouble taking your eyes off of it as it’s truly a spectacle to behold.

There certainly aren’t many options out at the moment but soon enough there will be PLENTY of amazing sets to choose from. Here are some to keep your eyes peeled for.

An assortment of brands from Panini fill the inside of each pack. So whether your hoping to get a preview of Mosaic, Illusions, Select, or Prizm, Chronicles has you covered. While these won’t feature Smith in his Rockets uniform, you’ll be able to get a glimpse of live action shots from his days at auburn.

An offshoot of Panini’s flagship brand that captures the excitement of the league’s top rookies in their college glory. As far as style goes they’re not exact matches of the mainline set but offer just as much quality.

A collection known for it’s famous Rookie Ticket lineup is sure to be loaded with some of the best “draft pick” Jabari Smith Jr. rookie cards.