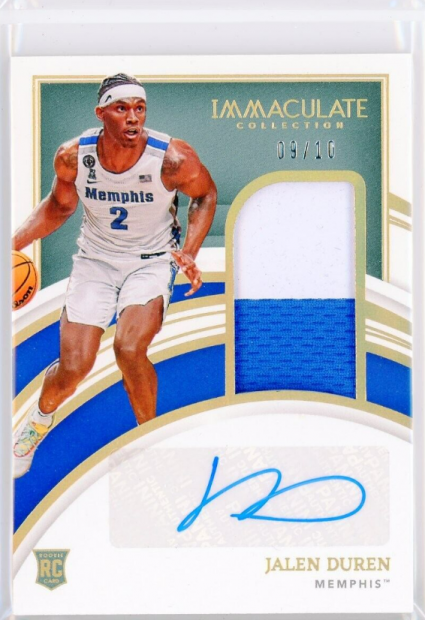 Talk about an entrance! In case you missed it Detroit’s new big man Jalen Duren began his NBA career in a BIG way. So much so that he became the youngest Piston of all time to record a double double. And that was just the first night. Yes, it appears big things are to come for Detroit’s first round pick and so far the fans have got to be thrilled. You know who else should be thrilled? Anyone who had the foresight to grab a Jalen Duren rookie card before the opening night eruption!

However, if you’re like most collectors you likely haven’t come across a first year Duren card. Why? There’s not many out there at the moment. While the options are scarce, there are a few great choices to target if you want in at the ground floor. Let’s see what’s out there! 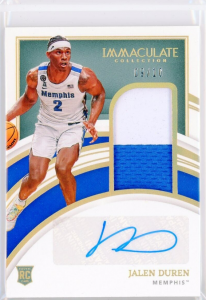 Without a doubt the best Jalen Duren rookie card option in the early going. Immaculate is known for it’s clean design and a generosity when it comes to game materials on the card. In addition to the material you’ll also have the option to find a card with Jalen’s autograph. Regardless of which card you choose this will remain one of the hottest collegiate sets this year. 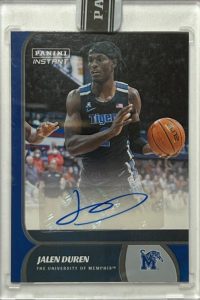 When it comes to NBA rookie cards, the name says it all. Panini Instant is known for getting the drop on first year players with many if the cards being draft night celebrations. While the card above is an action shot, it still represents one of the first Jalen Duren rookie cards to hit the market. A great choice for casual investors. 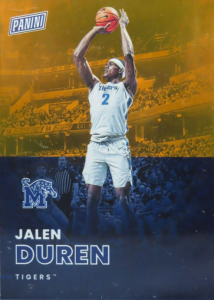 As far as pure style goes this is our favorite so far. The photo shows the big man about to drain an easy jump shot in the face of an unlucky defender. In addition to the cool photo we’re also treat to a color combo that really captures the atmosphere of being at the game.

Looks aside, these aren’t going to set you back an arm and a leg. Even for the rare parallels. A perfect card for anyone who’s got a few bucks to spend and wants to add a Jalen Duren rookie card in the early going.

A collection that features a preview of many of Panini’s top brand. Since this is a “Draft Picks” set you can expect to find Duren in his college uniform. Nonetheless there are always plenty of great options with big name collections such as Panini Prizm and Panini Select making an appearance. Additionally, look for some autographed Jalen Duren cards and plenty of rare Prizm varieties.

As far as the release date does keep your eyes peeled as the set should arrive in late 2022.