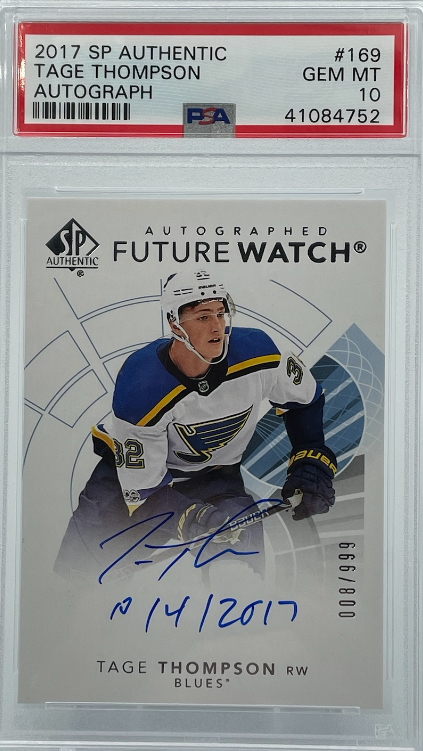 Anyone who’s capable of scoring 5 goals in one hockey game is someone who should be worthy of your attention. Especially when 4 of those goals come in the FIRST PERIOD of play. In case you haven’t figured it out by now the topic of today’s conversation is going to be focused on the best Tage Thompson rookie cards to collect.

While the 6th year center out of Phoenix had a ho-hum start to his career, it’s safe to say something clicked in 2021. In his breakout season Thompson netted an admirable 38 goals to go along with 30 assists across 78 games. And in 2022 things aren’t just clicking for the Sabres emerging star, they are straight POPPING OFF. The kid is averaging well over a goal in every other game played and is fast becoming the talk of the league. If the torrid pace continues one thing’s for certain: you’ll be one happy camper if you’re the proud owner of one of the following Tage Thompson rookie cards! 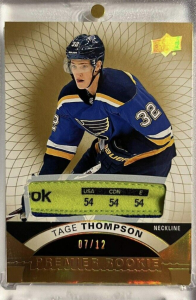 When it comes to style it’s hard to pass on Upper Deck Premier. Just take one look at the Gold Patch variation above and you’ll see what we mean. Thompson is front and center and is in now way overshadowed by the card’s other features. And that’s saying a lot because the gold bottom edge and that memorabilia strip certainly beg for attention. If your sights are set on a Tage Thompson rookie card this should be one of the first places you look. 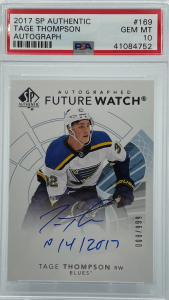 Now we move onto what is in our view the BEST Tage Thompson rookie card on the planet. None other than SP Authentic. Famous the world over for it’s coveted Future Watch line up, SP delivers year in and year out when it comes to the best NHL rookie cards. And with such prestige comes BIG TIME values. If you’re after something you can sink some real money into look no further. 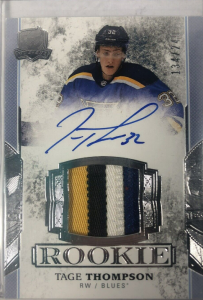 Is hard to think of a better name for a set of hockey cards than Upper Deck’s The Cup. Afterall, it’s what any true competitor is after. While these may not hold as much prestige as SP Authentic, the collection makes for a great value play for collectors who want an autograph or some memorabilia for a more affordable price. Additionally, the cards are loaded with style. Truly one of the best Tage Thompson rookie cards on the market. 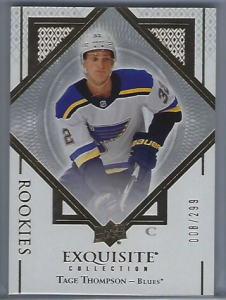 While it falls just outside of our top three we can’t help but show some love to the 2017-18 Exquisite collection. The set has an amazing array of rookie lines and includes a variety of numbered options to choose from. It also makes for an affordable buying option with many parallels going for well under $100. However, if you are looking to spend a bit more cash be sure to take a look at Exquisite’s “Rookie Signatures” line up.