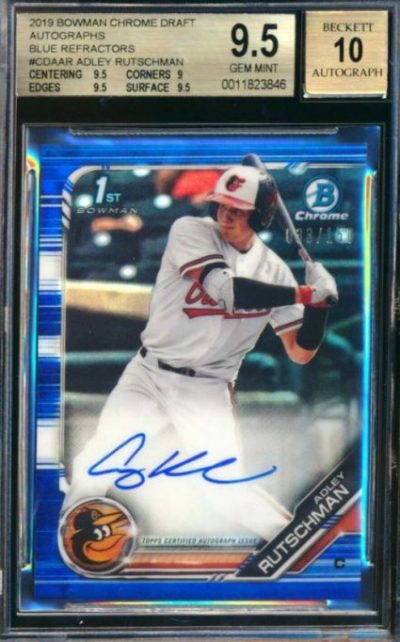 When it comes to the Rookie of the Year race, only Julio Rodriguez sits above him as the favorite to take home the award. Therefore, it comes as no surprise to see many collectors excited about investing in the best Adley Rutschman rookie cards on the market. But should they be? Let’s find out!

Adley Rutschman Rookie Card: To Buy or Not to Buy

When looking at what Rutschman did at Oregon St., it’s easy to see why scouts are calling him the best #1 pick in the MLB Draft since Bryce Harper. In his last year of college ball, Rutschman humiliated Pac 10 pitchers to the tune of 17 home runs in only 185 at-bats. Not to mention an absurd video game-like .411/.575/.751 triple slash. On top of that, scouts say his leadership is off the charts and he’s a more talented catcher than even Buster Posey. So it’s easy to see why the Orioles snagged Rutschman with the first pick.

Right when everyone was getting excited by the prospect of investing in the best Adley Rutschman rookie cards, his first taste of professional competition arrived. While it was an incredibly small sample size, Rutschman didn’t exactly live up to expectations on his first go-round in the minors. In 2019 he spent time in 3 leagues and posted .254/.351/.423 with only 4 home runs. On a more positive note, Rutschman killed it in the only league he had any time to settle into by hitting .325/.413/.481 over 77 at-bats in the NY-PA League.

What we said during spring training 2021:

“So while we’re not exactly thrilled with Rutschman’s first year of minor league baseball, we’re certainly taking it with a grain of salt. Since he only compiled 130 at-bats while bouncing around to 3 different leagues we have ZERO PROBLEMS giving Adley a pass here. In 2021 he’ll have more time to establish himself in AA and we’d expect the end result to be closer to his performance in the NY-PA league we mentioned earlier. Therefore, despite the slow start in 2019, we’ll be giving ourselves the green light to pick up a few of the following Adley Rutschman rookie cards!”

We like the way our assessment is turnedout. Adley proved his worth in 2021 by smashing towering home runs, getting on base, and playing great behind the plate. And let’s not forget about that monster 5/6 and 2 home run doubleheader. Safe to say he had zero problems with minor league pitching.

Question of the Day: Which Top 3 prospect will have a better 2021, Adley Rutschman or Spencer Torkelson

This is Adley’s “1st Bowman” card as you can see by the logo in the upper left-hand corner. Therefore, you can expect it to be the most collectible of all his prospect card editions. Value varies depending on the autograph and/or refraction situation, but cards that have both features can easily exceed $2,000 with a good enough grade. Consider the autographed base card or a non-auto refractor if you’re not ready to go all-in. 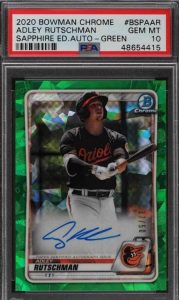 As you’d expect, the 2020 Bowman Chrome set isn’t on the same level as the 2019 set when it comes to the hottest Adley Rutschman rookie cards. For instance, there are plenty of cards with both a refractor and an autograph available for just a few hundred bucks. So if you want that auto-refractor combo without paying the big dollars, look no further. 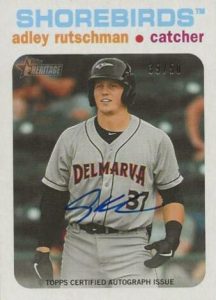 Here we see Adley in his Delmarva Shorebirds uniform – the highest-level minor league team he’s played for so far. We love the vintage style offered by Topps Heritage and love the fact that the set offers an image variation where we finally get a glimpse of Rutschman in his catcher gear. Even some of the highest valued Rutschman cards from this set will only set you back a hundred bucks or so. Low-hanging fruit never tasted so good! 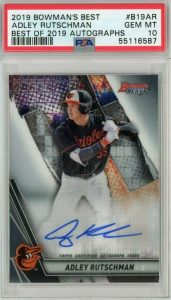 Another collection that’s more accessible for folks who don’t have thousands of dollars to throw at some of the best Adley Rutschman rookie cards. The autographed base card is shown above but there are a variety of refractors and some cool inserts as well. Plenty of options for $200 or less.

“Only a slight hesitation here due to the underwhelming 2019. That said, Rutschman clearly has the ability to light up AA and we expect that he will. A solid 2021 season should generate some decent short-term gains. And if he absolutely crushes it and earns a late-season call-up? $$$.”

Safe to say that slight hesitation is gone. Rutschman’s 2022 rookie campaign has solidified the youngster as a bonafide superstar. 2023 looks awfully rosy.

We like this strategy best as this gives Rutschman plenty of time to REALLY hit his stride in the big leagues. All-Star games and even MVP votes don’t appear to be off the table at this point.

If you’re thinking past 3 years then you’re banking on Rutschman turning into one of the greats. He’s more than capable of doing so and if he’s the player everyone seems to think he is, this is where you stand to make the most profit. However, this is also the riskiest of the 3 options as we all knowhow an untimely injury can throw a wrench into things. We prefer one of the safer strategies but certainly wouldn’t blame you for stashing a few away for the long run.