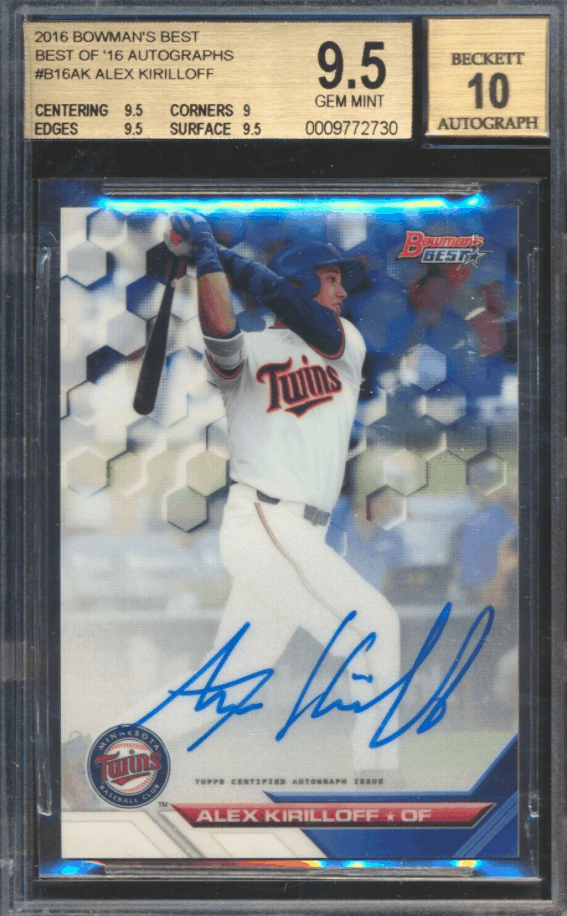 When it comes to the Alex Kirilloff rookie card market, now may be a good time to pump the breaks. The second wrist injury and all seems a bit scary until we get some news. But tt wasn’t long ago when Alex Kirilloff rivaled the likes of Wander Franco and Luis Robert for the honors of the game’s top prospect. Then came 2019. In what turned out to be a disappointing season down on the farm, Kiriloff saw his power numbers dwindle to just 9 long balls and 43 RBI over 375 at-bats. Compare those numbers to his 13 home runs and 56 RBI in just 256 at-bats in 2018 and the regression becomes painfully clear.

While his performance by no means met expectations that year, the likely cause appeared to be a menacing wrist injury that zapped Alex of his power stroke. And right when we were seeing a 2021 performance from Kirilloff that signaled a MASSIVE rebound in power from a hitter that is considered to be one of the best in the minor leagues, boom – another wrist injury. The SAME wrist too. We all know he’s capable of coming back from it as we saw in the last couple of weeks, but the fact that it’s the same wrist that screwed up his 2019 should alarm you. So hold off on buying one of these Alex Kirilloff rookie cards until we get some sort of update. But once he’s cleared, buy with confidence. Or you could just treat the latest injury scare as a buying opportunity if you see anyone in panic sell mode!

Related: Jarred Kelenic has shot up through the ranks of the top MLB prospects. Here are a few of his best rookie card investment options! 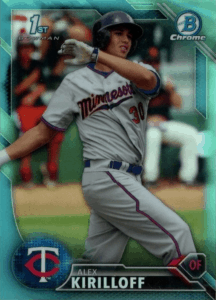 This set will likely be responsible for some incredibly high-priced cards in the very near future. There is no shortage of talent and there are plenty of players who are now just starting to embark on their MLB careers. Alex Kirilloff started that journey last postseason when he became the first player ever to make his debut in a playoff series. He’ll look to continue in 2021 at some point in the season.

As far as prices go, expect to pay in the $250-$500 range for some of the more common autographed refractors. If you’re really high on Alex consider picking up a gold or black refractor for a few hundred more. 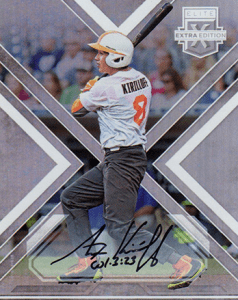 This Panini edition DOES NOT disappoint (unlike the bonus episode of Tiger King). It includes a treasure trove of the game’s top prospects, all of which are available with that all-important ink scribbled across the surface. In 2019 the value of the Pete Alonso version of this card grew by leaps and bounds. This year it could be Alex’s turn.

The card above is the Trinity Silver Spectrum option. You simply cannot beat the authenticity of this card. A little light-hearted bit of bragging and a powerful verse from Colossians makes it a MUST OWN. Oh, and Alex’s signature is also a welcome feature. 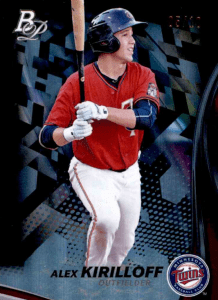 Okay, so in the real world, the value of platinum far exceeds that of chrome. However, Bowman-land is a completely different story. So if you’re looking for an Alex Kirilloff rookie card from Bowman that’s easy on the wallet this one is for you. Even the ultra-rare Platinum Cuts can be picked up for less than $200. 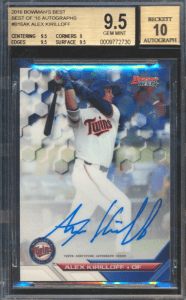 Hard not to buy this card just for how well it captures that powerful follow-through. Add to that an autograph and you have a card that will look amazing in your baseball card display case. Many options for less than $100. 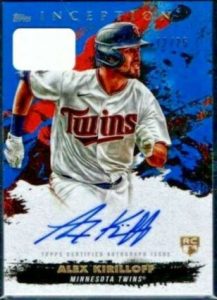 A high-end collection for a high-end rookie. What could be better? There are oh so many great Alex Kirilloff rookie card options to choose from here. so much so that you may have a hard time deciding on just one! Either way, you’re going to have no problem finding an autograph and a patch in this set. The wheelhouse you’re looking for here is between $200 and $500. Dig in! 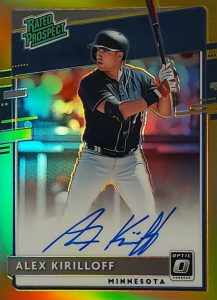 You didn’t think we’d forget, did you? While not nearly as valuable as some on this list, we couldn’t bring ourselves to excluded the ole’ Rated Rookie. Just take one glance at that card above and try to second guess the decision! Anyways, even the rarest from this collection are low-hanging fruit as the /10 Gold card you see here sells for under $200. Look at it as a chance to get the ultimate bang for your buck!

More of a throw-back kinda guy? Check out these Scottie Pippen rookie cards!

Picking up a rookie card of a guy who was once arguably the top prospect in the game seems to be worth the risk created by the latest wrist injury. However, we’re going to hold off until we not only hear good news but SEE it as well. However, if you decide to take a chance and buy from someone who is unloading due to the injury, you could see some very nice gains once Kirilloff again regains his swing. 7/10

While many collectors may be a bit wobbly in the knees over the injury, just remember what ole’ Buffet always says: be fearful when others are greedy and be greedy when others are fearful. When it comes to Alex Kirilloff Rookie Cards, the last half of the quote seems to fit best! Whether or not it happens this year, you’d have to figure the guy will get healthy and some point in the mediuim term. And then hopefully he starts raking and never looks back. 8/10

Don’t forget to check out our other MLB rookie card reviews!