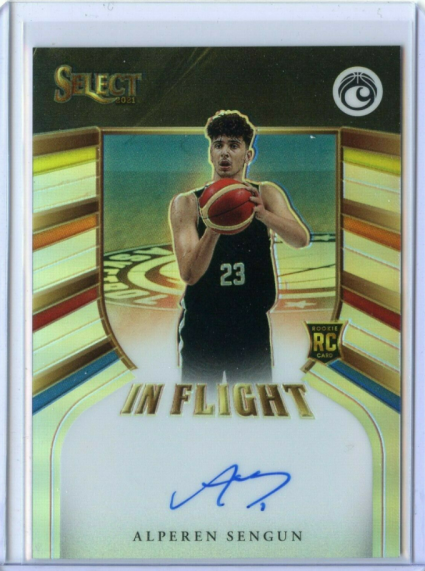 He hasn’t been getting much playing time in his rookie season but has done a decent when on the court for the lowly Rockets. While the thought of buying an Alperen Sengun rookie card is far from the thoughts of many collectors, there is some hope for a breakout down the road. But HOW far down the road is the question. The Rockets are once again abysmal and it’s clear they’ll need to surround their first round pick with much more talent before either Sengun or his new team start making any real head way. However, the slow start could create a decent buying opportunity for anyone willing to bet that better days are coming. Here are a few Alperen Sengun rookie card options to consider if that’s you! 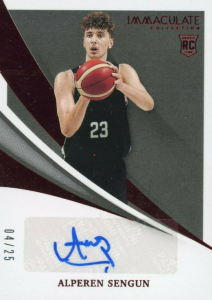 So far this is the best set for anyone who’s wants to spend a decent chunk of change on their first year Sengun card. Immaculate is an extremely limited collection loaded with plenty of valuable cards. The card above is autographed with a print run of just 25, making it one of the most valuable featuring Sengun we’ve seen so far. It has a clean, crisp design and shows Alperen at the line looking to swish a free throw. 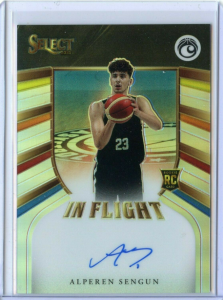 We love the versatility of what Chronicles has to offer here. The collection brings a mix of cards from across all the coming Panini brands in 2022 that will make any basketball card fan salivate in anticipation. One of our favorites from the set is the Panini Select In Flight insert. It’s also one of the most valuable, with the /99 version already topping $300 on eBay. Of course, with a collection like Chronicles there is always a variety of cheaper options to choose from as well so you won’t have to look far for a more casual investment. 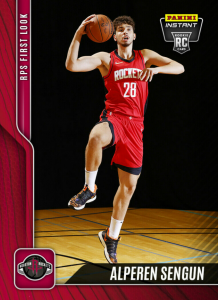 If you’re looking for the first of the first Alperen Sengun rookie cards, look no further. Panini Instant is known for capturing the excitement of the draft by pretty much releasing cards of the most high profile players INSTANTLY. While there aren’t as many “high end” cards in this set, there are plenty of great options for anyone who has a hankering for a smaller buying opportunity. 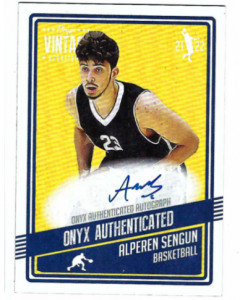 There aren’t a whole lot of options in the Onyx Authenticated collection, but as you can see the brand offers a cool retro look that is sure to please the eye of any old school collector. And as you can see from the card above, autographs are available. If you’re in the mood for a cool looking card with some ink that also won’t cost an arm and a leg, this may be you’re best bet so far.

Question of the Day: Which first year big man will have the better 2021-22 season, Alperen Sengun or Evan Mobley?

If Sengun continues only get a moderate amount of minutes per game the chances for any real gains in the short term seem to be stretch. However, increased time on the court should produce an uptick in production that could lead to some renewed interested in the Alperen Sengun rookie card market. Either way, there is some risk involved anytime you’re dealing with an unproven rookie and a longer term approach seems like the better option to us.

If Sengun is one of the catalysts who puts the Rockets back in the playoffs in the coming years today’s prices will prove to be a steal. However, you’ll need to consider whether or not Houston can rebuild that soon. If not, you’ll be banking on Sengun’s individual success. And he doesn’t get the help he needs, that could be a very dicey situation.