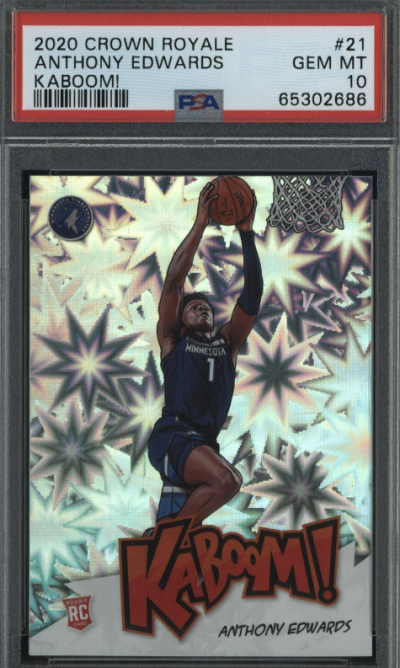 In the blink of an eye, Anthony Edwards cemented himself as player that is going to be wowing fans for a LONG time to come. While his rookie season may have gotten off to a slow start, Edwards was LIGHTS OUT in the second half averaging nearly 27 points per contest, including a masterful 42 point barrage against the suns on March 18th. On top of that,he almost snuck in a back door Rookie of the Year award after Ball fractured his wrist in a late season matchup with the Clippers.

Since then, the Anthony Edwards rookie card market has since been generating plenty of attention. Including plenty of eye-popping sales prices. And as you know, attention is usually a very positive thing if you happen to own one of the cards it’s focused on. Therefore, we expect to see many investors rushing to snag some of the best Anthony Edwards rookie cards in hopes of even more success in the future. Should you be one of them?

We think so. Edwards was the first overall pick in the draft and is one of the most electrifying players in the league. And if you watch this insane slam dunk you’ll be reminded of exactly WHY he was the number 1 pick. These facts, along with an early track record of success suggest there’s still be plenty of chances to profit off an investment in one of Edward’s first-year cards. Now let’s see what’s available so far!

While not the number 1 pick overall, Brandon Clarke is a former first-rounder.

Here are some Brandon Clarke his rookie cards to consider! 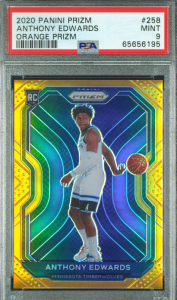 This is the go to set if you’re after the BEST of the best Anthony Edwards rookie cards. Not only does Prizm offer a wide variety of valuable parallels, but it also comes hard with plenty of coveted autographed cards. Any collector who’s goal is a serious investment should start the search here. However, the next collection on the list is arguably just as good. 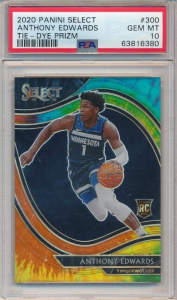 Similar to Prizm, Panini Select offers a stunning array of valuable cards including both some hard to come by parallels and a variety of rare autographs. A true powerhouse within the industry, Select is known for it’s crisp and sturdy feel along with a flashy style that grabs your attention and won’t let go. 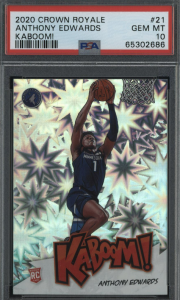 While not our favorite collection, Crown Royale does offer our favorite individual card. The famous Kaboom! insert has risen in popularity over the years and is not a tried and true investment option when it comes to NBA rookie cards. The flashy style may not be for everyone, but most people seem to enjoy it immensely. Just take a look at what these sell for if you don’t believe us! Arguably the best Anthony Edwards rookie cards out there. 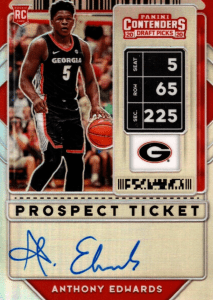 Just like in our LaMelo Ball rookie card review, Panini Contenders leads the way as far as value is concerned. The most valuable cards in the set are autographed and feature various parallels of one of the “Ticket” options. So far we’ve seen these breach the $1,000 threshold with ease. Expect that number to rise. 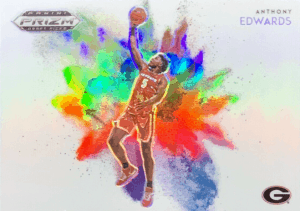 The Color Blast insert shown above is our favorite of the set. It’s rare, valuable, and is a marvel to look at. While this is our favorite option, there are plenty of others we like. The most popular of which shows Edwards on a fast break with a look of sheer determination in his eyes. There’s a wide array of values depending on which Prizm but some of the less common ones are approaching $1,000. 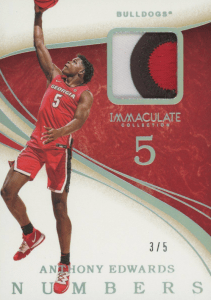 Such a great set for investors looking to make a low-value investment. There’s plenty of options to choose from with patches, autographs, and even multiple-player mashups. The best part? You can get many of these for just a couple of hundred bucks right now. Not bad for someone who only wants a beginner’s taste of the Anthony Edwards rookie card market.

We’ve already covered the Panini Prizm Draft Picks set but we need to draw attention to these two inserts. While we don’t like them as much as the Color Blast, both deserve some individual attention. 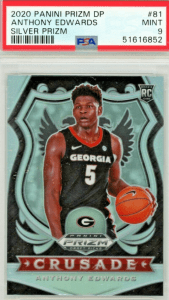 The Crusade insert shows Edwards standing with the ball while reading the defense. The backgrounds vary depending on which card you’re looking at but all will have no problem capturing your attention. Short print runs as well. A must-have card. 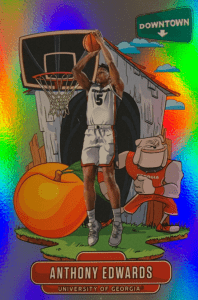 Meanwhile, the Downtown insert is one that we ALMOST like as much as the Color Blast. These have a super short print run and feature Edwards popping a jump shot while in front of an animated background that includes some sort of run-down shed and a Georgia peach. A fun card to look at with a low to mid-range price tag.

Read our 2020-21 Panini Prizm Basketball review for the release date and a preview of what cards you can expect! 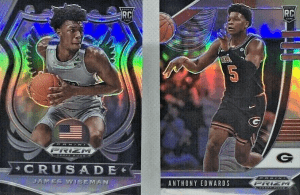 For whatever reason, there isn’t nearly as much interest in the Anthony Edwards rookie card market as that of James Wiseman’s. While there isn’t a whole lot separating how effective either have been in their first seasons, there sure is a lot separating the value of their rookie cards. For instance, Wiseman’s Panini Prizm Gold Auto /10 currently seems to be at least TWICE as much as Edwards. That doesn’t seem fair to us. Perhaps this only illustrates a buying opportunity.

As we just eluded to, the low price of Edwards’ rookie cards in comparison to Wiseman’s could signal a decent buying opportunity. Edwards is scoring points and with more playing time he should touch up some of his early-season weaknesses. The athleticism and talent are obviously real. And so is the opportunity. This category goes to Edwards.

Hard call. Both have what it takes to make themselves a staple in the league for many years to come. We’ll give the slight edge to Edwards here. If both players live up to their full potential, the highlight reel moments from Edwards might be the difference on which player’s cards are more valuable years from now. 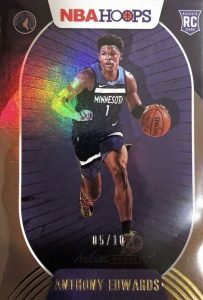 Until this point, we’ve featured only prospect cards. However, there are now a few true Anthony Edwards cards from Panini Hoops on the market featuring the RC logo. The one shown above is a rare parallel of the base card with a print run of just 10. While this is usually one of the first sets to hit the shelves, it certainly is not the best. However, it certainly meets the challenge of holding us over until some of the big-name releases start showing up. In addition to the regular rookie card, Panini Hoops also offers are rare “Rookie Ink” insert that includes Edwards’ autograph (hence the ink part of the name). 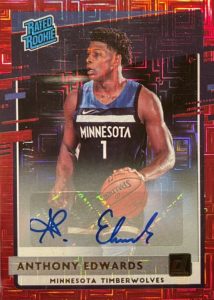 The latest set from Donruss Basketball has finally arrived on the scene and it’s loaded with plenty of the best Anthony Edwards rookie cards for casual collectors. For instance, the Rated Rookie card shown above comes in an insane amount of parallels and is available with or without Edward’s autograph. Prices vary with some of the more common cards going for just a couple hundred bucks and the ultra-rare exceeding $3,000.

You can feel good investing with a short-term approach simply due to Edwards durability. Add to that his exciting play and potential to become even better and we think you’ll be just fine.

Taking the recent hype factor out of it, Edwards now seems poised to take his game to the next level by establishing himself as an elite talent over the next couple of years. And if your Anthony Edwards rookie card is a sought-after item at this time next season you’re gonna have a tough decision to make. Take what is sure to be nice profits or keeping holding? If you do decide to hold and make it a medium-term investment, a year-by-year approach makes the most sense. If he keeps delivering the goods, keep holding. At the end of the day, it could be well worth it!

Let’s see how it goes over the next couple of seasons before we go here. However, we wouldn’t be surprised if he turns some performances that makes us start thinking the best Anthony Edwards rookie cards may be worth holding onto for the long haul.