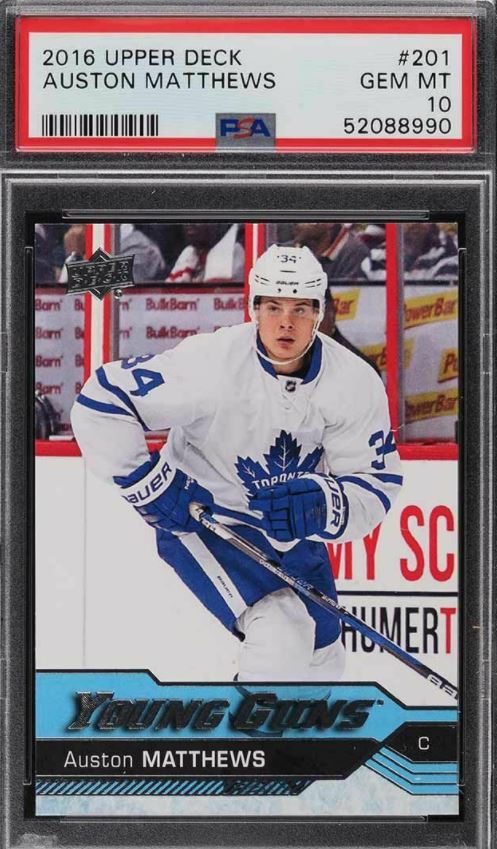 There are sure to be plenty of folks looking to pick up an Auston Matthews rookie card at some point in the near future. Why? Because in case you haven’t noticed, Auston Matthews is having one heck of a season. He’s got a comfortable lead in the race for the Maurice Richard Trophy and is putting up the best numbers of his career. And while there’s still plenty of hockey left to play, here’s what Matthews has been able to accomplish so far this season.

Let’s start with what Auston Matthews does best – putting the puck in the net. In just 36 games season, Matthews has notched 27 goals and is on pace to make a run for that elusive 60 goal season. And while he’s not known for being the setup man, Matthews is right around his career pace for assists with 19 on the year. Finally, let’s not forget about plus/minus. So far Matthews sits at a whopping plus 16 could easily career-best of plus 25.

As you can see, Matthews is having a very special season. On top of that, the Maple Leafs are one of the best teams in the NHL. And maybe, just maybe, they’ll FINALLY end that epic championship drought. The stage is set for an amazing season for both Matthews and the Leafs. A great reason to consider picking up one of the following Auston Matthews rookie cards!

Related Content: Most Valuable Hockey Card from the 80s 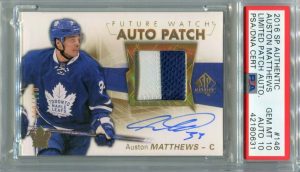 Serious investors who are looking to drop some decent money into an Auston Matthews rookie card investment have plenty of high-value options to choose from in this set. So if you’re looking to spend not hundreds but THOUSANDS, start here. 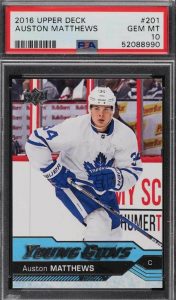 An incredibly popular card whose value depends greatly on what kind of shape it’s in. For instance, ungraded versions sell for as little as a couple of hundred bucks and can make for great investment opportunities for casual investors. Meanwhile, there have been BGS 10 Pristine grade cards that have sold for over $3,000 recently. Quite the gap! 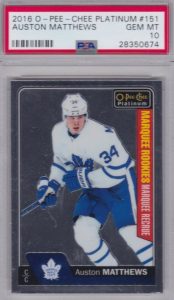 A perfect collection if you’re looking to spend between $100-$200 for a high-grade Auston Matthews rookie card. So if you don’t have the kind of bankroll to pull a 10 grade Young Guns, why not take a look at good ole’ O-Pee-Chee? Just what the doctor ordered!

Believe it or not, Tim Hortons also has its hands in the Auston Matthews rookie card market. And it’s a pretty cool card, to be honest. It’s made by Upper Deck for the 2016-17 season and features Auston with a slicked-back hairdo while he’s calmy smiling for the camera. As far as value goes, these can approach the $1,000 mark. And that’s WITHOUT a grade. Not bad for a redemption card from a coffee merchant. While this isn’t one of our Top 3, it’s a cool little card that’s worth a speculative play.

If you’re thinking about a short-term play with a purchase during the regular season, you’re hoping for that Maurice Richard Trophy and a deep playoff run. Or better yet, a 60 goal season and a Stanley Cup. Either way, there should be a little money to be made between now and the end of the season. 7/10

We prefer this strategy over a short-term play as it gives Matthews a little more time to accomplish some of those big feats that’ll really send prices soaring. If both Matthews and the Maple Leafs can hold onto the momentum they have this year we could see some remarkable accomplishments over the next few. 8/10

Auston Matthews has been one of the league’s premier scorers every year he’s played in the NHL. He’s only 23 and already has close to 200 career goals. Just wait until he hits his prime. The point is, he’s well on his way to a Hall of Fame career with the potential for some big milestones along the way. Don’t hesitate to stash a card away for the long term. 8/10