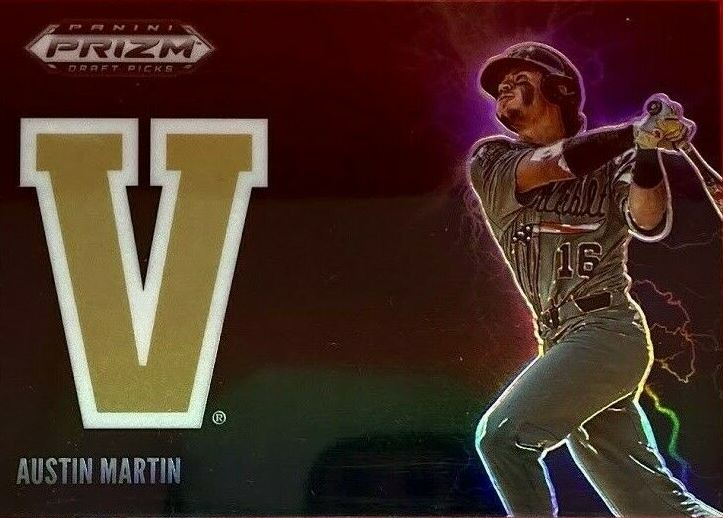 While the thought of investing in an early Austin Martin rookie card likely hasn’t crossed your mind, it soon will. Why? Only because he is what many call the best pure hitter in the 2020 MLB draft. That and because at age 22, his time in the minors is sure to be brief. Yep, Just like Spencer Torkelson and Heston Kjesrstad, Martin is a former college stud who pretty much had his way with amateur-level pitching throughout his short stay at Vanderbilt. And if that .392/.486/.604 triple slash is any indicator of what’s in store for AA pitching in 2020, a big-league call-up may happen even sooner than his current ETA of 2022.

So count on the Austin Martin rookie card market getting red hot at some point over the course of the next year. In fact, the only thing that may be able to stop that from happening is a lack of buyers due to eBay providing a bunch of luxury automobile search results when you try to find his cards. Yes, that really happens (Aston Martin). So do yourself a favor and don’t drop $200,000 on a mid-life crisis mobile. Rather, spend far, far less on one of the following amazing investment opportunities!

Now would be a good time to pick up a couple of these Zac Veen Rookie Cards! 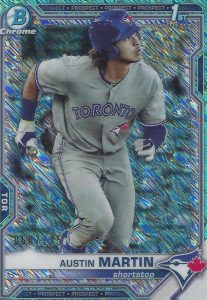 While many of the very rare refractors haven’t hit the market yet, there are still a few that have surfaced. Such as the /125 Aqua Shimmer refractor shown above. This particular card is valued at right around $500 and we expect that price to rise throughout the year as long as Martin has even a modicum of success. And probably even if he doesn’t.

In addition to this option, there are plenty of base cards or more common refractors available for around $100. By the way, if you feel like going BIG and don’t mind waiting, score one of the many Topps Redmemtpion cards for sale that will net you an autograph refractor Austin Martin rookie card. Prices vary but we’re seeing the Gold refractor as the high end at around $4,000 and the standard refractor auto bringing up the rear at around $1,000. 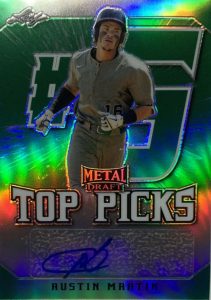 Now we move onto an earlier, and MUCH more affordable collection. For instance, even the autographed 1/1 refractors from Leaf Metal sell for under $500. Looking to spend less? No problem! Even $25 will get you a more common refractor with an autograph. Try getting that bang for your buck with a Bowman! You won’t get a card that’s officially licensed by the MLB, but if an autograph and rare parallel are important to you, and you don’t have a big bankroll, hone in on one of these. 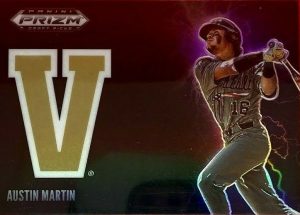 Just like Leaf, Panini doesn’t have an official license for baseball cards. Also just like Leaf, this is another true value play. All kinds of rare refractor autographs selling for just a couple hundred. Just to show you how much value an official license creates. Check out these Panini Prizm card values for a sport the brand has a license for: Best Panini Football Cards to Buy 2021. Enough said?

Although he’s off to a slow start in his first few professional at-bats for the New Hampshire Fisher Cats, it’s only a matter of time before Martin starts hitting. Once he does, expect values to rise throughout the summer. The offseason would be a great short-term exit point for some EASY profits. Just be sure to buy back in before 2022!! 9/10

If you don’t sell your Austin Martin rookie card in the short term, there should be even more money to be made if you have the patience to hold into next season. We’re expecting a 2022 call-up for Austin Martin and a strong 2nd season accompanied by news of heading to Toronto should generate much higher values than we’re seeing today. And if he goes on to light up the majors as a rookie? Icing on the cake! 9/10

We’d advise focusing on the short to medium-term strategies for right now. There’s not a whole lot of sense having much money tied long term, especially when you can always re-enter the market after you see if he’s able to handle MLB pitching. 5/10