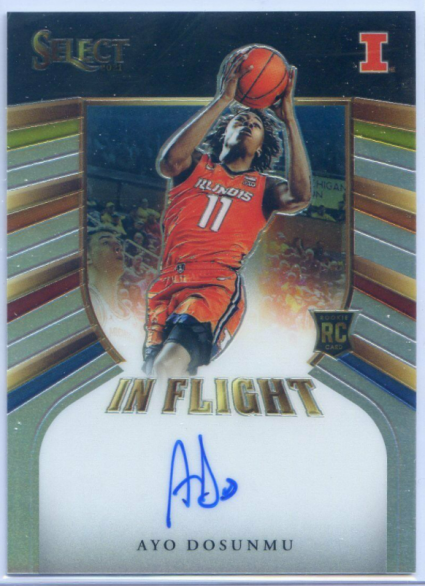 The hometown hero who Bull’s grabbed with their 2nd round pick of the 2021 NBA Draft is already starting to turn heads. If he keeps it up, there will be plenty of folks looking to grab an Ayo Dosunmu rookie card or two. But can Dosunmu force his way into the minutes he needs to become an impactful rookie in 2021-22? While the second rounder surely wasn’t the most talked about rookie coming into the pre-season, Dosunmu has shown he’s more than capable of rising to the occasion.

For starters,  Dosunmu has already taken minutes away from Troy Brown Jr. who was ahead of him in the depth charts. On top of that, Ayo is showing the ability to play a great all around game. Something we saw when he put up 15 points and pulling down 7 boards in just 20 mins in a lopsided victory over the Nets. If you think this kind of play isn’t sustainable for the Bull’s new guard, just take a look at his college resume.

Ayo Dosunmu played 3 seasons at Illinois and only got better with age. In his freshman season Ayo averaged 13.8 points per game and took a big leap forward the next season by averaging 16.6. But Dosunmu wasn’t done there. In his third and final season of college ball, Ayo put up a staggering 20.1 points per game to go along with 5.3 assists and 6.3 rebounds. Sounds like the definition of an all-around player to us. Safe to say if that all-around play continues, we’ll be forced to consider loading up on some oft he following Ayo Dosunmu rookie cards! 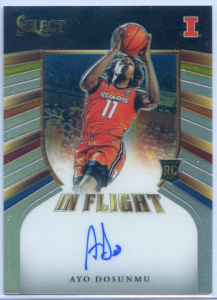 There’s no doubt Panini Chronicles is the early front runner when it comes to the up and coming batch of NBA rookies. That will certainly change once more of the big name collections arrive but it’s still a great option for anyone looking to pick up some rookies cards before the hype of the regular season sets in. Some of the rare autographed cards featuring Ayo are valued at more than $200. Meanwhile, base cards or even some non-auto parallels can go for well under $20. 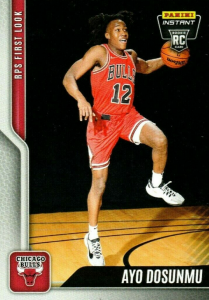 While Instant doesn’t have quite the appeal as Chronicles, it’s a great way to capture the excitement of draft night. As you can see in the card above, Instant is an immediate roll out of the soon to be NBA rookies in their new NBA uniforms. With the cards being the first to feature rookies in their new swag, there’s sure to be plenty of Bulls fans with one of these in their collections. Especially with the kid from Chicago coming home to play in his own backyard. 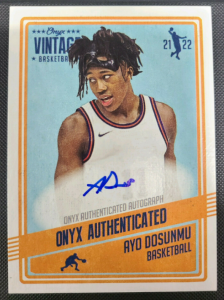 Onyx Authenticated isn’t a brand you see everyday but it offers some appealing Ayo Dosunmu rookie card options nonetheless. The autographed card shown above is valued at somewhere around $50 at the moment. Meanwhile, the regular base card is something you should be able to pick up for just a couple of bucks. A great options for casual collectors.

There’s quite a deal of risk here as Coby White will soon return from a shoulder injury. Something that could impact Ayo’s minutes. However, there has been speculation about the Bulls trading away White so you should monitor the situation closely. If a Coby White trade opens the door for Dosunmu, we like the chances for profits in the short term. However, if the move doesn’t happen it’ll be up to Ayo to show he should be the one to get the minutes. High risk, high reward.

The medium term approach eliminates some of the first year risk associated with the possible lack of minutes. If Ayo lives up to what he’s accomplished in college and the early pre-season, a door should open for a BIG impact second year impact in Chicago. Sky’s the limit if the home town kid seizes the opportunity once it arrives.