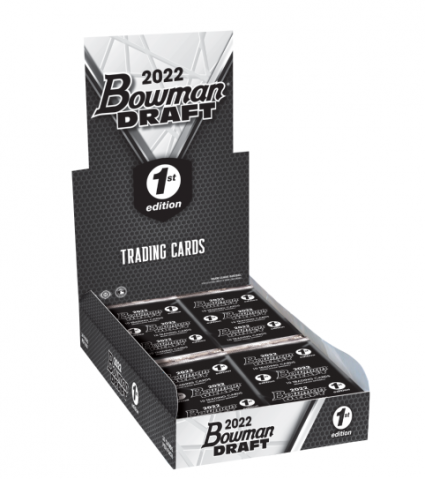 If you’re looking for the best baseball card packs to buy in 2023, you’re not alone. Not in the least bit. While the regular season is the main course, the hot stove of the offseason may play just as big of a role in getting collectors into the hobby shops. Therefore pack-ripping fever is constantly sweeping the country regardless of the month. And with some of the biggest sets arriving just in time for 2023, baseball card enthusiasts everywhere are looking for that special pack card that just may hold the gem they’ve been looking for. Speaking of those big name collections, let’s see what’s out there!

Get FREE Cards with Bargain Breaks 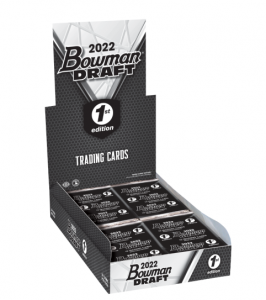 Make no mistake, these are THE packs you want to buy in 2023 if you’re hoping to pull an insanely valuable prospect card. Or any type of prospect card for that matter. As the name says Bowman Draft is loaded with players from the 2022 MLB Draft and will be flying off the shelves in 2023. Be on the lookout for prospect autographs and rare chrome varieties. 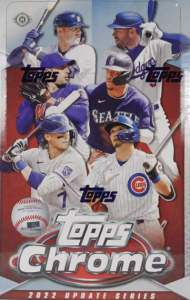 If you don’t want to go all out for a pack of Bowman Draft, take a look at the recently released Topps Chrome Update. While the quality is on par with Bowman Draft you won’t get as many cards in in a pack therefore you won’t be paying nearly as much. In addition to the pack structure difference there the collection sets itself apart from Bowman by focusing more on TRUE rookie cards rather than prospects. So if you want the RC logo in the corner this is where you should be looking. Without a doubt worthy of our Best Baseball Card Packs To Buy 2023 list. 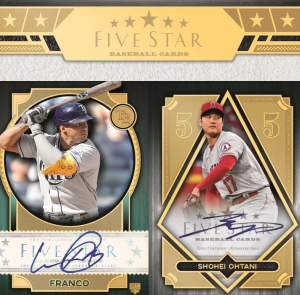 Now if you really want to blown some cash THIS is the set. Have you ever thought it would be nice if ALL the cards in a pack were autographed? Well 5 Star delivers on that lofty wish. However, with such an offering comes a similarly loft price tag. For instance, each pack contains ONLY TWO CARDS. And each box contains only one pack so if you want to tear a pack open you’ll be paying for a “hobby box” with an asking price of more than $200. Quick math will tell you that the price you pay for each card is over $100. But with the rare autos you can come across it could be well worth it.

Related Topic: Don’t forget about the Best Basketball card packs to buy in 2021!

When it comes to getting the jump on the game’s top prospects, the first place you need to look is Bowman Draft. In addition to being known for its collection of rising stars, Bowman Chrome has plenty of ongoing appeal due to its prestigious history. It has been around for over 20 years now with a debut in 2000. Even then the set was focused on players who had yet to make their MLB Debut. Good to see the tradition is alive and well!

Another card with some history on our Best Baseball Card Packs to Buy 2023 list is Topps Chrome Update. The storied history of Topps Chrome is unquestionable. Therefore we’re expecting the same great quality which has become standard for the brand. Released around the same time as the first Bowman Chrome collection, this baseball card debuted in 1996. A year that just so happens to hold what will end up being one of the most sought-after cards of the year: a Derek Jeter rookie card. Another rookie to look for in the first Topps Chrome set is the natural hitter Todd Helton. Oh, and another rookie card you may have heard of from the debut Topps Chrome year? How about this LEGENDARY Kobe Bryant rookie card!

Last but not least, Topps 5 Star made it’s debut in 20212 and has been churning out high valued cards ever since. At the time it was the epitome of luxury in the baseball card world. since then other sets have emerged with even bigger price tags but the trailer blazer of baseball card decadence still rings true. All killer and NO filler.

The first pick off the board in the 2022 Draft, Jackson Holiday had a hit and power skill set that should translate to a high average and plenty of long balls. In fact, the at the plate ability reminds us of another legendary baseball player you might have heard of. Matt Holiday. The name is no coincidence as Jackson is Matt’s son as you may have guessed. With a pedigree like that we like Jackson’s chances of being a bona-fide start when he arrives in the big leagues. 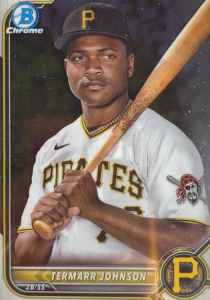 It’s not only about the best packs to buy in 2023 but also about the best PLAYERS. Termarr Johnson is certainly going to be one of them. Just like Holiday, Jones has a hit and power combo that should take him far in the MLB. A true MASHER that could very well wreak havoc on opposing teams for decades to come. Stash as many as you can! 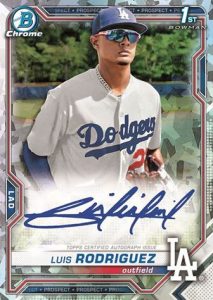 As previously mentioned, the 2021 Bowman Chrome is loaded with all the big-name future stars of the game. There is an extensive baseline of cards and plenty of parallel options as we mentioned earlier. However, what we did not mention earlier is all the sweet inserts such as  “40-Man Futures”, “Dawn of Glory”, and “Ascensions”. As the name suggests, these cards feature players that are poised to make their debuts in the big leagues sooner rather than later.

As far as buying options go we highly recommend the 2021 Bowman Baseball Mega Box. You’ll get two 5-card Chrome packs and an additional four 10-card Bowman Baseball packs all for somewhere around $50. On top of that, it’s the only buying option we have at the moment since Bowman Chrome isn’t due out until later this summer! 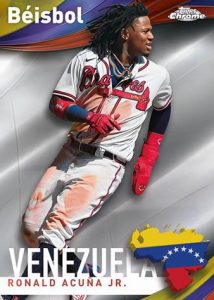 The standard pack has 4 cards only. Something we’ve become accustomed to with the flagship collections. If you’re not satisfied with only 4 cards, explore the idea of grabbing a full hobby box. Or better yet, the mega box that has FIVE cards in each pack and a total of 10 packs per box. You know what they say, the more lines in the water the bigger chance you have to catch the BIG kahuna. Actually, we just doubled checked and a kahuna is NOT a fish. Scratch that.

Just like Bowman, 2021 Topps Chrome will have many interesting inserts that feature future MLB star players. Hence the name “Future Stars”.  Additionally, the collection has a debuting insert theme entitled “Beisbol”.  This insert focuses on the great Latin American players in the game and featuring lively, almost jovial colors throughout. This can be seen in the Ronald Acuna Jr card featured above. In addition to the vibrant colors of Venezuela, there is also an outline of the country prominently displayed at the bottom right-hand side of the card. Again, this is a collection that features rookies so were excited to see which players will emerge as the breakout stars of this set. 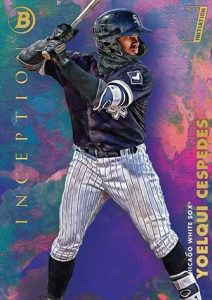 If a pack of 2021 Bowman Inception is what you’re after, you’ll need to grab an entire hobby box. Why? Because a hobby box is JUST ONE pack. However, each pack contains 7 cards and 2 of them are guaranteed to be autographed so the risk could end up paying off very nicely.

The newly relaunched Bowman Inception brand will feature some of the best prospects in baseball with cards that are made to seem like these guys are ready to conquer the baseball universe with just one swing. The cards are absolutely dripping with prestige as you can see by the premium foil stock. Additionally, in a truly artistic fashion many of the colors in each card match with the jerseys worn by the players. Safe to say the powerful imagery in each card will be hard to ignore.

Question of the day: Are you most excited about the best baseball card packs or the best football cards packs in 2021? 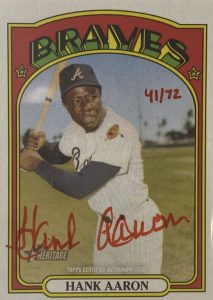 Topps Heritage is a collection we look forward to year in and year out. And while it isn’t on the level of our Top 3 from earlier, it certainly has its advantages. For starters, it arrives far sooner than the three on our list. The sooner the better we always say! Secondly, it’s far less expensive. For instance, a pack of these should cost you well under $10. In fact, you should be able to find those monster 20 card packs for under $10 as well.

Of course, price isn’t everything. Topps Heritage is a CAN’T-MISS in terms of style. Every year the brand harkens back to a bygone era of a baseball card collection and replicates one of the fan favorites from that time. By the way, Heritage also has some incredibly sought-after cards. Mike Trout and Hank Aaron are two of the most popular cards in the set and some go for more than $1,000. Not bad for a collection that many treat as an appetizer to the main course. 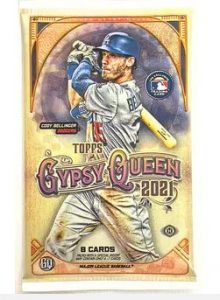 While it doesn’t quite make our Best Baseball Card Packs To Buy 2021 list, this one is certainly no slouch. Long live the queen! Gypsy Queen is back and as good as ever with a fresh lineup of all the best veterans and rookies that 2021 has to offer. Each hobby pack includes 8 cards so you’ll have a decent amount of chances for a big hit. Need more? The hobby box gives you plenty of chances for that huge score with 24 packs in each box for a total of 192 cards. All day long!

Even though Panini is not an officially license baseball card brand, this collection should not be left off the list. And the main reason for that? That incredibly rare KABOOM! insert you see above. While your chances of ripping one out of the pack isn’t great, there are BIG dollar signs in your future if you do. For instance, the Tatis Jr. shown here recently sold for more than $2,000. Pretty good considering it’s not even a rookie card!

Besides the inserts, you’ll have a chance at plenty of autographed cards from both current players and MLB legends. Like Bowman Inception, this is an incredibly limited collection so you’ll only get 2 packs per hobby box with 10 cards per pack. You’ll be paying between $200 and $300 per box but there are some very valuable cards here that could make the price more than worth it. Batter up!