Best Baseball Card Sets of the 90s on eBay 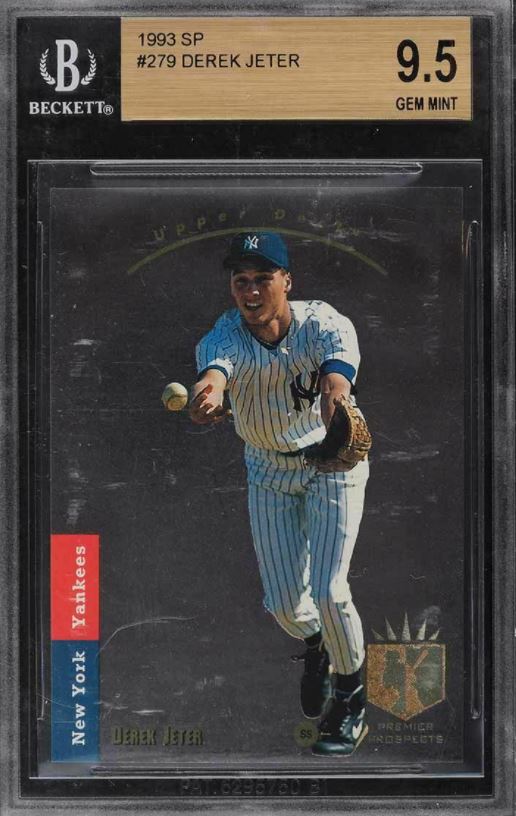 Now with the widespread popularity of the cards and their old age, it’s getting harder to find the best cards from this era in decent condition. At least straight out of the box.  And what’s even harder than that is narrowing down all of the great options to determine the Top 3 best baseball card sets of the 90s. Nevertheless, we’ll take our best shot! And as you may have guessed, it’s not really the sets themselves but the special cards within each that make them “the best”. So whether you’re a baseball card collector or simply a baseball fan in general, you should enjoy this trip down memory lane. Here we go! 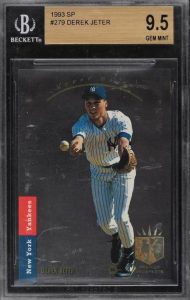 With our list going from oldest to most recent, we have the 1993 SP Foil at the top. And considering the card that can be found within its packs, it’d be listed that way if we sorted it in terms of “best goes first” as well. And that card? None other than Derek Jeter’s rookie card which has sold for upwards of $180,000. And as Jeter’s Hall of Fame induction ceremony gets close and closer, we’re only expecting that number to go higher. Heck, even cards that aren’t in mint condition are still bringing in some major jack.

In addition to this legendary Jetter rookie card, this set also includes a Chipper Jones card that can bring in close to $5,000 in the right condition (as in the PSA 10 Mint kind of condition). Other Noteworthy cards include Nolan Ryan, Ken Griffey Jr, and Johnny Damon.

As far as boxes go they certainly don’t come cheap! Expect to pay right around $6,000 at the moment for one that’s factory sealed. However, pull a couple of the cards we’ve talked about here and it could be VERY well worth it. 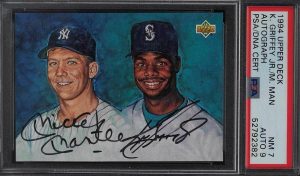 Now, this is set you may be more familiar with as it uses the Upper Deck name rather than the lesser-known SP Foil brand (which is still made by Upper Deck). The card that makes it so special is that legendary Mickey Mantle Ken Griffey Jr mash-up you see above. Whether you’re a fan of these guys are not, the card is a valuable collector’s item and needs to be in the collection of anyone who is a true fan of the era. While not as expensive as Derek Jeter’s card above, it still approaches 5 digits in the right condition. Each of those 5 digits are a great reason that this can be considered one of the best baseball card sets of the 90s.

Another great card here is the A-Rod rookie card. For whatever reason the price has not seemed to change within recent years, but if A-Rod makes it to the hall of fame one day you can certainly expect the price to increase. We for one think one of the best hitters the game has ever known has gone WAY overlooked in recent years. By the way, boxes are a SQUEAL of a deal when compared to the 1993 SP Foils. Got $300-$400? Grab one! 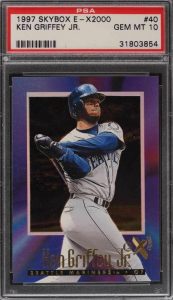 Last but not least we have the most recent set on the list. While Skybox had a good run, it’s a name you’re not gonna see around anymore. So sad! Some say this adds to the overall appeal of the set, but that can go either way as many collectors prefer the tried and true collections that can still be purchased in today’s market. At any rate, the reason this one makes our Best Baseball Card Sets of the 90s list is due to its overall collection of valuable cards. Unlike the last two which feature a few “show stoppers” and a bunch of other cards worth less than nothing, 1997 Skybox comes with it all kinds of cards that are still worth more than $100.

While the most valuable cards from this set don’t come close to matching the other two on the list, it still offers some pretty expensive pieces such as the Ken Griffey Jr. shown above. Other names to be on the lookout for include Jeter, Deon Sanders, Frank Thomas, and A-Rod. Heck, even Paul Molitor can bring in over $100.

When comparing the best sets to be released from these two decades, the first thing you’ll notice is the values. For instance, It’s easy to see that the most valuable cards from the 1990s far outweigh that of the 80s. Even the most valuable from the 80s are just a fraction of that Jeter rookie we talked about earlier!

While the 1990s may be more valuable, it’s doesn’t come close to stacking up to the iconic style of some of those sets that can out in the 80s. For example, is anyone going to argue that the boring ole’ looks of the 1991 Upper Deck set can even be mentioned in the same sentence as the 1986 Topps style that still turns heads to this day? Or what about the ho-hum looks of the 1996 Bowman set vs that iconic 1989 Donruss? Enough said.

Regardless of how you feel about the era, the 1990s offers some incredible cards. Ones that will be relevant for a very long time to come. And if you’re buying individual cards from these sets that’s exactly what you’re looking for. However, if you’re planning on buying a couple of boxes to see if you get that BIG HIT try to play it smart and don’t get in over your head. We’ve been down that road of chasing dud boxes and take it for us, it’s not a pretty sight. Set a budget aside and stick to it. Hit one of those Jeter’s and you’ll be able to increase that budget exponentially!

Don’t Forget To Check Out Our Other “Best Of” Lists!

3 Best Kirill Kaprizov Rookie Cards To Own In 2023