While next season is still far away, it’s never too early to start getting an idea of what the best baseball cards to collect in 2021 will be. Just like in 2020, we’re sure to see plenty of great cards released from the industry’s top sets. However, one set we’re particularly excited about is the 70th Anniversary Special Editon 2021 Topps Series 1 set. Something that is obviously reflected in our Best Baseball Cards to Collect 2021 list below.

While the 2021 Topps Series 1 is the only set we have much information on, it’s a certainty that tried and true sets like Bowman Chrome, Topps Chrome, Panini Prizm, and Donruss Optics will be making a huge impact again in 2021. Therefore, we’ll focus on cards you can expect from some of the most talented young players in the league. And Mike Trout. Sorry Mike you’re a spring chicken no longer.

Mike Trout will be entering his second decade as the game’s dominant force. While Trout has experienced many individual accolades, he’s still searching for a meaningful run in the playoffs. That said, Trout has shown no signs of slowing down. This leads us to believe that at some point we’ll see the perennial MVP contender shine on the big stage. Or at least be given the opportunity to do so for crying out loud. Here are some cards that would be worth owning if he turns the playoff corner next year! 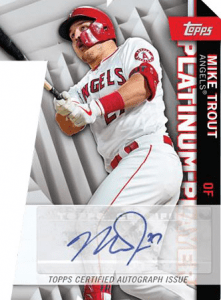 This card will feature a full-body photograph of Trout on the front in full swing. While the design isn’t really our bag, the autograph makes for a nice edition. Plus the print run of just 10 will make it a rare find indeed. The card is a popular insert on a yearly basis and we expect that trend to continue in 2021.

This is a parallel of the base Topps Series 1 Special Anniversary set. The Gold parallel has a print run of just under 2,000 making it rare enough to hold a little value but common enough to be accessible for most collectors. There are also less common parallels ranging from print runs of 1 to 99.

At just 22 years-old Acuna will be entering his 4th season in the MLB. Acuna, who signed an 8-year $100 million contract in 2019, has the potential to be a once in a generation talent (similar to the man above). The powerful left fielder has already helped the Braves to 3 consecutive division titles and fell just short of a World Series appearance in 2020. If he takes the next step in 2021, Acuna’s trading card value could go through the roof. 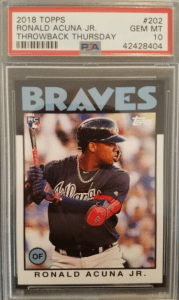 This set of inserts is extremely exciting. To celebrate the 70th Anniversary it features current players on the legendary 1986 Topps layout, which is the GOAT in our humble opinion. Acuna Jr. is confirmed to be featured in this set, so keep an eye out for the on-card autograph parallel! The card shown above is from the 2018 set but should give you a good idea of what to expect.

The 2021 Bowman collection will feature a sleek design that includes different colored borders for each parallel and a shaded effect throughout the cards. The Gold parallel has a print run of 50 so should end up somewhere in the area of a mid-range investment. In addition to the Gold, there will be more common parallels of Acuna that should put less of a dent in your bankroll.

Another youngster with extreme potential, Tatis Jr. goes into his 3rd season with the San Diego Padres. The eventual value of his 2021 cards will depend heavily on whether he can shake off last year’s late-season slump and return to form. And given his track record, we don’t see that being a problem. So if you happen to come across any of the cards below you may want to consider holding onto them for a while. 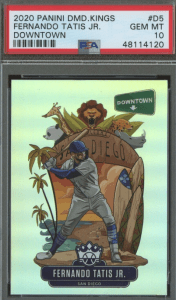 Panini Prizm is always a top set and this year will be no different. With no information officially released yet, it is hard to say for certain what the most popular cards will be. However, Panini is pretty consistent when it comes to releasing an exciting array of cards. We’re hoping to see another Fernando Tatis Jr. Diamond Kings “Downtown” insert like the one shown above. Stay tuned!

Sticking with the Panini family of cards, this set should feature plenty of Fernado Tatis Jr. options in the middle range value. At least that’s what we expect based on the 2020 set’s performance. Just like with the 2020 set, be on the lookout for a wide array of Prizm and refractor options.

Although still young, Soto is now established as hands down one of the best players in baseball. He already has a World Series under his belt (winning the Babe Ruth award in the process) and last year won the batting title by hitting an impressive .351.

At the age of just 21, Soto’s path to stardom is already complete so you can bank on him being a huge fixture in the league for years to come. Here are a couple of his upcoming cards we’re looking forward to.

While we haven’t seen an official list, it seems likely a player of Soto’s status has to be included. These cards will feature a cap patch worn in spring training and can also have an on-card autograph depending on the player. The autograph parallels will only have a print run of 10 so if Soto pops out of your freshly opened pack, expect dollar signs. 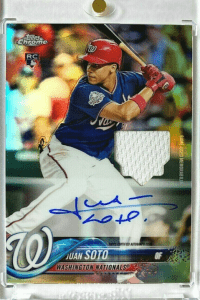 It’s a set that performed incredibly well last year and included many Juan Soto options with values in the $500 range. Above we see the Auto Jersey parallel, which became a favorite among collectors. We see no reason to expect anything less in 2021.

At the age of just 23, Alvarez remarkably raises the average age of the players found on the list so far. Which is a huge testament to the great young talent currently present in the MLB. Despite being slightly older than many of today’s new stars, Alvarez has only played one full season, that being his rookie year in 2019 for which he was awarded the AL Rookie of the Year. While last season was disrupted by injury, look for a resounding bounce-back season from one of the best bats from 2019. 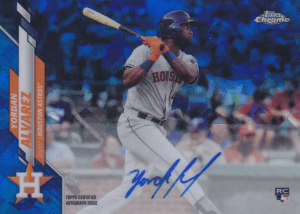 Although usually a staple amongst collectors, the Bowman and Topps Chrome sets are a bit overshadowed on this list by the uber-hyped Topps Series 1 70th Anniversary cards. However, both are sure to wildly popular as always. Not too mention wildly valuable.

While these sets may make some of the most valuable football cards, Topps and Bowman run the show in baseball. Which means, these are both great sets to dive into if you’re looking for a mid to low range purchase. Look for plenty of parallels and refractors and keep your fingers crossed for some cool throwbacks while you’re at it!

Question of the day: Who on this list will have the best season in 2021? It’ll certainly be close, but we have a feeling Juan Soto will rise above the steep competition!

Next year’s best cards will surely differ from those that reigned supreme in 2020. While Topps Chrome and Bowman Chrome dominated the current year’s list, we expect to see the 70th Anniversary Topps Series 1 set give these two a run for their money (and for yours!).

All 5 players on this list had cards last year that sold for incredibly very high amounts, with Mike Trout unsurprisingly topping them all. Looking forward to 2021, we expect the value of non-rookie cards from the youngsters on this list to trend higher as they continue to set the league on fire. So buckle up for the ride because it should be a fun one.

Now we come to the most exciting part of the 2021 best baseball card round-up. The TRUE rookie cards to be released! While many of the following players have already made their debut as Bowman Chrome prospects, there will be big value in the cards made for their first season in the bigs. Hence the TRUE rookie card tag. Let’s see who should be making an impact!

He’s the best pitching prospect in baseball and should make his inevitable debut in 2021. Meaning there will be a rush to scoop up his releases once they start surfacing. He has the stuff scouts dream of and that electrifying arsenal of pitches should be on full display at some point next season. Consider a 2021 Mackenzie Gore box break from a high-end set like Bowman Chrome. If you landing a few of his first true rookie cards you should have no problem “winning” the box break.

There’s no shortage of scouts who consider Kelenic to be the best bat in the minors. And many of those same guys expect that bat to be in the majors next season. The question is how will Kelenic stand up to major league pitching? As we said in our Jarred Kelenic rookie card (prospect) review, we don’t see him having much trouble with the adjustment. He’s already got a 2018 Bowman Chrome Draft card that’s generating plenty of cash at auction. Expect the same from his true rookie cards once they arrive.

Say hello to the game’s top prospect. However, as we said in our Wander Franco rookie card guide, we’re a little weary of Franco living up to the extraordinary hype he’s created for himself. Lots of pressure to say the least. His 2019 Bowman Chrome is already selling for more than $10,000 if it’s the right grade and parallel. So if you missed your chance to buy the 2019 Chrome at a reasonable price target his true rookie card options. Regardless of whether he pans out or not, the cards will hold tremendous value and should be a great sell-high opportunity at some point.

Baseball American recently called Rutschman the best prospect since Bryce Harper. We’ll defer to their superior judgment and hesitantly take their word for it. While those expectations may seem lofty, there will certainly be a market for his first season cards. Picking one up early and selling before he makes his debut might be a good angle.

Once considered only second to Franco as far as positions players go, Alex had a so-so 2019 on the farm causing him to slip in the prospect rankings. However, Kirilloff’s set back should provide a nice opening to buy some of his first season cards on the cheap. He’s a pure hitter who has plenty of power. Don’t let that injury-riddled 2019 fool you, he should be back to form and swinging a hot bat in front of MLB crowds before you know it.