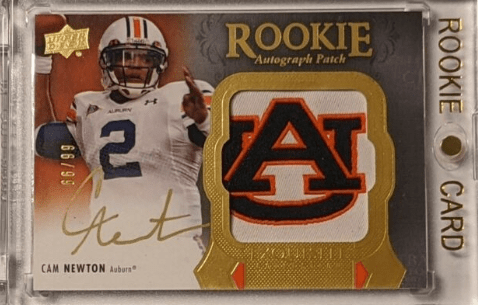 We just told you how a 2020 NFL MVP run could impact the value of Deshaun Watson rookie cards.  So while on the topic, let’s shift gears to another 2020 MVP contender and take a look at some Cam Newton rookie card options.  But before we do so, we’ll go over a few reasons why Cam could very well be hoisting the NFL MVP trophy at the end of the season.

And what a change it is.  Cam Newton just went from a team that finished fourth in the NFC South, to a perennial Super Bowl contender.  And you know what else is included in the move?  Bill Belichick.  The same Bill Belichick who lifted Tom Brady out of obscurity and turned him into a 6 time Super Bowl Champion (some would argue that Tom Brady did the same for Bill, but that’s subject to tackle another day).  We have a feeling Belichick will know how to get the most out of Cam.

Look, when Cam’s healthy, he’s always in the MVP convo.  At least at the beginning of the season.  And by all reports, it appears Cam Newton is ready to roll for the 2020 season.  With confidence it appears.  Would Cam agree to an incentive-laden contract with only $550,000 of guaranteed money if he didn’t think he could produce?

You may have forgotten, but Cam has already shown he has what it takes to win an NFL MVP.  Cam won the award in 2015 after going 15-1 in the regular season and producing 45 total touchdowns (35 through the air and 10 on the ground).  He also won Rookie of the Year in 2011 and led the Panthers to a Super Bowl appearance.  Combine this experience with that of Bill Belichick and we could see the magic happen all over again.

Now to be clear, an investment in a Cam Newton rookie card by no means DEPENDS on an MVP run.  But it certainly doesn’t hurt anything either.  That said, it’s time to see what’s out there! 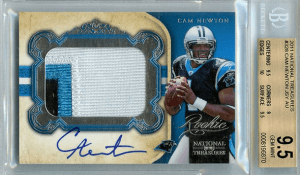 This is the “it” card when it comes to Cam Newton rookie cards.  The card features a horizontal layout with Cam off to the right side, ball in hand, and ready to wreak havoc.  It also comes with a patch of uniform material.  Did we mention an autograph from the Rookie of the Year can be found at the bottom?  Enough said. 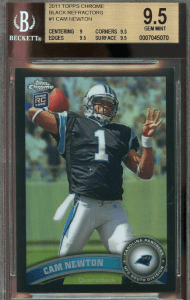 A classic Cam Newton rookie card showing the young QB launching the pigskin.  It’s available with or without an autograph and comes in a variety of refractor styles.  If you’re looking to splurge get a mint grade auto-refractor! 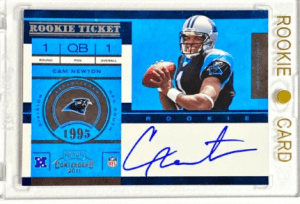 No NFL rookie card review would be complete without the classic Panini Contenders “Rookie Ticket”.  This one is another horizontal layout that shows Cam with both hands on the ball looking downfield (perhaps deciding whether to throw or tuck and run).  One of the most popular Cam Newton rookie cards on the market. 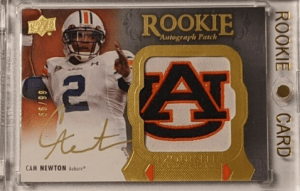 This one would be a nice little addition to any Cam Newton rookie card collection.  It features a Cam Newton from his old Auburn days and comes with a patch from the Tositio’s National Championship game.  Did we mention you can get it with an autograph?

Unlike some veteran QBs, there’s still a lot up in the air for Cam Newton.  For instance, will he ever win a Super Bowl?  Will he end up being inducted into the NFL Hall of Fame?  And, as we talked about earlier, does he have what it takes to win another MVP?  Obviously, if any of these outcomes come to fruition, you’ll see a nice jump in the Cam Newton rookie card market.  But, even if they don’t, Cam Newton has impacted the game in such a way that a long term investment in one of his rookie cards seems to make sense regardless.

And if you are looking to make a short term play, there are plenty of worse ideas than betting on an MVP quarterback and Bill Belichick.  Cheers!