If you’re on the hunt for the best Derek Jeter rookie cards to buy in 2021, you’re one of many. He is about to have one heck of Hall of Fame induction ceremony after all. And while there have been many legendary figures in the game of baseball, none have had as many first-ballot Hall of Fame votes other than the iconic closer Mariano Rivera. Hence the reason there will be no shortage of excitement, and perhaps even a little downright hysteria, come September when the ceremony takes place. As we approach that date, expect plenty of attention to go directly towards the Derek Jeter rookie card market. But before we go over the best Derek Jeter rookie cards to buy in 2021, let’s take a glance at Jeter’s remarkable career.

The Legend of Derek Jeter

During the dynasty that dominated the late ’90s, the Yankees were led by the Core Four. Those four men included the likes of stars like Jorge Posada, Mariano Rivera, and Andy Pettitte.  However, the most powerful and impactful member of the Core Four was none other than Derek Jeter. Jeter’s leadership and steady as a rock on-field performance helped the Yankees win it all in 1998, 1999, and 2000.

In addition to the championships and defensive dominance, Jeter also got it done with the bat. During the “The Captain’s” 20-year career, Jeter would notch a grand total of 3,465 hits to go along with a career batting average was .310. Jeter also won the AL Rookie of the Year Award and made the All-Star teams a whopping 14 times! And let’s not forget those 5 Silver Slugger awards and 5 Gold Gloves.

And if the championships and amazing play weren’t enough, Derek Jeter also had quite the flair for the dramatics. His 3,000th hit was a home run that went over 400 feet and the game-winning home run in the World Series against the Diamondbacks on Nov 1st, 2000 cemented began Jeter’s legend as Mr. November. And who could possibly forget one of the most famous plays of all time where Jeter caught future teammate Jason Giambi at home plate in the 2001 ALDS?? It’s all of these reasons and more that everyday there are people from all walks of life search for the best Derek Jeter rookie cards. Let’s find out what they are!

Related Content: Most Valuable Baseball Cards of the 80s and 90s 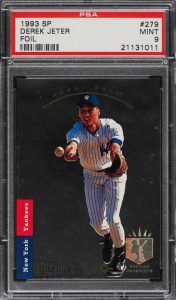 To top the list we have not only Jeter’s most iconic card but one of the most iconic rookie cards of all time. The 1993 Sp has vintage written all over it. It shows a skinnier and more youthful Derek Jeter in the process of flipping the ball to initiate what we can only assume to be a flawlessly executed double play. To add to the vintage look, the old Upper Deck Logo is promptly featured at the top of the card and a semi-circle pattern above Jeters’ Yankee cap.

When it comes to value, a PSA 10 grade is somewhere around the half MILLION dollar mark. Yes, as in $500,000. However, there is only 21 total in that kind of condition so prices begin to fall fairly drastically after that. Even so, PSA 9 grades and BGS 9.5 grades are still worth somewhere around $20,000. We’d expect those prices to go quite a bit higher come induction ceremony time in early September 2021. 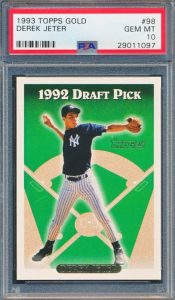 This is a beautiful card that should make any true Yankee fan feel a bit nostalgic. Just like the previous card, Jeter is a skinnier and leaner version of himself and is in the middle of making a great play. Color-wise, the white exterior of the card matches the white striped pants and logo on Jeter’s jersey nicely. Both the color scheme and action shot of the card are fortified by a prestigious-looking Topps Gold logo located off to the right of the card. Additionally, the name “Derek Jeter” can be seen on the bottom with a gold-plated design.

As far as prices, these are far more affordable than the card above. PSA 10s sell for somewhere around $5,000 right now while cards graded PSA 7 or lower are available for less than $1,000. 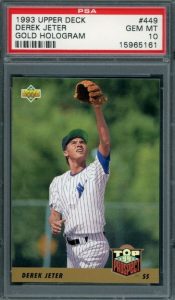 This card features Derek Jeter in the middle of catching a pop-fly with the Upper Deck logo placed prominently in the top left corner. When it comes to the background, you can tell that Jeter hasn’t yet started playing home games at Yankee Stadium. There appears to be a chain-link fence being used as the outfield wall in front of a row of trees. With the fence, trees, and “Top Prospect” mark on the bottom right-hand side of the card, you can tell from a mile away this is a “prospect card”.

Trending Topic: Check out the most valuable baseball cards of the 2000s!

In the short term, the biggest impact on prices is all but guaranteed to be that induction ceremony we keep talking about. While it’s never a certainty, one would have to imagine that the joyous occasion will send Derek Jeter’s best rookie card prices on a steep upward trajectory. And if that doesn’t get prices up high enough for you there is always the much-anticipated “The Captain” documentary airing on ESPN in 2022. Watch the market closely and if you like what you see go ahead and take some quick and easy profits come September. 9/10

After the ceremony, there doesn’t appear to be anything that will move the market other than the overall increase of the market as a whole. Sure there may be some random spikes but at the end of the day, we’d go with either a short-term or long-term approach. 7/10

This is what we’re most comfortable with. Jeter is a true legend of the game whose impact is going to be remembered for a LONG time. Stash one away for 20 plus years and you should be in for a VERY nice surprise.

Don’t forget to scope our other “Best Of” Lists!