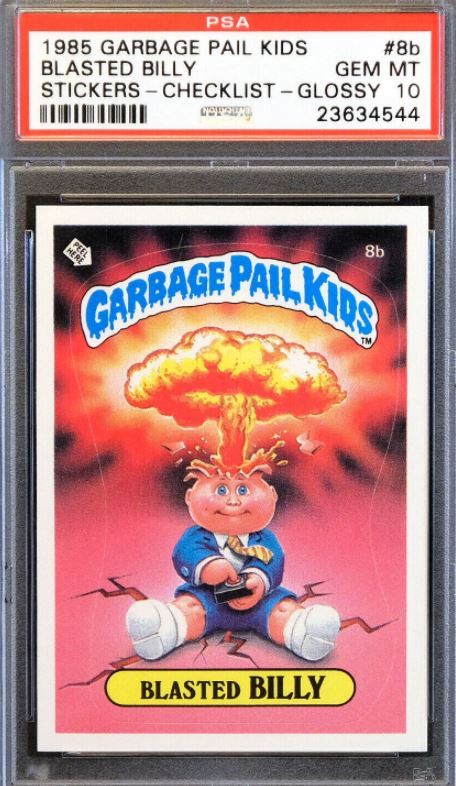 Most collectors don’t wake up in the morning and ask themselves “Gee, I wonder what the best Garbage Pail Kids cards to buy right now?”. However, if you’re are a frequent buyer of sports cards and are looking to expand your collection, such a query may not be a bad idea. Sure, they may seem silly at first, but let’s face it, Garbage Pail Kids Cards have become classic collector items that have been around for decades and will be around for many more. In fact, some will argue they are only going to become more and more popular over time. Not to mention more valuable. Therefore, we will be covering our top picks in our 5 Best Garbage Pail Kids Cards to Buy Right Now list. Let’s GO!

While there are plenty of remakes and altogether new GBK cards being made by Topps, they “pail” in comparison to the classics. Therefore, none of the best Garbage Pail Kids cards to collect are ones that were made in recent years. This may come as no surprise to most of you, but thought we’d go ahead and clarify! 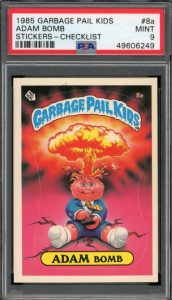 This wacky little guy definitely can’t be trusted when left to his own “devices”. A classic Garbage Pail Kids Card that shows Adam sitting on the ground with his menacing remote control wearing a smile from ear to ear. How about a little supervision??

At any rate, the card is an all-time great and the value shows it with high-grade cards exceeding $3,000. And if you really wanna get nuts, you can spend up to $30,000 for a high-grade glossy version! Of course, you can always pick up a lesser grade or ungraded card for a few hundred bucks if you’re not looking to break the bank. 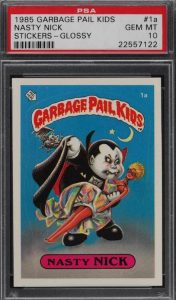 This blood-thirsty little vampire is always looking for his next meal as you can see in the photo above. Poor Barbie. Like the iconic card above, this one is a true classic that sells for similar prices so be prepared to open that wallet if you’re looking for something with a high grade. Hey, it’s worth it for something that has the potential to stand the test of time like these! 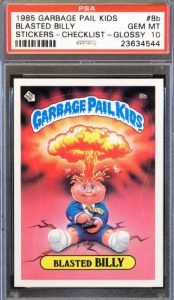 The third card on our list is actually a “checklist” card featuring Adam’s deranged twin brother Billy. In fact, the photo on the card is the same as the Adam’s with the only difference being the name at the bottom. Either way, this one is much more collectible than some of the other regular cards in the collection and the value shows it. For instance, a glossy version graded PSA 10 recently sold for over $6,000. Not bad for a checklist! Checklist, our not this has got to be our favorite on the Best Garbage Pail Kids Cards to Buy Right Now list. 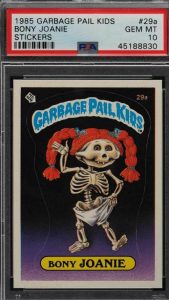 As you can tell ole’ Bony could probably use a few extra pounds to go along with that flowing red hair. If you’re tired of all the bros and are looking for a female character to add to your collection, this is a perfect investment. Additionally, you won’t have to pay nearly as much as some of the previous cards on the list. For example, the PSA 10 featured above recently sold for under $1,000 on eBay. We could easily see that price changing if Bony eventually starts getting the attention from collectors that she so rightfully deserves! 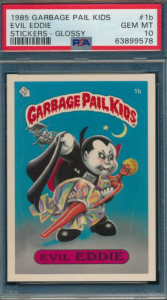 Not to be confused with the sinister Nasty Nick, Evil Eddie is quite capable of pulling off the same intoxicating moves on the dance floor. Likewise, Eddie is also capable of pulling off some BIG TIME sale prices. Recently a PSA 10 version of the card shown here sold for north of $6,000. Safe to say Eddie is a true heavy hitter. Both on the dance floor and on the trading card market. If you’re looking for the highest values seek out the glossy version like the one shown here. Meanwhile, the regular texture is something you should be able to pick up for quite a bit less. But make no mistake, any mint condition card featuring this little bugger is going to generate some very nice values.

Hot Collector’s Item Alert: Check our list of the 10 most valuable YuGiOh cards! 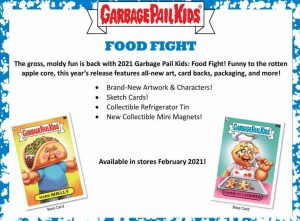 Now, this is a complete case full of cards which is something you’ll want to consider if you’re hoping to score some of those rare parallels such as Saucy Red, Spit In your food Blue (gross), or Fool’s Gold. Sure, it may take a lot of work to open all those packs but you’re sure to get high-value cards this way. The full set contains about two hundred cards, so we figure you’ll be putting a big dent in your Garbage Pail Kids Food Fight checklist after going through an entire case. And that includes the rare parallels.

As far as the details go, cases come with 8 boxes with 24 packs per box and 8 cards per pack. Expect to find one big hit per box on average! 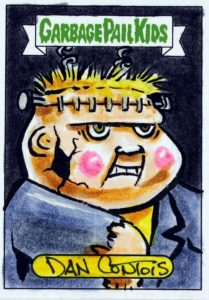 As the name implies, these cards are truly artistic as they are simply the artists’ sketches of ideas that they had for the cards. While they may not have the same appeal as the original to some collectors, these cards are still one of a kind. What also adds to the collectibility is that each card is signed at the bottom by the artist that originally drew it. So not only do you have a stylish card, but you also get that always appreciated autograph. As far as value goes many of these sell for less than $500.

As you can see, the 2015 spoof card shown above features a basketball stud that so happens to be named Jordan. He is also wearing a red jersey as not so coincidentally is donning the number 23. We can only wonder what living legend this card is spoofing on! At any rate, this comes from the 30-year anniversary collection of the 1985 set featured above. This is one of the top Garbage Pail Kids cards in the world and the values show it. Look to pay somewhere around $800 if you want a PSA 10 in your collection.

Go Long! As we said, the 3 original GPK cards we’ve listed aren’t going anywhere. Period. Sure they hold a special place in the hearts of 80s kids everywhere but as you can see by their continued popularity, a new generation is beginning to appreciate the madness as well. Sure there will be ups and downs like in every market, but long term we’d expect the value of these 3 cards to be far higher than they are today.

Don’t forget to check out our other “Best Of” lists!