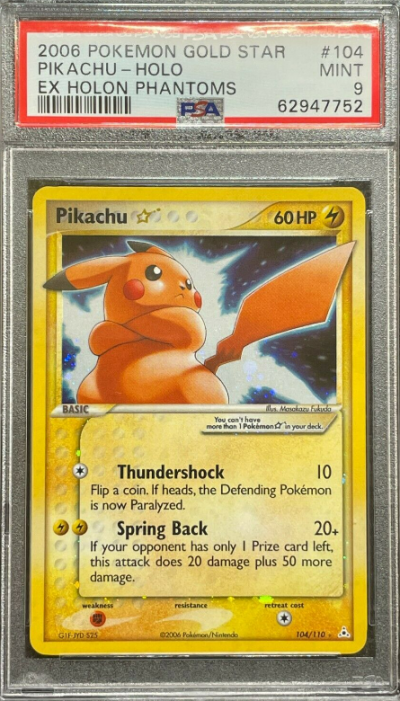 Whether you’re a fan of Pokemon or not, one thing’s for certain. These little critters are capable of hauling in truck loads of cold hard cash. Or perhaps a hefty electronic payment is the more likely scenario. Either way, it’s no secret that Pokemon has exploded in popularity within the collecting world over the past decade. Thus forming an extremely lucrative alternative investment market.  That’s why were about to take at peak at our 5 Best Gold Star Pokemon Cards To buy Right Now list.

While there is no shortage of options, we’ve narrowed it down to 5 cards from a variety of price ranges. Hey, every collector has different goals! At any rate, we LOVE where the following 5 cards are heading so buckle up and let’s get the party started. 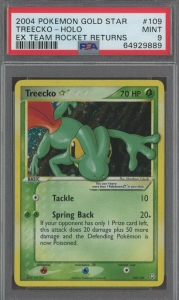 Simply put, there are no shortages of valuable cards in this collection. Above you’ll see Treecko, a slimy little creature with 70 HP and the ability to deal out 70 damage when your opponent is down to 1 prize card. Not to mention he inflicts poison in this situation. Safe to say we have no desire to run into Treecko in a dark alley. Not today, not ANY day.

In addition to the card above, there are other high end cards in the 2004 Ex Team Rocket Returns collection such as Mudkip and Torchic. So if you’re looking to invest not hundreds but THOUSANDS, this is a great set to hone in one. Without a doubt one of the 5 best Pokemon Gold Star cards to buy right now. 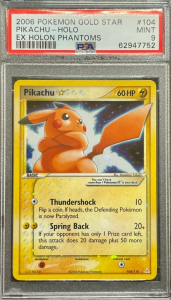 If you thought we’d leave out a collection that features ole’ Pikachu himself, think again. Anyone care to dance with fate? Well Pikachu certainly does! Flip a coin and if it turns up heads, the defender is in BIG trouble. Like in a paralyzed sort of way. Who knew the cute little bugger could be so ruthless?

In addition to the Chu-Meister, there is a very valuable Mewtwo card lurking in the set. Either way, this is a great collection if you have the urge to sink a thousand bucks or two into your portfolio. 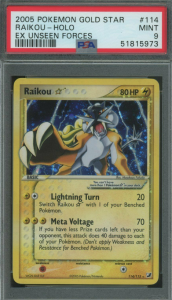 Moving on to a more affordable collection we arrive at 2005 Ex Unseen Forces. The card above features Raiku. A vicious cat with a chip on his shoulder. The wily old feline can sub in for a benched Pokemon and can help you out in a pinch when you happen to have less prize cards than your opponent.

As far as values go, these aren’t the most valuable out there. However, this set is great for anyone looking to spend less than $1,000. While they typical don’t hold the hefty values as the cards we covered above, Raikou and the gang are coveted collector items nonetheless. And will remain so into the future. A no-brainer for our 5 Best Gold Star Pokemon Cards To buy Right Now list. 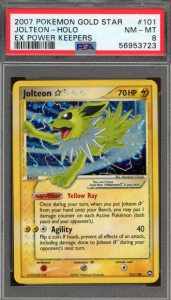 In addition to Unseen Forces, the 2007 Ex Power Keepers makes for a great moderate investment. Holding a similar value to the card above, Jolteon certainly knows how to pack a punch. An unimposing dog-like fellow that like Pikachu, isn’t afraid to tango with fate. If a coin flip turns up heads you’ll find yourself invulnerable to all effects of your opponents next attack. Not bad, not bad at all.

Who would have guessed that this grimy dude was capable of such a defense stunt? Not us. Anyways, perfect if you can only spend a few hundred smackeroos. 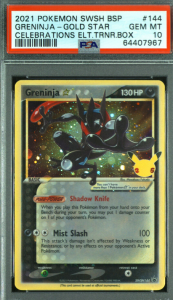 If you’re a casual investor who’s wants to pick up one of the best Gold Star Pokemon cards to hit the shelves in recent year, look no further. This set arrived in 2021 as a way to celebrate the history of Pokemon. Not only can you get many of these for a hundred bucks or less, you can get a PSA Grade 10 like the card above without hurting your bankroll.

Speaking of the card above, it features the infamous Greninja. A mysterious being who is no stranger to wreaking havoc. For instance, his Mist Slash attack isn’t effected by any preventative effects cast by your opponent. Talk about reliable!

While these aren’t as popular as the other on our list, it’s a great collection that pays homage to the rich tradition of Pokemon. Therefore, we have no choice but to include this guy on our Best Gold Star Pokemon Cards To Buy Right Now list.

Personally, we’re partial to the 2006 Ex Holon. Not only does it include Pikachu, but it also offers cards that you can really sink some cash into for a long term investment. All without completely breaking the bank. Not like the more valuable cards in the Ex Team Rocket Returns collection anyways.

Of course, the best set is always subject to the tastes of the person who’s ready to shell out the cash. For instance, there are plenty of fans who prefer cheaper Pokemon Gold Star collections like the 25th anniversary and Celebrations. Meanwhile, others are entranced by the sheer values found in the big boy sets of a bygone era. Either way, you can’t go wrong with Gold Star Pokemons.

What is the cheapest Gold Star Pokemon card?

While it’s hard to single out the CHEAPEST, we can tell you what the cheapest Gold Star Pokemon set is. That of course would be newer collections like the 2021 Pokemon Japanese 25th Anniversary and the 2021 Pokemon Celebrations set. How cheap are they? Let’s put it this way, you can find ungraded cards from these collection for less than a single bone. How’s that for a value play?

As far as the older cards go, the cheapest Gold Star Pokemon cards are always going to be in pretty poor condition. Which may not be a bad thing if you want a historic card for a fraction of the price of what you’d pay for one in mint condition!