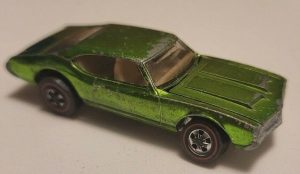 If you’re looking for the best Hot Wheels to collect, rest assured you’re not the only one. At some point in our lives, many of us have taken a Hot Wheels car for a spin. In fact, decades ago as a parent, you were surprised if your child didn’t want a Hot Wheels in their toy collection. And guess what? Those kids grow up to be adults. Some of whom end up having a passion for collecting. And one catasylst in the collecting world will always be nostalgia. So whether it’s baseball cards or toys, the appeal to reminiscence will always play a role in the industry. Let’s take a look at how the Hot Wheels brand rose to prominence!

Hot Wheels was introduced by Mattel in the late 1960s. The brand was originally made by a man named Elliott Handler who was set on making a toy car brand that could compete with the popular Matchbox brand. Once the first line of Hot Wheels cars now known as “The Original 16” was released, the world started to see Handler’s dreams come to fruition.

With the success of the first line, Hot Wheels would end up being a major disrupter to this budding industry. Other interesting car lines such as “Sizzlers” and “Flying Colors” would later emerge to further the momentum. In the early ’80s, Hot Wheels introduced new wheels called “Hot Ones” and more recently would begin releasing toys that would include collector numbers.

Like sports cards and coins, Hot Wheels have become coveted collector items for many enthusiasts. Therefore, it comes as no surprise that there can be tremendous value found in these little toy cars. Let’s take a look at some of the best Hot Wheels to collect on the planet. 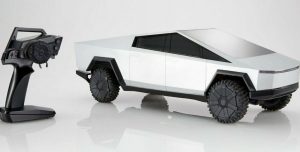 We lead with a Hot Wheels car that is all types of cool. As a matter of fact, the Tesla Cybertruck has the look of a space vehicle that turns into a flying car. If that’s not the epitome of cool, what is??   The truck has a striking silver color that throws off a real high-tech vibe. Additionally, the Tesla Cyber Truck comes with a 4-wheel Cyberquad that resembles an ATV vehicle. These are incredibly hard to come by right now so count yourself lucky if you happen to find one for sale!

As the name suggests, this classic Hot Wheels car absolutely screams vintage. And with vintage often comes plenty of demand from collectors. So much so that cars like the “green machine” shown above recently sold for nearly $1,000. While that seems like big dollars, there are plenty out there that can bring in more dough than that. A tried and true collector’s piece that isn’t going anywhere anytime soon. 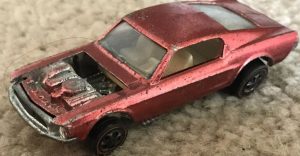 Fewer things look as cool as a classic Mustang. It’s the perfect miniature blend of sophistication and pedal to the metal power. The pink 1968 custom shown here clearly shows its age but that doesn’t stop it from commanding a $500 sales price.

How to tell which Hot Wheels are valuable?

For starters, the best way to figure out if your Hot Wheel is valuable or not is by checking to see if it is one of the Orginal 16  from 1968. If so, chances are you’ve got some decent value on your hands. But even if it’s not, there are other Hot Wheels besides the ole’ Red Line series that can be worth some dough.

While the value of an indivual Hot Wheel depends on many variables, the best thing you can do to get started is finding out EXACTLY what you’re working with. For cards made in 2008 or after, this can be done by checking for the base code. Simply glance at the bottom of the car and pick up the 3 digit code that starts with a letter followed by 2 numbers. The letter stands for the year the car was made with 2008 being an “A” and each year after taking the following letter. The numbers after the letter represent the week of the year the vehicle was manufactured. 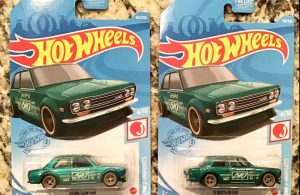 This 2021 exclusive is suyper rare and thus is priced that way. Whether you like its looks or not, this little ole’ Datsun is wanted by collectors everywhere at the moment. Hence the steep price tag. For example, the one shown above recently sold on eBay for more than $300.