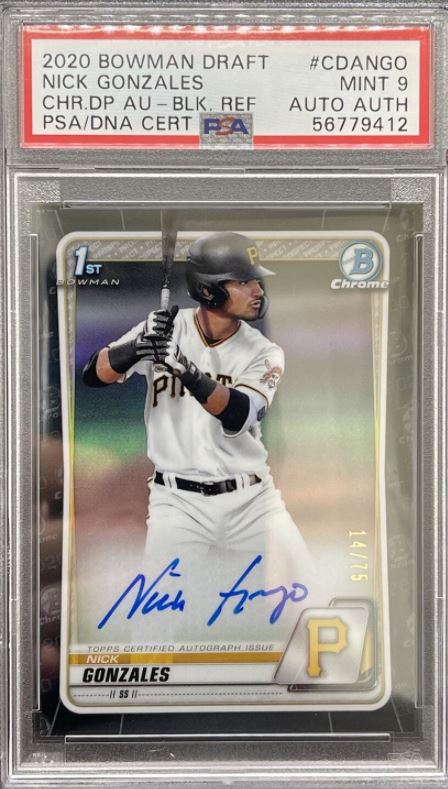 With such an intriguing prospect who is poised to reach the major league level way faster than most, a Nick Gonzales rookie card purchase is certainly something to consider. The ultra-talented hitter from New Mexico State can play second base, shortstop, and even a little center field for good measure. And speaking of New Mexico State, Gonzales had a very impressive college baseball career. For instance, he hit .347 with 9 home runs and 36 RBI in 2018 at only age 19. While that was a fine showing, 2019 was the season that served as the breakout year that helped draw the attention of MLB scouts. In that incredible offensive display of a season, Gonzales hit .432 with 16 home runs and a whopping 80 RBI.

Then in the shortened 2020 season, Nick Gonzales was set for otherwordly numbers before play was halted. To say the least. In only 16 games, Gonzales batted .448 and cranked 12 jacks with 36 RBI. Oh, and his slugging percentage sat at 1.115, a number some players could only dream of having for an OPS. His 5 home run day-night doubleheader against Purdue-Fort Wayne certainly helped played a role in those final tallies.

Of course, Nick Gonzales received many accolades for this incredible run. For instance, he was named a 2020 Collegiate Baseball Newspaper All-American and ultimately the 2020 Collegiate Baseball Newspaper National Player of the Year. While that was certainly a nice honor to receive, it wasn’t until the 2020 MLB draft where Gonzales saw the ultimate recognition of his hard work when the Pirates called his name just 7 picks into the event. Now he is thriving in A ball and all signs point to a fast ascension through the minors. Sounds like a good time to pick up a Nick Gonzales rookie card to us. Here a few we like!

Speaking of guys who dominated in college….

Consider picking up one of these Adley Rutschman rookie cards before he starts dominating the majors! 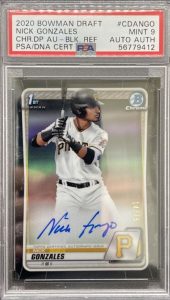 This card has a very simplistic layout which really helps bring the action shot showing Nick Gonzales poised in the box hoping to deliver something to match what he did on the college level. As with most Bowman Chrome cards, the Bowman logo is displayed prominently near the top of the card. The card above is a Black Refractor autograph with a print run of 75 and makes for a nice play if you’re looking to spend more than $500. Meanwhile, if you’re looking to spend more towards the $50 range we’d recommend something like the sparkle refractor non-auto. 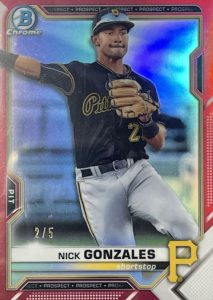 The 2021 version of the Nick Gonzales rookie card from Bowman Chrome makes it seem like the young infielder is teleporting to another dimension. With those foggy edges that hover around the middle of the card, we’re kind of worried about whether or not Gonzales will even be there after making the throw to first. At any rate, there are plenty of different refractor options with a variety of prices. However, these are quite a bit more affordable than the ones from the 2020 Chrome collection. If you’re in the mood for a cool insert the “Futurist” edition really seems to stand out from the rest. 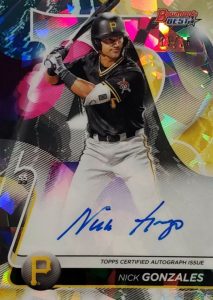 This one has a dark and stormy layout that can be seen throughout the card. Something that serves to blend in well with the black Pirates jersey worn by Gonzales. Not to mention the black bat and helmet. Anyways, the action shot features Gonzales waiting patiently to put the bat on the ball for an extra-base hit of some sort. Or at least that’s what we STRONGLY suspect was the result. Either way, this is a great collection for casual investors. For example, even autographed cards like the /25 Atomic Refractor shown above are available for less than $200.

As we mentioned early, Gonzales is having a fine 2021 so far. In his first 51 at-bats he’s slashing .294/.368/.549 with 2 home runs and 2 bags. Not too shabby. As the season progresses we’re expecting even more production along with some nice gains on those Nick Gonzales rookie cards we talked about. 8/10

It’ll be tempting to sell if you’re seeing some nice gains at the end of this season. And in many cases that will be the best thing to do. However, if you can afford to hold out longer there is plenty of reason to be optimistic about your investment over the next few years. An MLB call-up and an immediate impact should send these skyrocketing. Of course, you never know what you’re going to get out of a prospect once he faces big league arms. 7.5/10