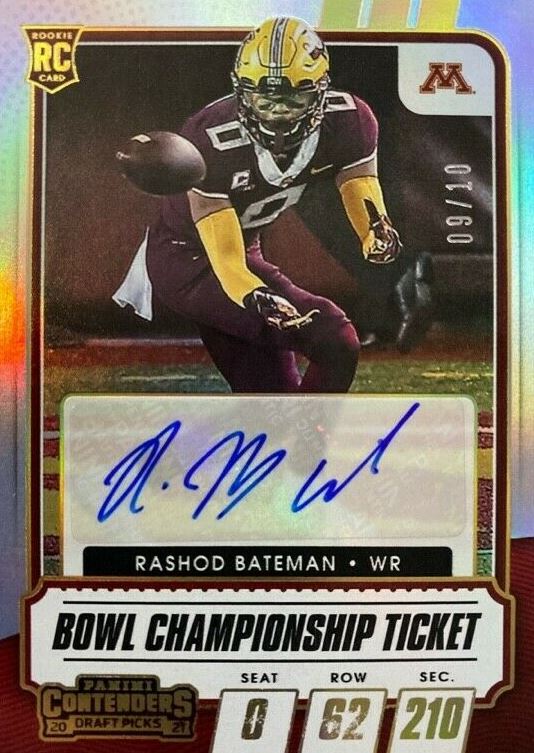 If you’re thinking a bounceback season is in the cards for Lamar Jackson and the Baltimore Ravens, a Rashod Bateman rookie card purchase is something to consider. The 1st round draft pick is currently on a mission to change the narrative when it comes to wide receivers that play for the Baltimore Ravens. And perhaps provide poor Lamar Jackson some relief while he’s at it!  Anyways, based on how his collegiate career went, you can’t help but think that Bateman is the perfect candidate to help turn things around in Baltimore. As you likely know, Rashod Bateman was a big play wide receiver for the University of Minnesota who QB Tanner Morgan relied upon when he needed to pick up some MAJOR yardage. Let’s take a closer look at why everyone seems to be high on this explosive new weapon that is soon to be a major cog in the Raven passing attack.

A Look at Bateman’s Breakout Season and Big Games

Rashod Bateman had a fairly decent freshman season catching 51 passes for 704 yards and 6 touchdowns. However, his breakout sophomore year is what really put the talented young receiver on everyone’s radar. That season Bateman caught 60 passes for 1,219 yards and 11 touchdowns with an average of 20.3 yards per reception. Talk about a yardage eater. In fact, during his entire college career, Bateman would average a whopping 16.3 yards per reception. Many of which came in the following big performances.

In a conference game against Purdue, Bateman would have 6 receptions for 177 yards and 2 touchdowns to help lead the Golden Gophers to a 38-31 victory.  A few weeks later, Bateman stood out in a much more important conference game against Penn State. Both teams were undefeated heading into the game and only one emerged with their perfect record intact. Minnesota. Thanks to Bateman’s 7 receptions for 203 yards and a touchdown. And let’s not forget about that junior year performance against the Illinois Fighting Illini where Bateman caught 10 passes for 139 yards and 1 touchdown to lead his team to a 41-14 blowout victory.

These are exactly the types of game Lamar Jackson will need from his new weapon if the Ravens are going to become a playoff team that is taken seriously. And after being drafted as the 27th overall pick in the 2021 NFL Draft, it’s fair to say the expectations are high. If Bateman lives up to those lofty expectations, you’ll be glad you picked up one of the following cards! 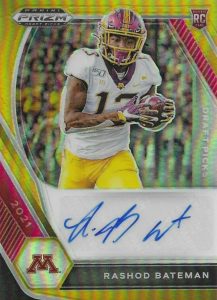 At first glance, you can immediately see the continuity in the color scheme of this card. Something Panini Prizm is known for. In the Gold Prizm autograph card shown above the gold really stands out and serves as a nice framework for that beautiful blue signature at the bottom. As far as the action shot goes, Bateman appears to be in the midst of picking up a massive chunk of yards as he breaks free towards the endzone. While the Gold Prizm shown here is one of the most valuable of the collection, it’s still very affordable at under $200. However, if your tastes are a little more expensive seek out one of the Color Blast inserts. Meanwhile, if you’re looking to find something more casual grab one of the non-auto Prizms. 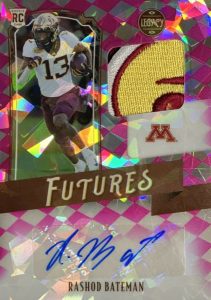 The prestige of this card can be seen over every millimeter of the beautiful “Futures” insert shown above. Game-worn material? Check. Glittering diamonds? Check. Autograph? Check. Hard to think of much more you could possibly want in a card! This one happens to be a rare /5 and makes for one of the most expensive Rashod Bateman rookie card options the collection has to offer. Less expensive options include the “Rookie” and “Under the Lights” inserts. Either way, prices pale in comparison to some of the other big-name rookies taken in the 2021 NFL Draft. Something Batemen’s play in 2021 can impact drastically. 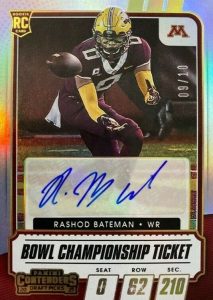 The Bowl Championship Ticket above is our favorite of the set. For starters, the prime-time colors of the background throughout the top and most of the bottom of the card match perfectly with the color of the home jersey worn by Rashod Bateman. Nothing like a night game to bring out the best! At any rate, Bateman is seen hauling in a low thrown pass and likely hoping he isn’t about to be lit up by a safety. Similar to the first card featured on this list, there are only 10 of these made and it includes Bateman’s autograph. The card is also similarly priced to the Prizm Draft card at around $150 ungraded. 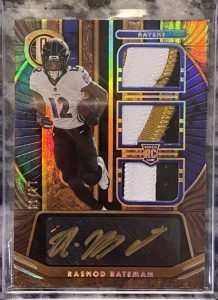 Now we turn to one of the most beautiful collections of cards released in 2021. Period. Regardless of the sport, value, or prestige (or any other factor you can think of) Panini Gold Standard is a set of cards that is hard to live up to. Just take a look at that Rashod Batment rookie card we’ve posted. A striking array of colors with undertones throughout of an element called……GOLD! Even the autograph is in gold for cryin’ out loud! Anyways, what we’re trying to say is that this card is going to turn some heads.

In addition to beauty, another thing the Panini Gold Standard collection has going for it is value. For instance, the card above has a print run of 49 compared to the Panini Contenders card above that has a print run of only 10. They both have autographs as well. But guess what? Values are similar. So if you’re looking for something a little more elite than the Contenders or Prizm collections, look to Gold Standard. You won’t be disappointed if Bateman breaks out in a BIG way.

Rookie of the Year Contender Alert!

If Lamar and the Ravens take the next step in the playoffs this year there’s a good chance Bateman will be part of the reason. While that is certainly a big IF, a Rashod Bateman rookie card purchase before the season begins should pay off nicely in this circumstance. Of course, a complete and utter flop of a season is always a possibility with a questionable passing game and run-first offense like Baltimore’s. However, at the end of the day, we can’t help but think Lamar will find a way to bounce back and get that passing attack going in 2021. 7/10

The best approach seems to be to take it a season at a time here. There are simply too many questions that need answering before you can feel confident enough to tie up your bankroll in anything more than a 1-year hold. However, if you like what you see at the end of the season, there certainly isn’t anything stopping you from holding onto your Rashod Bateman rookie cards for a shot at even greater profits in 2022. 4/10