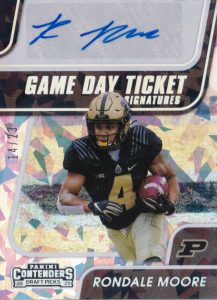 To say Rondale Moore turned some heads as a multi-versatile wide receiver for the University of Purdue is an understatement. But can he do the same once he gets started in the NFL? Well, if his rookie year in pro ball is anything like his first season in college, folks will have sore necks from turning their heads so much. As a freshman, Moore had a total of 2,215 yards from scrimmage and 14 touchdowns. Not to mention a whopping 114 receptions and 1,258 receiving yards. Add the 744 yards combined between kickoff and punt returns and you’ll fully understand what a threat this kid could be. And even though Moore’s 2019 and 2020 seasons were cut short by an injury and the pandemic, he had some BIG games in his career. So before we look at the top Rondale Moore rookie cards, let’s take a closer look at his big-time performances!

Moore had a spectacular showing in Purdue’s 49-20 upset of #2 Ohio State on October 20th, 2018. In what was obviously a big win for the program, Moore caught 12 passes for 170 yards and 2 touchdowns. A few weeks later, Rondale Moore sparked Purdue again by catching 12 passes for 141 yards and 2 touchdowns to lift his team to a 28-21 victory over Indiana. And while his best season overall came in 2018, Moore had his top single-game performance against Vanderbilt the following season. In a game Purdue would end up beating Vanderbilt 42-24, Moore went off for 13 receptions, 220 yards, and 1 touchdown. Impressive to say the least.

It’s games like these that made Rondale Moore a 2nd round draft pick by the Arizona Cardinals. He will certainly look to make his presence felt in a receiving corps that includes Pro-Bowler DeAndre Hopkins and AJ Green. Now let’s take a look at some of Moore’s first-ever football cards.

Question of the day: Will Rondale Moore or Elijah Moore go on to have the best rookie season? 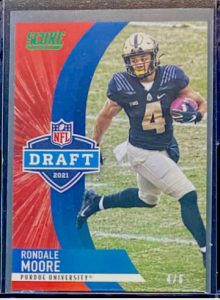 Take one look at this card and you’ll see the nostalgic Score logo prominently displayed on its upper left side. Therefore, if you’re a fan of sports card nostalgia you could do a lot worse than a modern-day release from this tried and true brand. In addition to the logo, most of this NFL Showcase insert card shown here contains the field of play with an enthusiastic Rondale Moore streaking for big yards. Most likely while returning a kickoff or a punt if you’re asking us! Just like back in its heyday, Score remains somewhat of a budget card so if you’re looking to “score” a bargain, look no further.

The color scheme of this Cracked Ice Game Day Ticket Rondale Moore rookie card blends perfectly with that of his Purdue uniform. But let’s face it, nobody is REALLY here for the aesthetics. What’s most important is the big blue autograph on the upper half of the card. That and the number running along the left-hand side that shows there were only 23 of these made. And the best news? You can still pick this card up for less than $100. Not bad considering it’s rare, signed, and from one of the best collections to take on this year’s crop of NFL rookie talent. 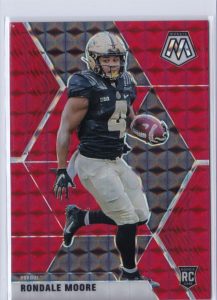 There are quite a few Prizm varieties of the 2021 Mosaic Draft base card. Here you see the stunning Red Prizm. Sharp as it looks, this is one of the more common Prizms with a run of 99. Therefore, expect to pick this one up on the cheap. Like under $15 cheap. However, if you want to go big, one of the more limited parallels such as the Gold Prizm will take you more than $100 to bring home. In addition to the base cards, you’ll find a whole bunch of incredible inserts along with the 2021 Mosaic Rookie Autographs line. Truly a collection that covers all tastes.

Okay, maybe the folks out in the desert are making too big of a deal over this little 9-yard scamper they’re calling a “trick play”. However, overblown as it is, it serves to show just how many ways thge kid can be used. And sometimes it’s multiple-threat players like Rondale Moore who come out of nowhere to take the league by storm. Expect some growing pains but there should be some money to be made if you buy a couple of Rondale Moore football cards this year. 7/10

If the Cardinals use Moore correctly he’ll be a reliable target for Kyler Murray for years to come. However, we’ve all seen electrifying go belly up once they get a taste of NFL action. Any fan who’s had to watch Tavon Austin play NFL football can certainly tell you that. See how his rookie season goes before you start thinking this far down the road. 5/10