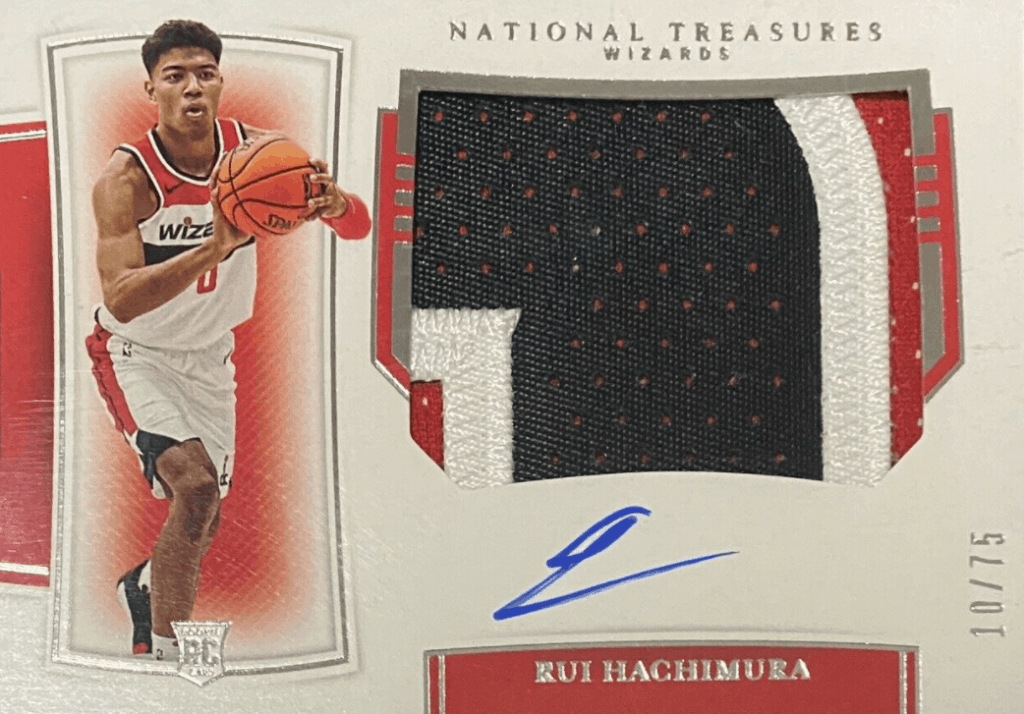 Looking for a Rui Hachimura National Treasures card? We like where your head is at! The set has consistently proven its ability to stay relevant in the high-end basketball card trading market and has no signs of slowing down. And you know who else has shown no signs of slowing down? Rui Hachimura. That’s why it seems Rui and National Treasures are a perfect match. Before we go over our favorite options, let’s get to know Rui a little better.

Rui Hachimura: Road to the NBA

When it comes to the excruciating path that leads to playing in the NBA, Rui Hachimura does not have a typical story. Hachimura was born in Toyama, Japan in 1998 and became a breakout basketball star while in high school. He led his high school team to three-straight All-Japan High School Tournament Titles, a feat that generated plenty of attention and helped get him to where he is now.

After winning that third All-Japan High School Tournament Title, he was invited to the Jordan Brand Classic which helped him expand his growing mark in the game. Then in November of 2015, Hachimura signed a letter of intent to play for the Gonzaga Bulldogs. An excellent choice if you want to be on a winning team. And as Hachimura was considered to be one of the top international players entering college, you know there was going to be plenty of winning going on with that combination.

Before he got to Gonzaga, Hachimura had to jump over a few hurdles such as English proficiency and the SAT. He ended up fulfilling both requirements and suited up for his freshmen season with Mark Few and the Bulldogs.

He played at Gonzaga from 2016 to 2019 and was a star for the program. In his last season Rui led Gonzaga in scoring with nearly 20 points a game and also chipped in 6.5 boards per game as well. Hachimura was a Consensus All-American in 2019, won the Julius Erving Award for the nation’s top small forward, and was named the WCC Player of the Year. During his three years, he was named to two First-Team All-WCC teams.

He decided to forego his final year at Gonzaga and declared for the NBA Draft in 2019. So far, that decision has proven to go well for the young man from Japan. The Washington Wizards selected Hachimura ninth-overall. He became just the second Japan-born player to be drafted into the National Basketball Association. On October 23, 2019, Hachimura made his NBA debut, posting a double-double (14 points, 10 rebounds) as a starter in a 100–108 loss to the Dallas Mavericks. At the end of the season, he was named to the second-team All-NBA Team.

At this point, it seems clear that Rui Hachimura has put the NBA on notice. Perhaps that’s why National Treasures cards are driving some big sale prices on the open market. Now let’s see what options are out there! 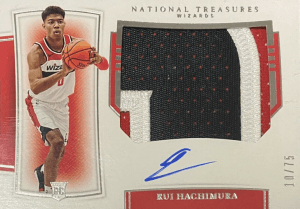 This is a beautiful card that features Hachimura passing the ball with purpose. On top of that, the card features the player’s autograph along with a patch, of course. There’s only 75 made which makes this a good mid to low-tier card option. 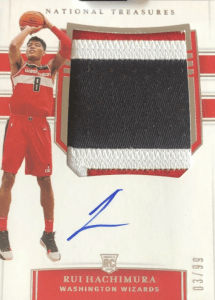 While there’s more if this one made than the card above, it’s quite a bit more valuable. So far this seems to be the card of choice for early Rui Hachimura National Treasures card investors. And it shows in the prices. No problem generating over $3,000 at an eBay auction. 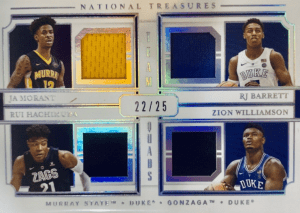 First of all, you’ve got to be impressed with the amount of raw talent on this card. And if you feel like taking a gamble, this card could EXPLODE in value if all of these guys pan out. On the flip side, if enough of the guys on the card turns out to be bums, you won’t be happy. 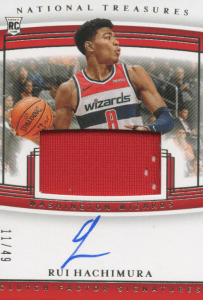 A true low-end investment with plenty of room to grow. What’s not to like? Oh, and did we mention the card is features Rui in that beloved striped Wizards jersey? Additionally, the card shows Rui looking to pass as if he were Josh Allen dropping back in the pocket. An all-around exciting card that won’t cost half your bankroll.

Just like Rui, Dennis Rodman also made the transition from SF to PF. But unlike Rui, the man didn’t have a true rookie card! See which one folks consider Rodman’s RC.

Short Term (Less than a year)

After what we saw in his rookie season, we are thrilled about Rui’s chances for a breakout sophomore campaign. And we’re far from the only ones taking such a Bullish position on Hachimura. And if he does break out? Let’s just say you can expect a pop in the Rui Hachimura National Treasures card market. Or any of his trading card markets for that matter! Just look at what an amazing 2nd season did to the value of Luka Donic rookie cards. 9/10

So what’s better in this case, a short or a medium-term investment? The answer isn’t easy. On one hand, you should be able to make QUICK profits without having your money tied up for a long period of time if you go short. However, Rui is the kind of player with the potential to make those short term profits look like chump change if he continues to get better each year. Hard to see wrong in either option. Toss up! 9/10

Sure, this strategy is great if we’re talking about a Shaq rookie card. But with a player this young, there’s still way too much for him to prove before we start thing more than 5 years down the road. Plus, if all goes right, you’ll have way too many opportunities to cash in before then. If you misjudge the medium-term market and don’t find the right selling opportunity, consider this as a backup plan. 3/10