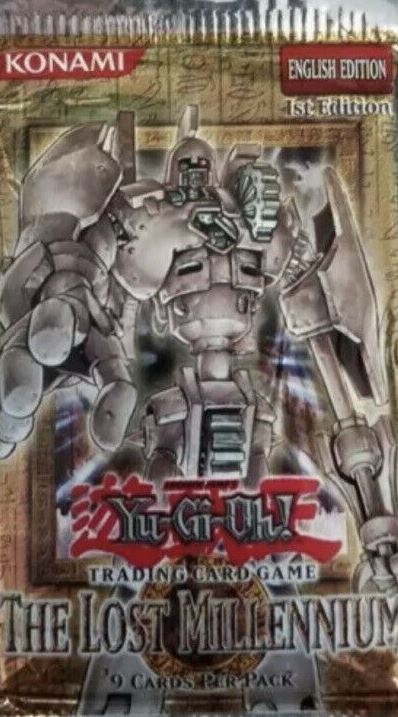 If you’re on the hunt for the best YuGiOh packs to buy in 2021, you’re likely well versed in the origins of this phenomenal card game. However, just in case there are some folks out there who are only in it for the collecting, we feel the obligation to take a look at how YuGiOh became what it is today. All those who are already familiar with this, go ahead and scroll down to get to those packs!

Related Content: Check out the most valuable YuGiOh cards of all time!

A Brief History of YuGiOh

Yu-Gi-Oh started off as a series that was popularized in a Japanese magazine called Weekly Shonen Jump between 1996 and 2004. The story focused on the character of Yugi Mutou. The pivotal moment in Yugi’s life comes when he discovers a thing called the Millennium Puzzle. Soon after we find ole’ Yugi transformed into another being whose alter-ego is that of a gambler. One characteristic of the gambler is his uncanny desire to challenge any and all opponents and foes to Shadow games. The losers of those games would go on to be punished via a Penalty Game.

As you might have noticed, Kazuki Takahashi, the creator of Yu-Gi-Oh, had always had a keen interest in games throughout his life. Through the alter ego, Kazuki sent a message that people have a hidden inner strength within themselves. A strength that should be unleashed when times got tough. And if you ever played the card game, you know that message all too well!

Speaking of the card game, did you know that it stands above even the legendary Pokemon in terms of popularity? Believe it or not,  YuGiOh was recognized by Guinness World Records for being the best-selling card game in HISTORY. As of January 2021, the card game has sold more than 35 billion cards in total. Thus, it is no secret that Yu-Gi-Oh trading cards are a hot item for collectors. Now let’s take a look at some of the best Yu-Gi-oh packs to buy this year! 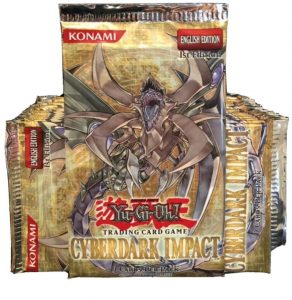 The front of this pack has a golden hue that screams BUY ME NOW. Once you get past that you can’t help but notice the armored dragon. Don’t let the purple hue of this dragon fool you as he’s about intimating as they come. These aren’t easy to come by so just know they won’t come cheap. Pull a rare enough card and you’ll get over the high price pretty quickly. 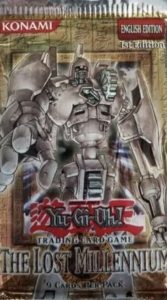 The Yu-Gi-Oh Lost Millennium First Edition pack has a reddish hue across the outline of the pack that helps to highlight the giant metallic knight-like figure displayed prominently in the center. Another one of the all-time greatest collections, Lost Millenium 1st Edition packs sell for even more than Cyberdark Impact. With the cards you could get it’s easy to see why. By the way, you’ll receive 9 of them in each pack so here’s to you pulling one that’ll pay for the cost of your pack ten times over! If you looking for the BEST YuGiOh pack to buy as far as the risk vs reward factor is concerned you’d be hard-pressed to find one better. 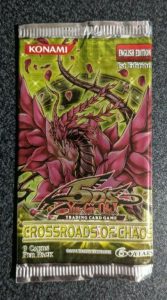 The front of this pack features a ferocious-looking dragon with a take-no-prisoners attitude. So don’t be fooled by that pinkish body and purple outline. This guy means business!

The 1st Edition Booster pack of Cross Roads of Chaos is nothing less than an all-time classic. So much so that people will even pay a few bucks just for an empty wrapper like the one shown above.
If you’re lucky enough to get your hands on an actual pack expect to find 5 cards inside. Lot’s of potential here for a decent price! 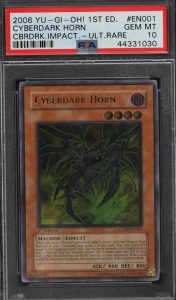 A gruesome creature that gains ATK equal to your equipped card’s ATK. As far as its own stats go, Cyberdark Horn is packing both ATK and DEF at an 800 level clip. As you can see you do not want to take this guy lightly. And gruesome as he may be, you shouldn’t be turned off if he pops out of one of your packs. Ultra rare and a dream of every collector, Cyberdark Horn sells for more than $700 if it’s graded 10 by PSA. 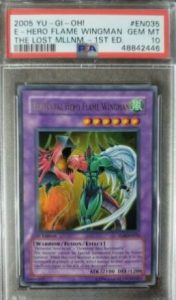 Without a doubt, this is one Wingman you’d like to have by your side when the going gets tough. Don’t believe us? Well if you go to battle with this Wingman he’ll inflict damage to your opponent every time he sends a monster to the graveyard. The damage inflicted by “The Wingster” is equal to the ATK of whatever monster he says “night night” to.

Almost as impressive as his battle skills is The Wingster’s value. Just like the last card he goes for somewhere around $700 if graded 10 by PSA. 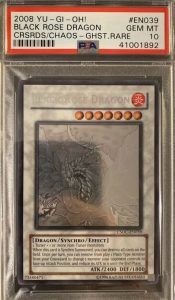 A card so hot it’ll make the snow melt. Or the water boil if you’re one that lives in a tropical climate. At any rate, the Black Rose Dragon is an incredibly sought-after card, and given its 2,400 ATK and 1,800 DEF it’s easy to see why. In addition to being coveted by collectors everywhere, this card is incredibly rare. Something you can tell right off the bat once you realize these sell for more than $1,000 without being graded.

See if any of the previous cards made our Hottest YuGiOh Cards 2021 list!