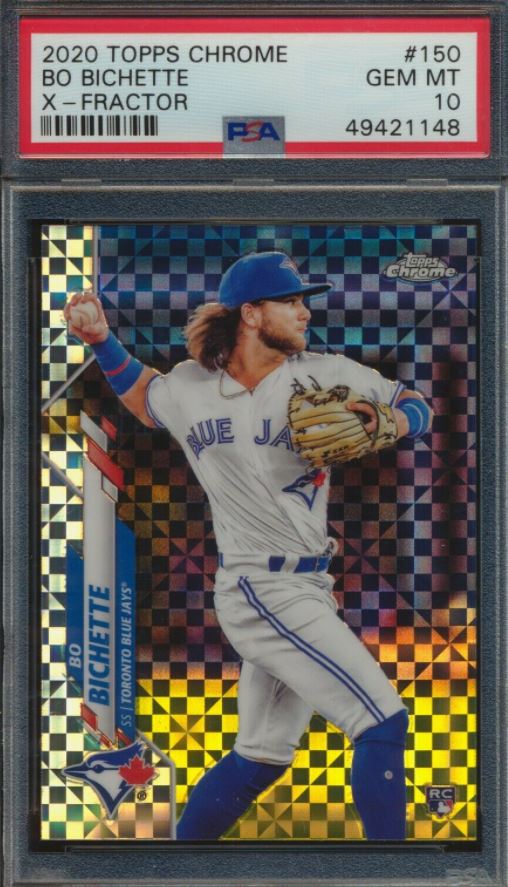 While the Bo Bichette rookie card market is no longer a secret, that doesn’t mean it doesn’t have plenty of room to grow. Sure, the young shortstop for the Toronto Blue Jays has pretty much taken the league by storm since his first taste of action in 2019. And it is easy to see why. Bichette is a flashy young athlete who is full of talent. Perhaps more so at the plate than on the field, but hey, nobody’s perfect! In addition to the live bat, that defiant long hair and the fact that he’s the son of an amazing power-hitting oufielder don’t hurt either. Whatever it takes to grabs people’s attention! But just because he seems to be firing on all cylinders, doesn’t mean there still isn’t plenty of more to come.

As far as the numbers go, Bo started out hot his rookie year maintaining a .311 batting average to go along with a slugging percentage of .571. He followed up in the shortened 2020 season by hitting over .300 once again and showed both decent power and speed. And this year? Bichette appears to have a decent shot at a 30 homerun/20 stolen base season all while hitting for a good average.

But what we still haven’t seen are things that come with more experience. Such as Bichette’s first full season of at-bats and possibly some post-season theatrics. So when it comes to buying Bo Bichette rookie cards, the value is not only centered around his play this year but for many years to come. And that’s our favorite type of player. Let’s see what’s out there! 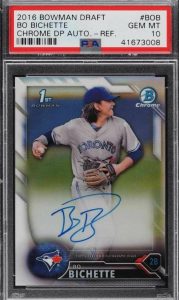 This is where you should start in your search for a Bo Bichette rookie card investment. It’s the most popular, most valuable, and it has all kinds of different refractors to choose from. As far as value goes, some of the crazy rare autographed cards can approach $5,000 or more. Meanwhile, there are some more moderate investments such as the autographed base cards or non-auto refractors go for $500 -$1,000. Even the base card in the right condition is worth a couple of hundred bucks! 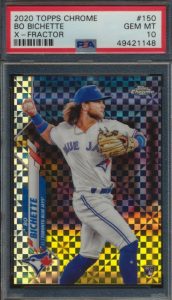 Flash forward a few years and Bo goes from a prospect to a true rookie. And the 2020 Chrome collection is the one to look at if you want a Bowman RC card with Bichette on the front. While not as valuable as the prospect card above, this is a great collection to target if you’re looking for a more moderate investment. For instance, that 10 grade X-Fractor above is right at $500. However, just like the 2016 set, it has a wide array of cards with a variety of values so there should be something in your price range.

At first glance, you might think this is a home run swing but if you look closely you may start to think it’s just a pop foul to the first basemen based on the lack of excitement on Bo’s face. Either way, that’s not why we’re here anyway. What we ARE here for is the wide number of amazing parallels and those autographs. Those cards will cost you a little bit more when compared to the base cards from this set but if you’re a believer in Bo’s potential, why not? Plus they’ll look MUCH better in your collection than just the bland ole’ base. Look for the Silver Optic if you’re not looking to break the bank. If you are, hone in on one of the less common autographed Optics like the Red. 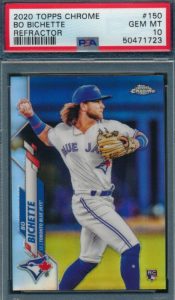 This card is similar to the Donruss card we just reviewed in the comes in a variety of parallels and is available with an autograph. However, the photo is of Bo in the field rather than at the plate as he’s in the middle of what looks to be the makings of a double play. Another thing that makes this one much different from the Donruss is its value. While there are parallels in the casual range of a few hundred, some are approaching more than $2,000. Be on the lookout for a variety of image variations as well. 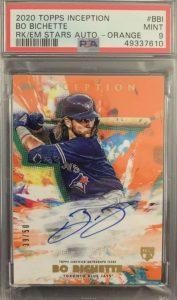 This is arguably the flashiest Bo Bichette rookie card that money can buy. Just look at that colorful card art! Some may say it is designed to look more like a work of art than a true baseball card, but we’re not so sure we’d take it that far. This card is fairly rare as it comes from the limited Inception Collection so even the most basic cards are worth a few bucks. We recommend taking a look at that Orange autograph parallel above as it should be available for just a few hundred depending on the grade.

Is it time to strike on a Willie Calhoun rookie card?

If Bo produces in his first full season in the big leagues we should see some decent gains from where prices sit today by the end of the year. Add to that an All-Star appearance or a playoff run and those gains go from decent to VERY NICE. However, Bo’s tendency to strike out sinks his average, or an injury wrecks the season you may be either selling at a loss or holding until next season. 7/10

Bichette has shown he is more than capable of handling MLB pitching as he has done it since day one. Something that is incredibly rare compared to how most prospects fair their first go-round. This leads us to believe there are only better things to come so if the true breakout isn’t this year, we’d bank it on being right around the corner. 8/10