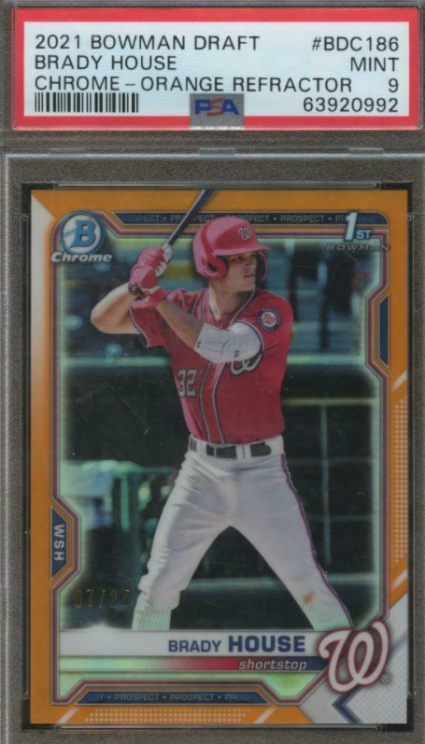 A 1st round pick is ALWAYS worth taking into consideration when it comes to speculative baseball card investing. And with a guy at age 18, we do mean speculative. Now you may be wondering who on earth we are talking about here. Hint: it’s a short stop. Another hint: it’s someone the Nationals are hoping will eventually become a corner stone of the left side of their infield. You guessed it, we’re about to take a look at the first Brady House rookie card releases. Now there isn’t much out there so far so expect a quick read. However, while the quantity may not be great, the QUALITY is. Let’s find out what’s first on our list! 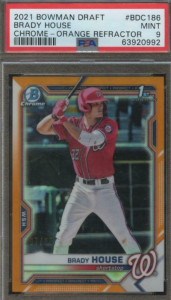 Of course! When  it comes to prospect cards, the buck stops here. Figuratively, that is. Literally, the bucks move fast. Really fast. For instance, the card you see above is an orange refractor with no autograph. Recent sale price? Darn near $1,000! As you can see, Bowman Chrome Draft isn’t playing when it comes to big values. However, that doesn’t mean there isn’t room for the casual investor. There are plenty of more common refractors for well under $100. 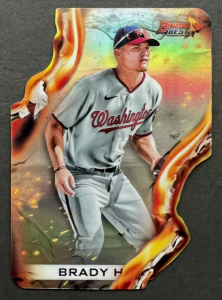 While we question the name (it’s not Bowman’s best collection), this is a solid set of cards nonetheless. Bowman’s Best offers hobbyists an easy way into the Bowman prospect world with much cheaper options across the board. At this point there’s hard to find a Bowman’s Best Brady House rookie card worth hundreds of dollars much less thousands. And for some collector’s that’s a great thing. You can load up on rare cards for a fraction of the price as what they’d cost you with Chrome Draft. And if you’re a box breaker? Yep, those are plenty cheaper as well. So if you don’t want to settle for a common refractor or a base card from Chrome, take a long look at Bowman’s Best. You may just find what you’re looking for. 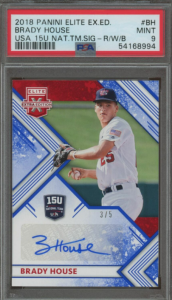 While this ain’t no Bowman, it’s still a gem of a card. Panini is better known for it’s football and basketball dominance but offers a unique approach to the very first Brady House rookie card. And by first we mean first. Just take a look at the year it was printed. Anyways, the card features Brady from his days as a high school All-American and comes available with an autograph. The one shown here is a rare /5 that holds a value of somewhere around $200. If first to market is of importance to you, don’t look any further!

At only 18, it’ll take some time for House to reach the big leagues. Once he does? Sky’s the limit. He has a 6’4″ frame and should fill into it nicely over the upcoming seasons. Meaning we should see PLENTY of power. On top of that the kid makes hard contact and can hit to all fields. Patience is the key so if you happen to own a Brady House rookie card be prepared to hold. If not? Think about seeing how he performs in 2022 before making a big decision. If he runs through the low minor leagues with ease then consider it a GREEN LIGHT! If not? A buying opportunity could present itself in the offseason.