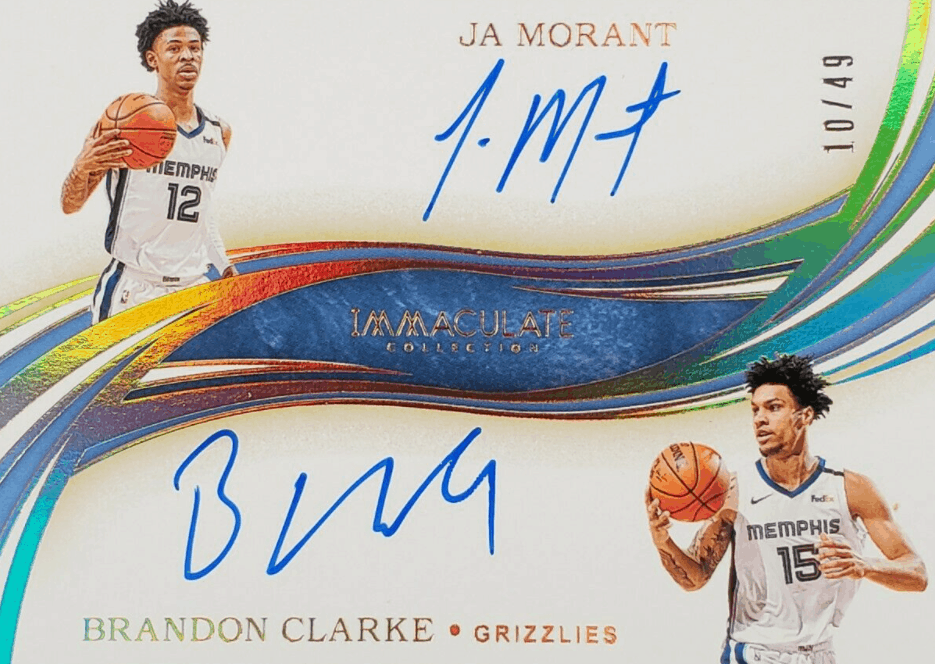 The Memphis Grizzley’s have got to be THRILLED with the way their two first-round draft picks performed in 2020. You likely know by now that the first pick, Ja Morant, took home the league’s Rookie of the Year honors last year. And this year Morant is certainly providing quite the encore.

While Morant is certainly the “big name” of those 2020 first-rounders, you’d be a fool to sleep the Grizzley’s OTHER first-round pick. On his way to winning a spot on the 2019-2020 NBA All-Rookie First Team, Clarke more than held his own with the big boys. In just 58 games (and just 4 started), Clarke average just over 12 points and nearly a block a game. On top of that, Clarke chipped in from behind the arc by averaging a three-pointer in every other game he played in. Not bad for the first go-round. And so far in 2021, Clarke is delivering the same steady performance.

With both Morant and Clarke showing they’re more than ready for the NBA, you can only assume even better things are coming for this dynamic duo. Which is a great reason to invest in BOTH players’ rookie cards! Here are some of Clarke’s. 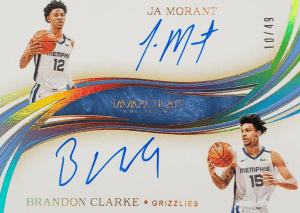 First things first, a card with teammate and fellow 2020 rookie Ja Morant is almost irresistible. Add to that a sleek and colorful design that’s laid on in a horizontal format and you’ve got yourself a card worth talking about. There are only 49 of these made which makes this a pretty rare find. Expect to pay somewhere between $1,000 and $1,500 if this is the one you decide on. 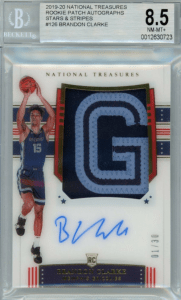 Now if you’re looking to unload the war chest, National Treasures is the set you should be focused on. Heck, even a grade 8.5 recently sold on eBay for over $2,000. Just imagine what you’d have to pay for a 9.5 or 10. A gamble on an ungraded version hoping for this outcome might be something to consider! 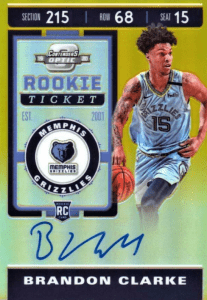 A great card to target while you can still get it for under $1,000. The card shows Clarke pressing down the court while in front of a brilliant gold backdrop. The only problem is you won’t see this card surface too often as there are only 10 of them. 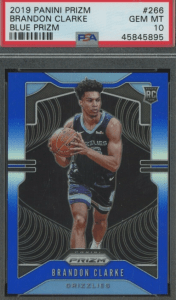 We’ve said it before and we’ll say it again – when it comes to OPTIONS, nobody does it like Panini Prizm. No matter what amount of money you’re looking to invest, this set has a card that’s right for your portfolio! Looking for a small or medium play? Grab one of the more common Prizms. Going big? Find one of those 10 or fewer variations and UNLOAD. 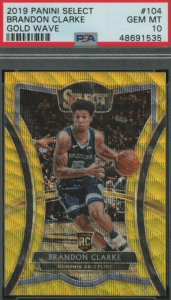 Just like the Prizm set, its little brother Panini Select comes in hot as far as options go. If you’re looking for a quality card with plenty of resale value, this is a set you should take a moment to consider. Plenty of great low to mid-range investment opportunities. 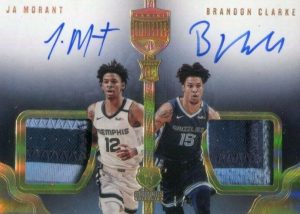 With such a pretentious name you’d hope this set would deliver on some big-time Brandon Clarke rookie cards. And that it does. That it does, indeed. You won’t see these turn up for sale often because they’re incredibly rare with the most valuable being print runs of 5 or less. Looking for the elusive 1/1 LOGOMAN? Be prepared to shell out at least $5,000. Just need to have that Ja Morant mash-up? That’ll be $4,000 big ones, please. Or what about the more common autographed signature rookie card with a print run of 10? Darn near $1,000. You get the picture. This is the set for the whales out there. If they’re lucky enough to find one up for sale!

With Clarke backing up his rookie season with a solid 2021 performance so far, there should be no shortage of potential buyers throughout the season. However, we’d like to see more than just solid at some point soon to feel confident in a decent profit margin come season’s end. While we still like a short-term play here, we don’t like it as much as we did before the season began. 7/10

We can’t help but be optimistic about the future of the Memphis Grizzlies. If the story of Morant and Clarke plays out like everyone in Memphis is hoping, you’ll be seeing green. However, if one falls flat it could spell bad news for the other. As far as Clarke goes, we think he’ll take the next step forward within the next few years. If the breakout doesn’t come this year feel comfortable that it will soon. 7.5/10

As you can see we like the short and mid-term futures of this market. BUT, let’s not get ahead of ourselves. Check back in 4 years and we’ll have a better idea of whether or not this train of thought is warranted!