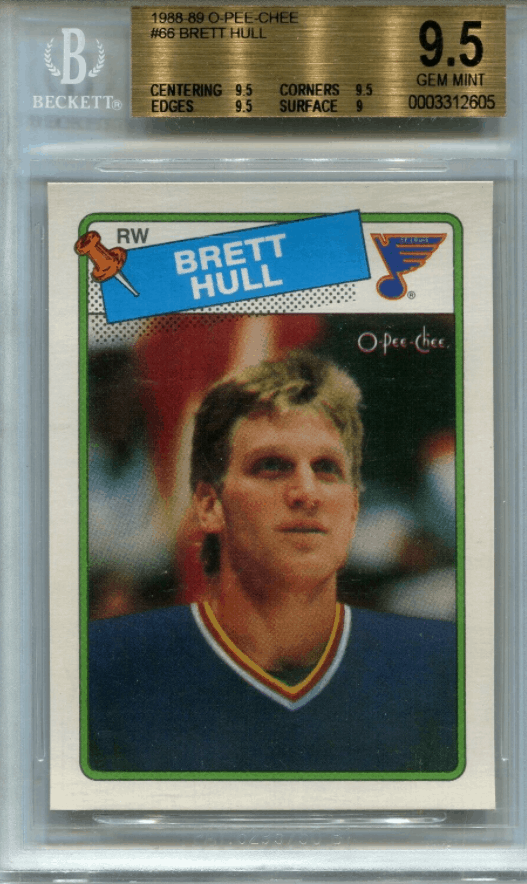 Are you currently radar-locked on a Brett Hull rookie card? That makes plenty of sense because the guy cemented his legacy in the National Hockey League by being one of the greatest snipers/sharpshooters the game has ever seen. We’d only expect you to have the same Hull-like focus while on the hunt for one of his top rookie cards! Before we throw you some suggestions, let’s take a minute to understand why Hull if one of the most captivating players to ever take the ice.

A Look Back at the Career of Brett Hull

Brett Hull was a long-time member of the St. Louis Blues and accomplished most of his individual accolades while in St. Louis. In addition to the Blues, Hull also played for the Calgary Flames, Phoenix Coyotes, Dallas Stars, and Detroit Wings. The man currently ranks fourth on the all-time NHL goal scorers list with 741 and he is one of five players to score 50 goals in 50 games. He went on to win two Stanley Cups in his career, one with the Stars in 1999 and the other with the Red Wings in 2002 (much to the dismay of Blues fans).

After calling it quits, Hull was inducted into the Hall of Fame on the first ballot in 2009, making it the only time a father and son were inducted. Bobby and Brett are also the only father-son pair to score 1,000 points, by the way. Most recently Hull grabbed quite a bit of attention for his passionate celebrating after the Blues finally won their first Stanley Cup in 2019.

This is only a brief summary of Hull’s greatness but as you can see, he’s one of the best to ever play.  Which is probably why you’re looking for a Brett Hull rookie card. So let’s cut the suspense and roll’em out! 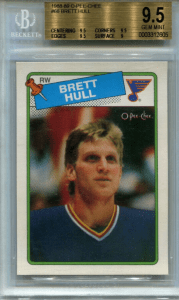 This card is one of the most iconic cards to come out of the 80s. The card features a wide-eyed Hull with an expression that can only be interpreted as youthful exuberance. Although Hull began his career with the Flames, he was traded to the Blues during his rookie season, making this card especially nice for those Blues fans who like to pretend Hull was theirs from the beginning. Anyways, this is a truly special card and Hull’s most valuable. 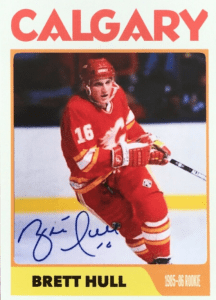 Rember what we said about those Blues fans liking to pretend Hull began in St. Louis? Well, apparently there are some Calgary fans that love shattering that delusion. Check out this custom made card made by a seller, for fun. While there isn’t a lot of value in this card (if any) if you are a Flames fan who wants to torture yourself with the thought of “what if?” this is the card for you. While we wouldn’t suggest bringing it to a trading show, owning a card like this is cool for a collection or just a keepsake. 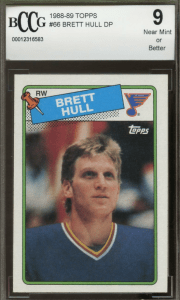 Pretty much the same card as the first one with a few minor differences. The Topps and O-Pee-Chee are also very similar in prices (just like with Barry Bonds rookie cards). In the end, it just comes down to what brand you prefer.  OR, you could just go ahead and swoop up both! 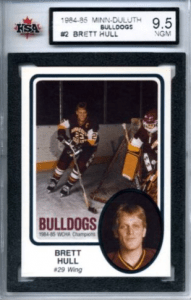 This is one of the coolest cards that we found on the web for a Brett Hull Rookie Card. While this may not be a card from his playing days in the NHL, this card is from when Hull was playing for Minnesota-Duluth. It was then when Hull won the Jerry Chumola Award as the school’s rookie of the year. Hull was an all-time great at UMD for the Bulldogs and broke many school records. In his rookie season there, he scored 32 goals and ended up scoring 50 goals in a season, becoming one of the NCAA and WCHL’s best players. 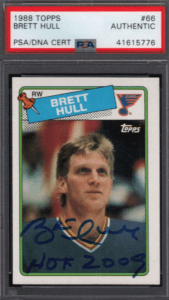 If it looks like you’ve seen this card before, it’s because you have. It’s the iconic Brett Hull rookie card with an AUTOGRAPH.  It’s not like modern days when cards fall straight out of the pack with that valuable ink on them so it’s always nice to see an old-school card with a signature. While rare, you shouldn’t have too much trouble finding one in your price range.

Our Take on the Brett Hull Rookie Card Options:

It depends on what you are looking for in your Brett Hull Rookie Card. Looking for a card that’s going to hold it’s value? Well, then it’s a no-brainer. Grab one of the 1988 Topps or O-
Pee-Chees and ride off into the sunset with a smile from ear to ear on your face. If you’d like to spend a little less and still get a legit Brett Hull rookie card, the 1985 Bulldogs is the way to go.

Finally, if you’re a die-hard Calgary fan that can’t help wondering what could have been, might as well pick up that clown card we talked about in option two. It’s actually a really good looking card and will probably get a few laughs from your buddies. Or a few eye-rolls. Or maybe even some concerned looks.  Might be a good idea to stay away from that one altogether on second thought!

No matter which card you decide to go with, you can be assured you’re investing in a name and legacy that will always be cherished by NHL historians. So whether you’re a Blues fan reliving the glory days, a Calgary fan wondering what if, or a Stars or Redwings fan flashing the Stanley Cup reminder, you can’t go wrong investing in Brett Hull.