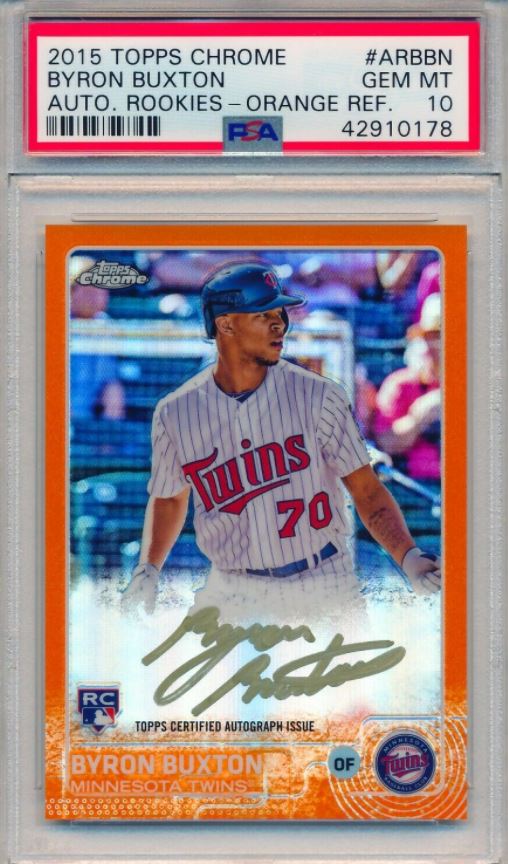 With his red hot start to the 2021 season, there is sure to be some renewed interest in the Byron Buxton rookie card market. FINALLY. And if this is indeed the year where Buxton lives up to his “generational talent” prospect branding, those who decided to take a chance during the many buy-low opportunities throughout the years should be rewarded handsomely. The question is, is will he do so? While it’s still too early to tell if this is a true breakout, the signs are certainly encouraging.

In fact, this upward trend in Buxton’s batting skills goes all the way back to the shortened 2020 season where the 5 tool player finally harnessed the one tool that puts the fans in the seats more than any other. Power. And lot’s of it. In only 130 at bat’s last season, Buxton Clobbered 13 home runs and slugged a staggering .577. Welcome to the Big Show, Byron. Better late than never.

And as we mentioned earlier, in 2021 Buxton appears to be picking up right where he left off. In only 20 at-bats this season he’s already left the yard 4 times and owns a batting average of .421. While that kind of production clearly isn’t sustainable, we’ve seen enough to be confident in picking up one of the following Byron Buxton rookie cards!

Speaking of top prospects who are beginning to live up to the potential…. 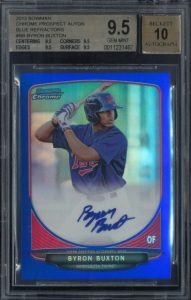 His first even Bowman card is the most appropriate place to start as it holds the honors of the undisputed king of Byron Buxton rookie card choices. As far as value goes, even some of the rarest parallels and still available for less than $1,000. And that includes an autograph and a mint condition grade. For instance, the Blue Refractor shown above is sitting right around the $900 mark as a BGS 10. If you’re not willing to spend that much consider an autographed base card for around $200. 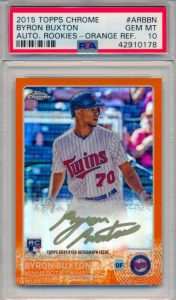 Here we have Buxton’s most lucrative true rookie card. Moderate investors (or those who aren’t completely sold yet) will be attracted to this collection as it doesn’t come with the price tags of the 2013 Bowman Chrome set. Plenty of great options available for less than $300. 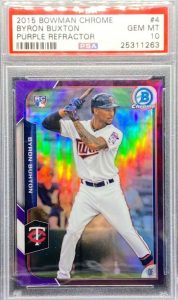 Another card from Bowman, this one a true rookie card rather than a prospect card. It features Buxton in the batter’s box waiting on the pitcher to make a mistake (but given the way his rookie year went he probably just struck out). This is the perfect card for casual investors as there are a number of options you can pick up for less than $100.

Are there any other Byron Buxton Topps rookie card options? 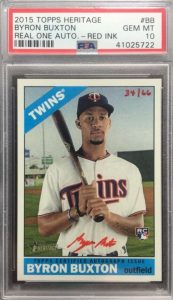 Yes! While we’ve only listed the Top 3, there are plenty of other solid options and Topps offers the most. If you’re looking for something a little different, take a trip down memory lane and go with the retro Topps Heritage collection from 2015 (beautiful cards). Meanwhile, if you’re into the more modern look, the 2015 Topps Update has you covered. Other notable Byron Buxton rookie card options from Topps include 2015 Strata, Supreme, and Dynasty.

This seems to be the most viable option – at least for right now. If Buxton continues to rake and becomes the five-tool star everyone pegged him as you’ll be sitting pretty by the end of the season. If you’re happy with smaller gains you could even consider selling if he’s still hot going into the All-Star Break. When it comes to Buxton, you know there’s a decent amount of risk but we think the potential reward warrants a BUY. 7.5/10

This is certainly something you’ll need to consider if 2021 ends up becoming the long-awaited breakout campaign. If so, we’d feel incredibly confident about forgoing the short-term profits and holding out for an even bigger score down the road. 7/10

Hopefully a few years from now, this will becomes a reasonable idea. But we’re not there yet. Byron Buxton has a long way to go before he proves he’s capable of putting up the kind of numbers that make collectors want to hold on for the long haul. For now, be happy with your short to mid-term gains and hope for the best.

3 Investment We Like Better Than a Byron Buxton Rookie Card