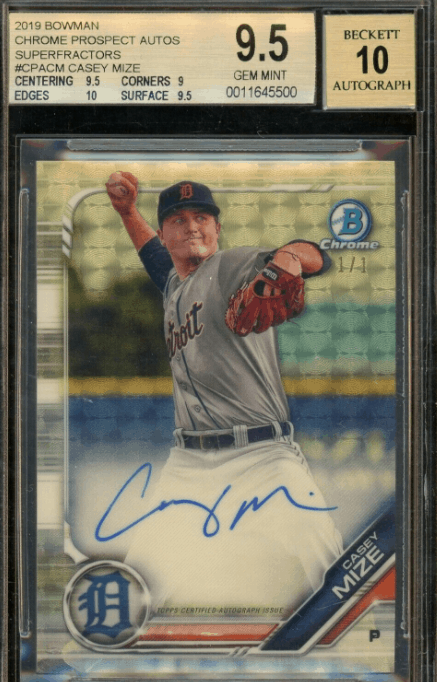 With a so-so debut season and early spring training struggles in 2021, the Casey Mize rookie card market found it’s way to the back burner. Check that. The back burner on the old stove that’s sitting in the garage waiting to be hauled up to Good Will. Compared to what it was leading up to his 2020 MLB debut, perhaps so. However, right when many were ready to label him a draft day bust, Mize appears to be breaking out in a big way. Something that explains the renewed interest and increasing values of his rookie cards.

Casey Mize:  The Story So Far

At only age 23, it’s hard to believe Casey Mize spent 3 seasons playing college ball before being drafted.  During those seasons at Auburn, Mize impressed scouts by piling up 324 strikeouts over 267 innings and posting a 2.96 ERA with a .980 WHIP.  Warranted or not, those numbers were good enough to get Mize drafted first overall in the 2018 MLB Draft.

After being drafted by the Tigers, Mize made quick work of the minors leagues.  Over only 123 innings, Mize was impressive enough to earn a call up to the big leagues.  Even before he ever pitched an inning at AAA.  During that short time on the farm, Mize posted numbers that were remarkably similar to those he put up in college including a sub 3 ERA (2.71) and a sub 1 WHIP (.967).  However, the strikeout rate fell off with only 120 (slightly under a K per 9).

As we eluded to earlier, Mize was by no means lights out in his debut season. However, that doesn’t mean it was awful either. In fact, some might say he held his own for the first go-round. In 98 innings of work, Mize flashed the swing and miss we were hoping for with 101 strikeouts. However, his command was lackluster with a whopping 3.7 walks per 9. Something that played a huge role in his 1.327 WHIP for the season. While Mize is showing more problems of that this spring, it’s still incredibly early. He didn’t show many problems with the command in the minors and he certainly has the talent to find his rhythm.

At the end of the day, the command problem’s that have been haunting him since he appeared in a Tiger’s uniform make a Casey Mize rookie card investment far from a safe play. However, if it can be fixed, the upside is significant. Just take a look at what it did for former top prospect, to former bust, to staff ace Lucas Giolito. Therefore, buying low on one of the following cards could end up being a move you won’t regret.

While it’s still early on in the season, you can help but like the direction, Mize is heading. Although he got off to a slow start, Mize has now given up less than two runs on average over his last 5 starts. On top of that, he’s working deeper into games averaging more than 6 innings per start during that same time frame. Something you like to see out of a potential staff anchor. If this trend continues, we should see a continued appreciation in the Casey Mize rookie card market as the season goes on. Here are a few of the best Casey Mize rookie card options if you’re to bank on the former #1 pick’s continued breakout.

Step aside Casey Mize, the Tigers have a new #1 prospect in town… 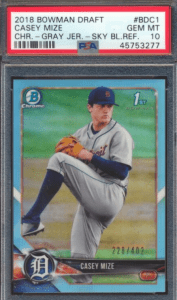 Like always, when it comes to prospects Bowman Chrome is THE card. The 2018 set is the first one that features Casey Mize and offers various refractor versions along with autographed cards. As far as looks go, it features Mize mid-delivery and accentuates that amazing leg kick. Before the season even high-grade autographed Caze Mize rookie cards from this set can be picked up for just a couple hundred bucks. While that price has risen, it’s still fairly low compared to where it could be going if Mize proves he’s for real. 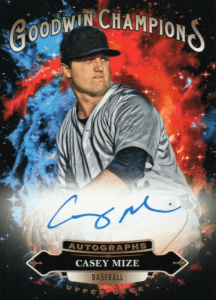 The 2020 Upper Deck Goodwin Champions offers a variety of styles including a “rookie patch” and even a horizontal layout. As far as value goes, you’ll need to seek out the rarest of rare autographed cards to even breach the $50 threshold. Low hanging fruit? 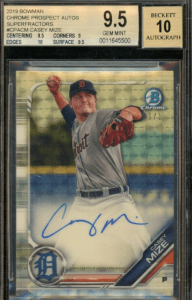 While not as coveted as the previous season, it’s certainly more affordable. So if you’re looking to mitigate your risk the 2019 Bowman Chrome Casey Mize rookie card is the one should go with.  Although you may regret not buying the 2018 version if Mize continues to be lights out this year. 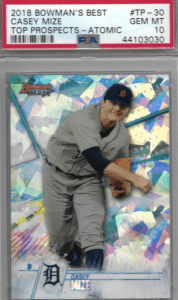 Here’s another way to hedge. Simply go with the Bowman’s Best set rather than the high-profile Chrome. True, it may not be as lucrative as the Chrome, but at the end of the day, it’s still made by Bowman. This one shows Casey showing off that devastating follow-through. 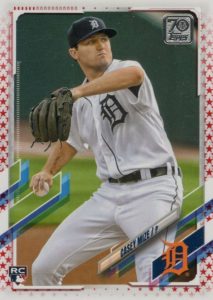 A “true” Casey Mize rookie card complete with the RC logo in the bottom corner. No frills, no gimmicks, just a solid baseball card from a tried and true collection made by Topps. 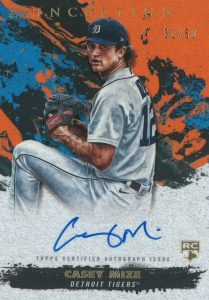 A high-end collection of cards with some great true Casey Mize rookie card options. Topps Inception has a limited checklist and features cards with short print runs so you’ll pay a higher price than your average set. Plenty of cards available in the $100-$500 range.

Another young arm you can bank on!

“Regardless of the command problems, Casey Mize’s future looks bright. He was talented enough to be drafted number 1 overall and has been extremely consistent during his time in college and the minors. Sure it’d be nice to see a little more swing and miss potential, but then again that didn’t make fellow Tiger prospect Takik Skubal’s pro-debut any easier!

No investment is a sure thing and there’s plenty of reason to shy away here. And we wouldn’t blame you if you did. But if you’re feeling like taking a risk, a medium to low-end investment might be worth it by the end of the season. And beyond for that matter. Especially at these prices.”

Right now that risk seems to be paying off nicely for those who decided to pick up a Casey Mize rookie card while they were at the bottom. As we said earlier, prices have risen but that doesn’t mean you’re too late. Mize still has a lot of work to do before he lives up to that number 1 pick billing. If you think he’ll eventually end up making good on those expectations, now would be a good time to get on board.