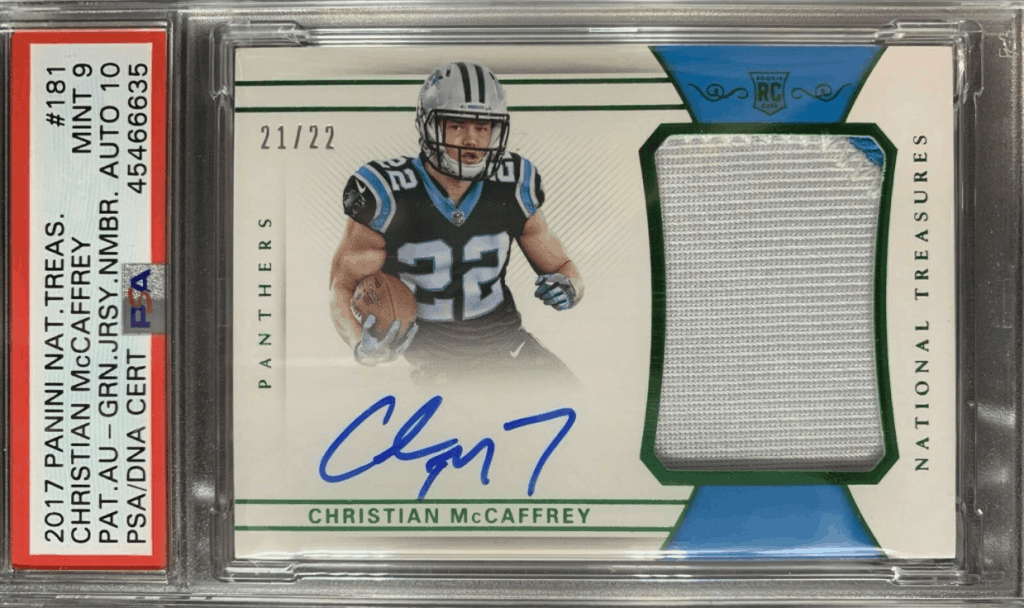 If you’ve been thinking about grabbing a Christian McCaffrey rookie card, you had to be encouraged by the way he played prior to the injury that ended his 2020 season. Christian McCaffrey was back to doing what he does best – doing everything it takes to make things happen on the football field. Does the guy ever take a down off?? Not often apparently. While his overall stat line wasn’t as crazy as some we’ve seen from him, McCaffrey was able to score 5 TDs in just 3 games and had a nice mixture of yards on the ground and through the air.

As far as the injuries go, McCaffrey doesn’t appear to need offseason surgery so we’re expecting him to pick things up where he left off once the 2021 season begins.

So now that we know McCaffrey should be ready to roll next season, now may be a good time to load up one some of his rookie cards. Or you could just continue to sit there in that 25-year-old Tim Biakabutuka jersey and refuse to admit a NEW era of Panther football is upon us. Sounds like an easy decision to us. Here’s some to McCaffrey rookie cards that’ll get you back up to speed!

Random side note:  Brady’s replacement in New England seems to have adjusted well to life without Christian McCaffrey.  Might be time to pick up a Cam Newton rookie card! 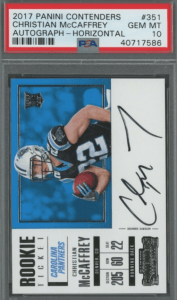 From the Rookie of the Year Red Prizm, to the Optics, to the Rookie Ticket shown above, there’s plenty of cards in this set to get excited about. So find one you like at a price you like even better and scoop and score like you’re Eddie Jackson! When it comes to value, the biggest price tags will come from the autographed rare “Tickets”. However, don’t let that combo scare you off. There’s plenty available for under $500. 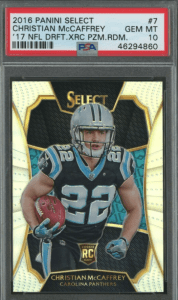 The Die Cut Gold Prizm is one of the most valuable at around $1,000 for a PSA 9 as supply is extremely limited (just like the Contenders Optics Gold only 10 were made). Can’t swing the Gold? Don’t worry, the less expensive Silver is a good investment at a fraction of the price and seems to make its way on and off the market often enough. 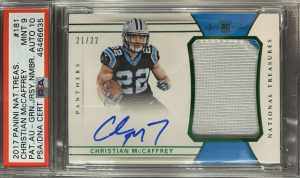 National Treasures has really made its market on the NFL trading card market. Therefore, it comes as no surprise to see this set on our Christian McCaffrey rookie card list. Go for one of the autograph versions if you’re looking to go big. There’s plenty of good cards in that $500 range. Wanna mix it up and spend a bit less at the same time? Look for the cards featuring Dalvin Cook and Leonard Fournette for under a hundo! 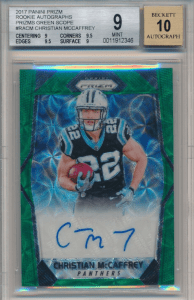 One of the most common Christain McCaffrey rookie cards you’re gonna see. But don’t let that fool you, these still can fetch a high price tag. For instance, many of the parallels will command around $1,000 for a 10 grade. No matter which one you decide on, you’ve got yourself a card that should have no problem selling when it’s time to unload. 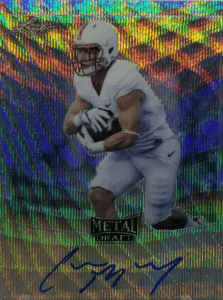 These cards may not be the most valuable BUT they sure are nice to look at.  And if you’re not looking to spend big, that can be a good thing. A great idea if your collector’s case needs a little shimmer. Loads upon loads of viable investment options for under $50 in this set.

Unlike up and coming rookies or second-year players, McCaffrey has established himself as one of the best (if not THE best) running backs in the league. While the stability is nice, his performance is way more priced-in than that of the Zac Veen rookie card market, for example. A big season won’t cause as significant of jump in prices, simply because it’s EXPECTED from McCaffrey. That said, a Comeback Player of the Year award in 2021 would definitely bolster the case for a short term flip. 7/10

While there may not be much that’s going to drive the value of your Christian McCaffrey rookie up in the short term,  collectors who are looking for a STABLE medium to long term investment can rest easy knowing that McCaffrey’s performance on the field is basically a given at this point.  If you’re looking to go medium term, hold onto it for a couple of years and hope an NFL MVP is in the near future. 8/10

If you’re long on McCaffrey, hunker down and hope he shatters some records on his way to what seems to be a Hall of Fame career in the making. He’s already got the third-most total yards from scrimmage in a season of ALL TIME. We expect to see much more of that throughout the years. Especially if the Panthers (or whoever else he could end up with down the road) put a team around him! 9/10

While we love a medium or long-term play on the Christian McCaffrey rookie card market, profits seem inevitable with all 3 investing options. And if you ARE going to think short term, it’s comforting to know McCaffrey’s 2021 can only be an improvement over his injury-shortened 2021. Buy with confidence!