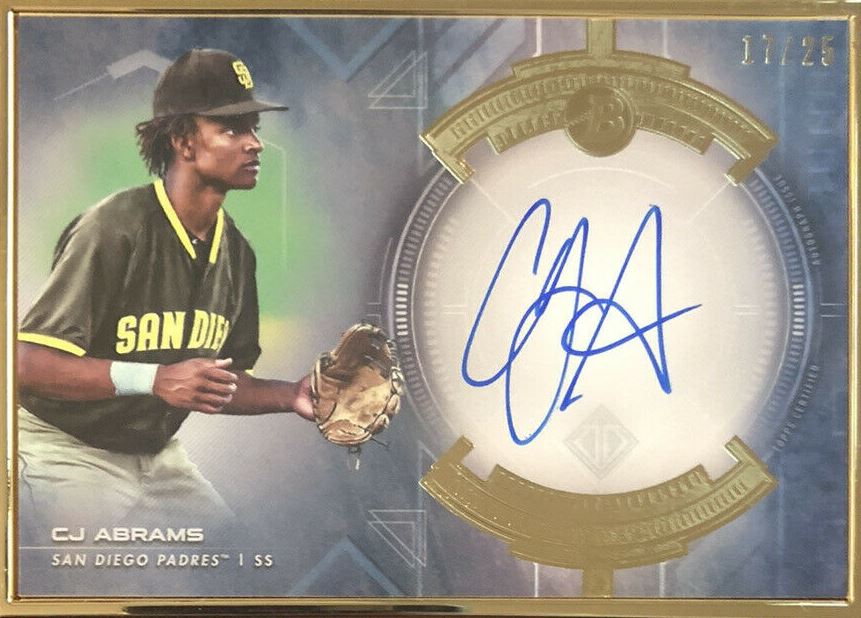 Unlike Adley Rustschman, CJ Abrams is a 2019 first-round selection that definitely DID NOT disappoint in his debut season down on the farm. In 142 ABS in 2019, Abrams displayed that hit/run combo that has all the scouts drooling by turning in a .401 average along with 15 stolen bases. Given, all but 8 of those ABs came in the AZ rookie league, but in the 2 games Abrams played in A Ball he continued the trend by adding a couple of hits and a double. Long story short, there are plenty of reasons to be confident about picking up a CJ Abrams rookie card before this year’s minor league season begins! Whenever that may be. 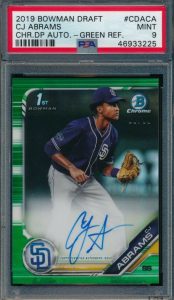 A simple image of Abrams alert and ready to field anything that comes his way highlights his most valuable card to date. The 2019 Chrome Draft set has a boatload of options to choose from. The base card will only set you back about $10 so if you spread your money out think about picking up a handful of these on the cheap. Meanwhile, the Refractors and autographed cards can be worth several hundred. If you REALLY want to go big on just one card look for a rare autographed Refractor like the card above as some of these sell for more than $1,000. 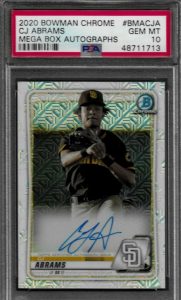 Fancy a game of catch? Pick up this card and you’ll feel like your tossing the ball around with CJ live and in person. Abrans is starting right at the camera with an open glove waiting for a crisp return. Not as valuable as the first card we’ve listed, the popular MOJO Refractor above can be picked up for somewhere around $100. And that’s WITH an autograph. However, if you want to drop a little more on your CJ Abrams rookie card investment look for rarer auto-Refractor combos like the Ornage MOJO. 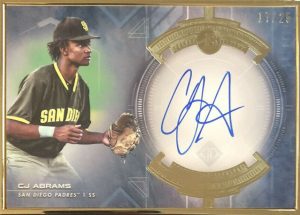 To find much value you’ll need to seek out the rare autographed cards in this set. Take the SSP shown above, for example. It comes with an on card autograph and has a print run of just 25. You should be able to pick it up for less than $200, which seems like a steel for a super rare card with CJ’s signature. 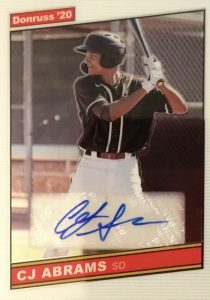 Now here is a CJ Abrams rookie card that you can REALLY load up on without putting a dent in your bankroll. Whether you go for the ’86 retro style edition shown above for the classic Rated Rookie, you can pick up plenty of cards for around $10.

Looking for a box you can pull a CJ Abrams rookie card out of?

Check out our “Best Baseball Card Boxes to Buy 2021” list!

With many of the players above him likely being called up in 2021, CJ Abrams could easily find himself as a Top 3 prospect heading into next season if he truns in a solid year on the farm. If that happens you card should be worth FAR more than it is now by the time spring training starts in 2022. With Abrams hard contact ability, speed, and emerging power, this doesn’t seem like a stretch. Not in the least. 9/10

We woudln’t fault you for thinking a couple of years out on this investment as 2022 is Abrams’ MLB ETA. As long as he performs in 2021, thinking about bigger profits down the road is a completly viable option. 8/10

While he is the number 8 prospect in the land, that doesn’t guarentee Abrams will make a big impact once he’s called up. If any. The Big Show has been the ruin of way too many top prospects to bank on any big league suscess. Even for the biggest of big name prospects. Watch closley over the next couple of years before considering anything further. N/A