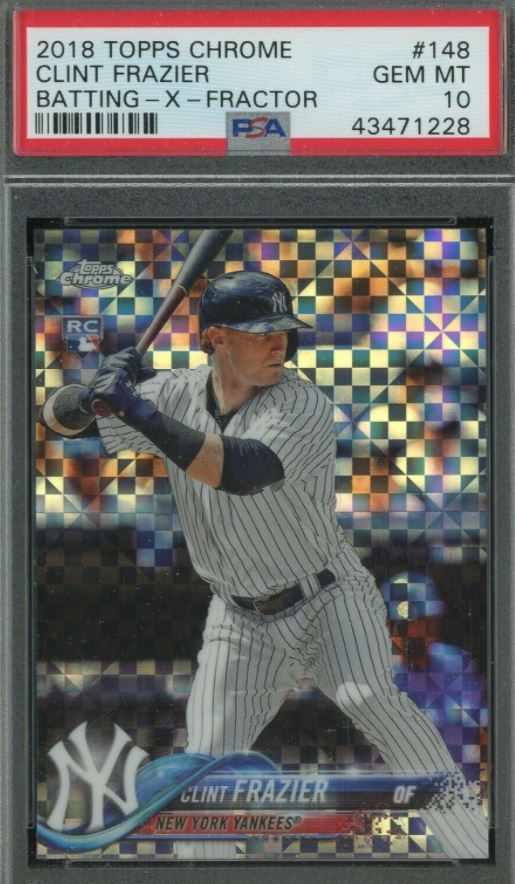 It’s been a long time coming, but we may finally see the Clint Fraizer rookie card market hit new highs in 2021. It’s been years since his first cards rolled out and many collectors have likely forgotten all about the former top prospect. That’s what happens when you’re never given a sustained shot to be an impact bat for a Major League club. However, with a secure spot in the Yankee’s lineup, we have a feeling there will be a renewed interest in both Fraizer and the baseball cards he’s featured on. Perhaps even a MASSIVE amount of renewed interest. That said, here are the best Clint Fraizer rookie card options to consider adding to your portfolio. 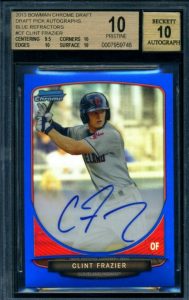 We’ll start with Clint’s biggest and best – none other than his 1st Bowman (of course). The card features a young Fraizer at the plate, laser-focused on the next offering. These come autographed and are available in a wide variety of parallels (like the Blue Refractor shown above). As far as value goes, some of the rarest autographed versions are currently sitting at around $1,000 if they’re in the right condition. Meanwhile, there are plenty of options for around the $100 mark if you just want a small taste (think about the more common Refractors, high-graded base cards, or autographed base cards that haven’t been graded). 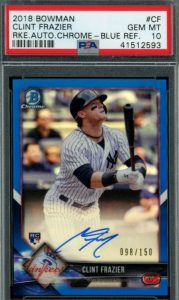 While there are plenty of prospect options, 2018 is the year where the first TRUE Clint Fraizer rookie cards started to hit the shelves. The Bowman Chrome edition from 2018 shows Fraizer in his Yankees uniform watching a fly ball that just left his bat. Looks like a warning track shot to center-right if you’re asking us! At any rate, the card will cost you far less than the 2013 version so it makes for a great addition for casual investors who don’t want to cough up $1,000 for a rare Refractor with Fraizer’s autograph. By the way, don’t get confused if you see a card from this set that shows Clint waiting for a pitch – there are two image variations. 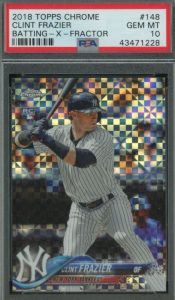 Another true rookie card, this one from the good folks at Topps. The card offers similar values as the 2018 Bowman Chrome collection so the decision between these two true rookie cards might come down to which brand you like more. That or the style. Looks-wise, this card is similar to the 2013 Bowman Chrome we opened up with – Clint may be a few years older but he’s just as locked in waiting for the pitcher to hang a curveball. 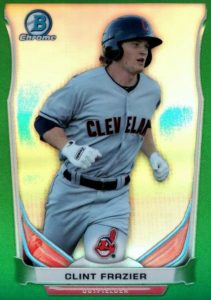 Going back to the prospect cards, this one is a far cry from the values of his first Bowman card but a great collector’s item nonetheless. Here we find a young Fraizer trotting around the basepaths after what we can only assume was a 540 foot grand slam to deep center. While the value may not be as high as the previous year’s set, we like the appeal of any early Bowman Chrome Clint Fraizer rookie card. You can add even the rarest or rare autogrpahed refractors for less than $300. Score!

Speaking of LOCKED IN young talent…

Given the way Fraizer has peformed at the Major League level whenever he’s been given a REAL chance, we can’t help but be bullish. If he keeps hitting like he always has, at some point we should expect to see him move up in the Yankees lineup and get plenty of chances to drive in plenty of runs, hit for power and average, and maybe even steal a bag or two. 7/10

As we’ve said all throughout this post, the former top prospect has pretty much DELIVERED whenever given the opportunity. Now that Clint Fraizer has the green light as an everday left fielder for the Yankees, there should be plenty of great seasons ahead. We wouldn’t be surprised if he turned in an All-Star caliber season in 2021. And if he starts trending towards one of the MLB’s elite bats over the next few years? $$$. 8/10

We’re big beleivers in his ability with the bat, but you’ve got to be a REALLY big beleiver if you’re considering more than 3 years on your Clint Fraizer rookie card investment. Let’s see if he can prove us right over the next couple of seasons before we start setting aside any long-term money. 5/10