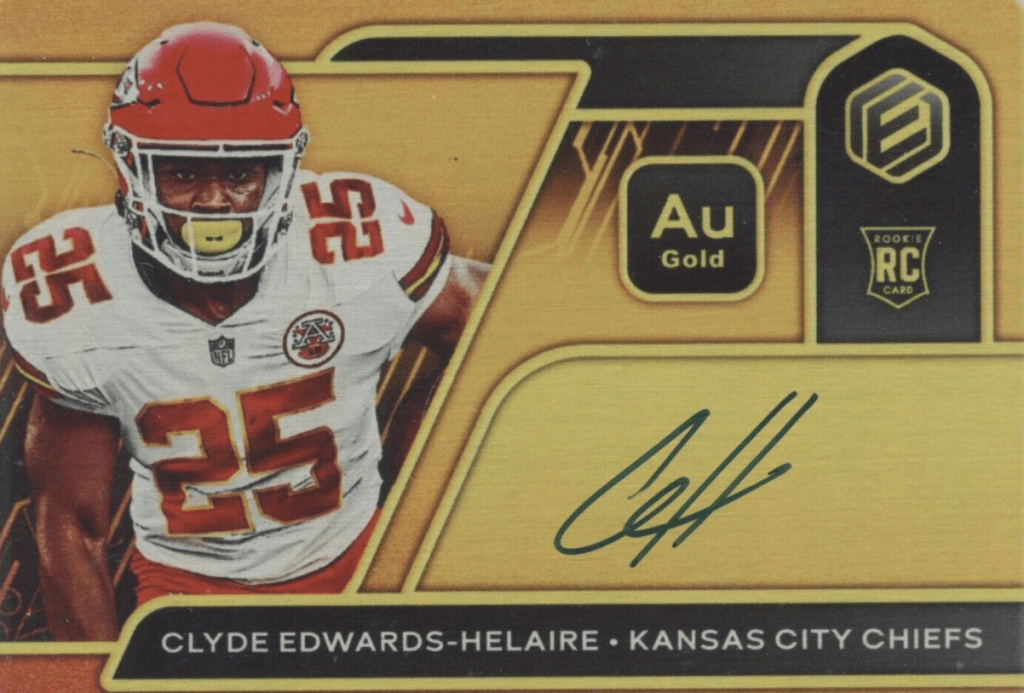 We’ve already seen glimpses of what Clyde can do given the opportunity and it’s impressive. To say the least. And with softer teams coming up on the schedule, the body of work should continue to become even more so. But some Clyde Edwards-Helaire rookie card investors may have felt their stomachs turn when they heard the news about Levonne Bell. And some fantasy football participants as well. While it’s nothing you like to see, it’s not the end of the world.

Just look at how effective Alvin Kamara was with power back Mark Ingram splitting carries. At worst, the situation for Clyde in KC is similar to what we saw with those back in New Orleans. And at best, Edwards-Helaire shows he’s still “the man” in the Chiefs backfield and forces Reid to give him the large majority of the carries. Either way, he’s not going anywhere. Especially, over the long haul. We’re about to check out some of the best Clyde Edwards-Helaire rookie card options, but first, here are some more reasons you shouldn’t let Levonne rain on your parade.

Losing Dak hurt but is now the time to buy a dip in the CeeDee Lamb rookie card market?

You probably won’t fit in a Patrick Mahomes led offense if you can’t help out with a ball caught out of the backfield every now and then.  Clyde has shown he’s capable of doing so much more often than that. So far Clyde is averaging more than 25 receiving yards per game, which is encouraging for a rookie who’s learning a new system. And going back to the college days, Edwards-Helaire proved he was more than capable of taking some heat off Heismann QB Joe Burrow by catching 55 passes for 453 yards over the course of the 2019 championship season. Clyde is just getting started and there should be VERY good days ahead in this area.

Andy Reid seems to have a way with running backs.  Just remember what he was able to get out of these guys:  Brian Westbrook, LeSean McCoy, Damien Williams, Kareem Hunt, Duce Staley, Jamaal Charles. And with the versatility Clyde Edwards-Helaire brings to the table, we can only expect the young back to get better as the season progresses.

Patrick Mahomes and the Chiefs Offense

Mahomes has already proven he can do that with or without help out of the backfield. However, now that he’s got a solid running game with both Edwards-Helaire and Bell helping to move the chains, the KC offense appears to be unstoppable. Which is good if you’re rooting for big things from Clyde.

So hopefully you’re no longer in panic mode and ready to enjoy our review on the first year Clyde cards (and hopefully you didn’t sell on impulse the minute you heard about Bell going to KC!). 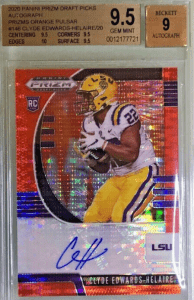 Not to be confused with the soon to be released 2020 Panini Prizm football set, this “spin-off” focuses on this year’s big-name draft picks. There’s plenty of great options to choose from in the under $500 range depending on which parallel you go with. 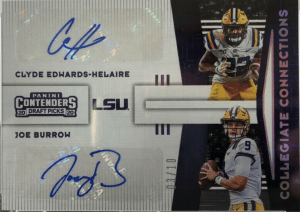 Two of the most exciting NFL rookies of 2020 on one card?  Yes PLEASE!  And seeing how both are playing at a high level in the NFL, this seems like a can’t miss. However, there are only 10 in existence so it may not pop up too often. When it does you can expect to pay over $1,500 if you’re a serious bidder. 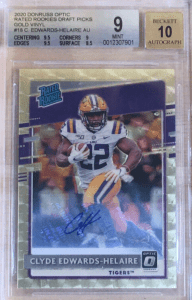 An awesome card that shows what Clyde looks like when he’s got some room to run.  The cards have been doing well with many parallels going for over $1,000 at auction. Looking to invest a little less? No problem. Plenty of good options under $500. 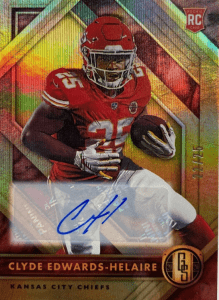 Ahh, finally a card that show’s what Clyde will look like in his Chiefs unform.  The card is draped in golden tones and shows Clyde using his great vision to find a hole against the practice squad. Overall the cards are the least expensive of the bunch we’ve looked at so far. 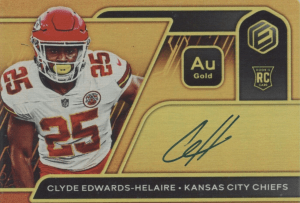 There are many different elements in this set, but we prefer the Gold edition shown above. Gotta love the periodic symbol of the element placed smack dab in the middle of the card!  Let’s not forget that photo of Clyde in his brand-spanking-new Chiefs uniform. Lots of great mid-level investment options from this set. 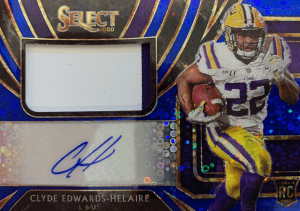 We’re seeing what this set has to offer and it’s looking pretty good. There’s plenty of mid to lower end investment options you can pick up without breaking the bank. However, it also has one of the highest-priced Clyde Edwards-Helaire rookie cards sold so far in the 1/1 Gold Vinyl. How much? More than $2,500! 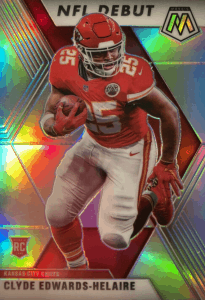 This set is making a big splash with rookies so far. And just like it’s Justin Herbert rookie card options, it’s Edwards-Helaires are command a lot of attention. The NFL Debut, Autograph, and base set parallels are all great choices for investors looking to spend big.

Here are some Joe Burrow rookie cards to think about.

As we’ve discussed, Edwards-Helaire has a high octane offense that seems tailor-made for his skill set, a head coach that has a way with running backs, and an MVP quarterback who’s going to keep that chains moving.  Don’t let the Bell signing scare you. The Chiefs will be in the playoffs once again and we’re expecting Clyde to show up in a big way. 9/10

Even with the Bell signing there’s no doubt who the future of the Chiefs backfield belongs to. Mahomes and Edwards-Helaire are set up to be running the show in the AFC for many years to come. And the more they accomplish as a team, the better it is for your investment.

We’ve said it once and will say it again. Why pass up on a great short or medium-term chance at profits. See what Clyde does over the course of the next few years before you let your mind go this direction. 3/10