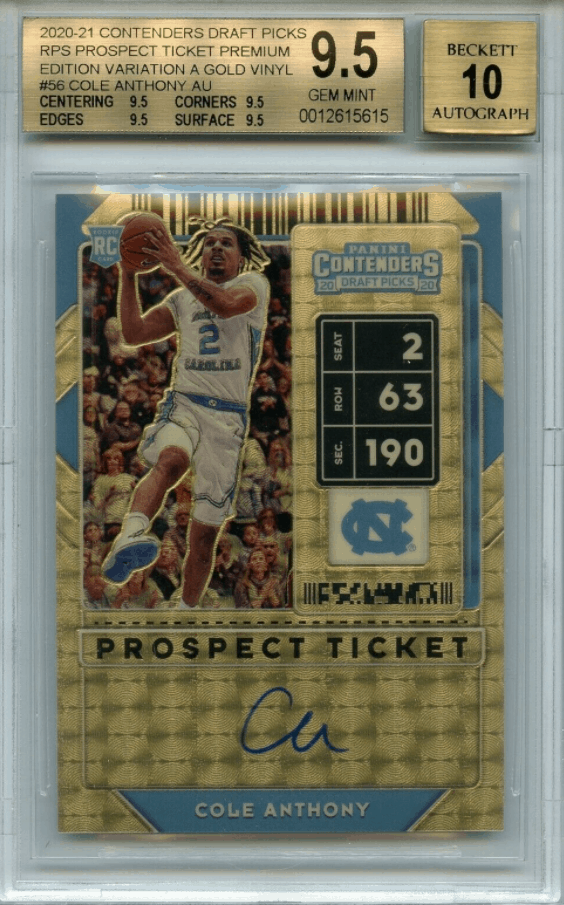 The first-round rookie point guards are holding their own so far in the young NBA season. We’ve recently explained why a Tyrese Haliburton rookie card should be on your radar so let’s turn our thoughts towards a possible Cole Anthony rookie card investment!

Just like Haliburton, Cole Anthony has held his own from the line shooting 83% on free throw attempts. However, unlike Haliburton, Anthony has struggled from the field with a success rate of just .375. While shooting isn’t where it should be, it has improved by leaps and bounds after an ice-cold start to the season that saw Anthony shoot well under the 30% mark. Even with the cold-shooting, Anthony is scoring nearly 11 points a game so he’s getting plenty of opportunities to make things happen. Once more of those shots start to fall (and they should), expect an uptick in the value of the following Cole Anthony rookie cards. 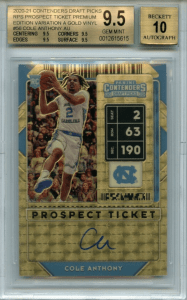 You really can’t go wrong with this set as it’s been a mainstay of the early NBA rookie card releases. The ultra-rare Gold Vinyl variations (one is shown above) command the most value, but there’s plenty of other great options. Look for one of the more common Prizms such as the “Cracked Ice” or “Blue Shimmer” if you want less skin in the game. As always an autograph is recommended! 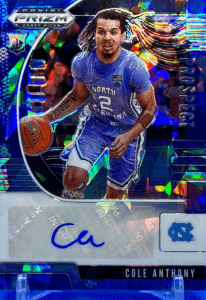 It’s hard to argue against the “Blue Cracked Ice” Prizm shown above. You should have no problem finding one as it has a print run of 75. At the same time, it’s rare enough to have a decent built-in value that should become much more than just “decent” if Anthony ends up as one of this year’s top rookies. Other great options include the “Green Pulsar” and “Purple Ice” Prizms.

The “Booklet” variations shown above is becoming a popular investment option. However, due to how rare they can be, it’s also often an expensive investment option. If you can swing it and don’t mind having your card called a “booklet”, don’t hesitate to dive in. More traditional? Opt for one of the many Patch Auto options on the regular card format. 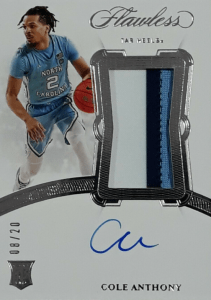 Panini Flawless Collegiate is a great option for investors who want to “test the waters” as opposed to diving in headfirst. For example, only $100 can get you a rare parallel, a signature, AND a patch. Not a bad bang for the buck combo. 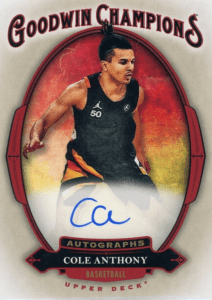 Now talk about an underrated card. A great retro-style card that any casual hobbyist can add to their collection. In addition to the retro style, the card is available with an autograph and includes a unique background behind the action shot of Anthony (who appears to be playing some STERN defense). Got $20 bucks? Grab one! 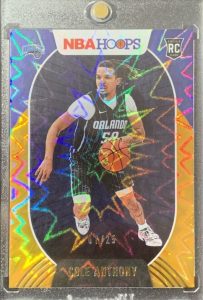 One of the first sets that shows Anthony in his new Orlando Magic uniform. As far as post-draft releases, NBA Hoops is one of the more affordable collections so you shouldn’t have to break the bank to add one of these to your collection. Plenty of rare and autographed Cole Anthony rookie cards for under $300. 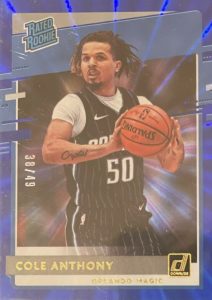 Another value play as you can scoop up a card like the rare Blue Optic above for right around $50. Or if you’re looking to spend even less than that consider the retro Jersey Kings insert for under
$20! If you’re looking to pick up multiple cards on the cheap Donruss is something to keep in mind.

Trending content: Check out the Most Valuable Basketball Cards of the 1990s!

The shots aren’t falling as often as they should be but it’s only a matter of time before they do. Once that happens we’ll start seeing some point totals from Anthony that will raise some eyebrows. Eyebrows AND the value of your Cole Anthony rookie card. And if those point totals start leading to more wins for the downtrodden Magic? Even better. 8/10

If you’re staring a nice profit in the face at the end of the year you may have a tough decision to make. Hold out for even bigger gains in the following years or take the money and put it elsewhere. Either way, that’s a good problem to have. See how the rest of the season plays out before making that decision! 7/10

3 Options We Like Better Than a Cole Anthony Rookie Card