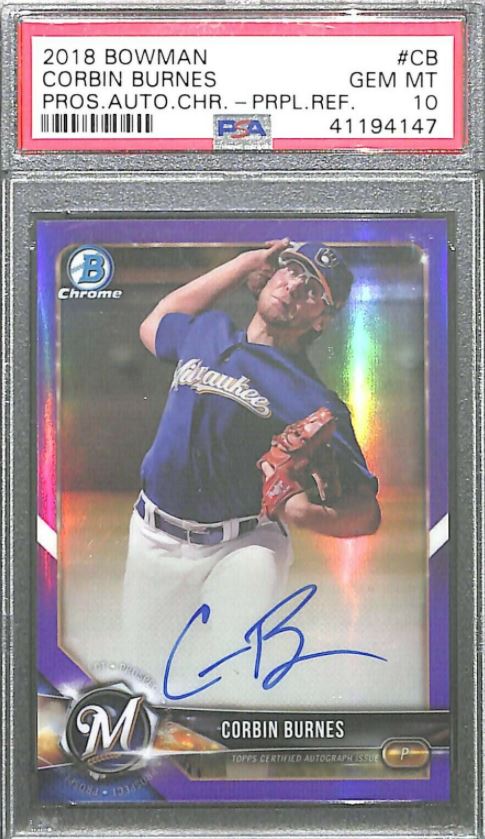 If the thought of investing in a Corbin Burnes rookie card hasn’t crossed your mind you must not be paying attention to what’s been happening so far this season. Although you may remember him as a rookie in 2019 where he posted an 8.82 ERA with a win percentage of .167, Burnes’ early 2021 performance is an entirely different story. In fact, there really hasn’t been a better pitcher so far. For instance, an ERA under four is something most MLB hurlers would be happy with. How about an ERA of under POINT four? Not to mention the fact that he hasn’t walked anyone so far and has 40 strikeouts in just over 24 innings. We rest our case. Despite these numbers, he still has a loss on his resume in 2021. Safe to say that the Brewers aren’t living up to their potential on offense, but that is a debate for another day.

So if you can get past his atrocious rookie season, you may soon notice Corbin Burnes’ rookie cards skyrocketing in both value and popularity. What better time to discuss what options are available to add to your baseball card collection?

Question of the Day: Which young pitcher has more tantalizing stuff Corbin Burnes or Dinelson Lamet? 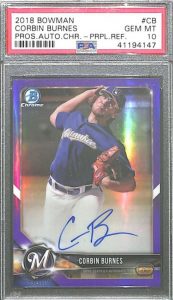 We’ll start with the lone Bowman on the list as it’s the earliest of the four options we’re presenting here as it’s from his days as a prospect. In terms of value and popularity, it also reigns supreme so if you’re looking to spend a good amount of dough you can certainly plan on starting here. Consider an autograph and rare refractor combination as they’re still incredibly affordable compared to those of some of the more established pitchers in the league. 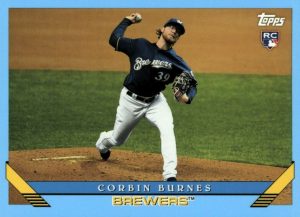 One of the things that makes this card special is its throwback design from 1993. We’ll take that over many of the common modern-day designs that you see nowadays. Additionally, the card is laid out in a horizontal format which we always enjoy. As far as value goes, this is one of the lowest hanging pieces of Corbin Burnes rookie card fruit on the list with even the rarest parallels available for less than $10. Perfect for casual collectors or folks who are looking to load up on multiple cards. 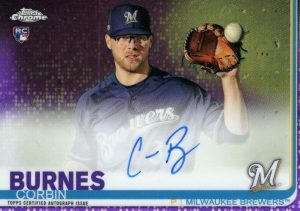 Just like the last Corbin Burnes rookie card, this one features a horizontal layout as well. However, unlike the Topps Archive, we now get a stylish modern-day design. On top of there being plenty of rare refractors to choose from, the card is available with an autograph. Something that always adds to the value of the card. While the picture on the card above is not of Burnes in action, there is also a second image variation that shows him in mid-delivery. Either way, this is the option for you if you are looking for a card with a little more flash. 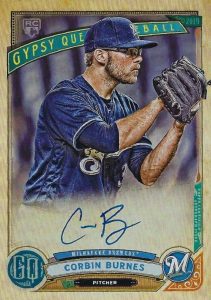 This one is the only vertical layout of the three Topps cards on our list. Another aspect that sets it apart is that it features an artistic image of the player rather than a standard photo. While this makes it look much cooler, the style isn’t the only thing this card has going for it. It’s also is available with Burnes’ autograph and comes in a variety of parallels. Both things can add to the value of your investment. Oh, and don’t forget about that lovely wood grain that harkens back to the classic 1987 set from Topps. No matter how you slice it, we highly suggest that you purchase one of these three cards before they jump up in price even more.

The way he’s pitching right now one could argue the only thing in the way of him and a Cy Young is whether or not he’ll get enough innings as he’s never thrown more than 60 in big leagues. That and Jacob deGrom. However, even if he doesn’t throw enough to justify the award, he now has a long enough resume of MLB success to be incredibly confident that the great pitching will continue for the rest of the season. Those stats we mentioned earlier don’t happen unless you have immense talent. 9/10

If you’re uncertain about the lack of innings, consider thinking a few years down the road. If Burnes stays healthy he’s primed to become one of the league’s true aces and possibly a top 3 pitcher. AL or NL. Safe to say if that happens, you’ll be glad you held onto your Corbin Burnes rookie card instead of sub coming to the temptation of short-term profits. 9.5/10

Hey, we like this guy a lot but let’s see if he lives up to what we just wrote. If he does, we’ll be sure to revisit this strategy. N/A