If you’ve been thinking about jumping into the Cristian Pache rookie card before the 2021 season begins, there are certainly FAR worse ideas. For starters, at age 22 Pache is inching closer and closer to the day he finally leaves the minor leagues behind. In fact, MLB has Pache’s ETA listed as 2021 so all expectations are that we’ll see him in a Braves uniform at some point this year. That said, you can see why owning a few of Pache’s rookie cards would be a good idea as we lead up to that event.

As far as when the call-up will take place, most expect a call-up at some point later in the year. However, Pache thinks he’s got what it takes to take the starting CF job right out of spring training. Gotta love the confidence! And while Pache may seem overly sure of himself, his progression through the minors may warrant it. He’s considered the best defensive player in the minors and the bat has started to catch up with the glove.

Over the last 2 seasons, Pache has launched 21 home runs – a vast improvement over the ZERO he hit through his first two seasons. The emerging power to go along with the strong average and decent SB potential adds to a total package that has Pache ranked as the league’s 12th prospect. And most importantly, the budding offensive ability should have you interested in picking up a couple of these Cristian Pache rookie cards!

Random thought of the day: Who will we see first in 2021, Cristian Pache or Wander Franco?

As you can see by the logo in the top right-hand corner, this is Pache’s first-ever Bowman card. That’s a pretty big deal when it comes to baseball cards nowadays. The most valuable of this collection are going to be the autographed cards. For instance, even the base auto shown above is valued at more than $500. On the other hand, a plain base card or one of the more common non-auto refractors are good ideas if you’re looking to spend less. Meanwhile, go for an autographed rare refractor like the Gold or Yellow if you’re looking to go big. 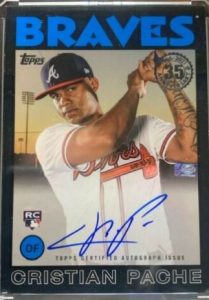 Topps excels at true rookie cards and the Series 1 set from this year shows it. Some all-around great options for Cristian Pache rookie cards in this collection including the 1986 Topps throw-back card and the Black parallel base card. 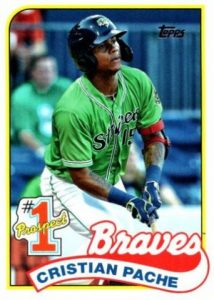 Another quality collection from Topps that harkens back to an older set. This one mimics the 1985 style and includes the famous #1 Prospect logo. The image you see above is simply the base version of the card and can be picked up for less than $5. Meanwhile, the refractors and autographs can begin approaching $500. Take a look at this collection if you want to take a break from the big price tags associated with the other two sets mentioned here.

This is our preferred strategy as we should see a nice pop in card values as we approach the call-up. If all goes according to plan with a solid season in the minors and an MLB debut we should see some nice margins when it comes time to unload. As far as timing goes, we like the idea of selling on the news of the call-up. This way you should haul in some easy profits without having to worry about the risk of big-league pitching getting the better of Pache after his debut. 8/10

If you’re thinking a medium-term investment you’re likely sold on Pache and figure his defensive skills will keep him relevant as his bat catches up. This could easily be the case but if that bat never comes around you could be staring at a card worth far less than you bought it for. There’s a nice reward down the road if Pache bat catches up to his glove but the risk is just as high. 6.5/10