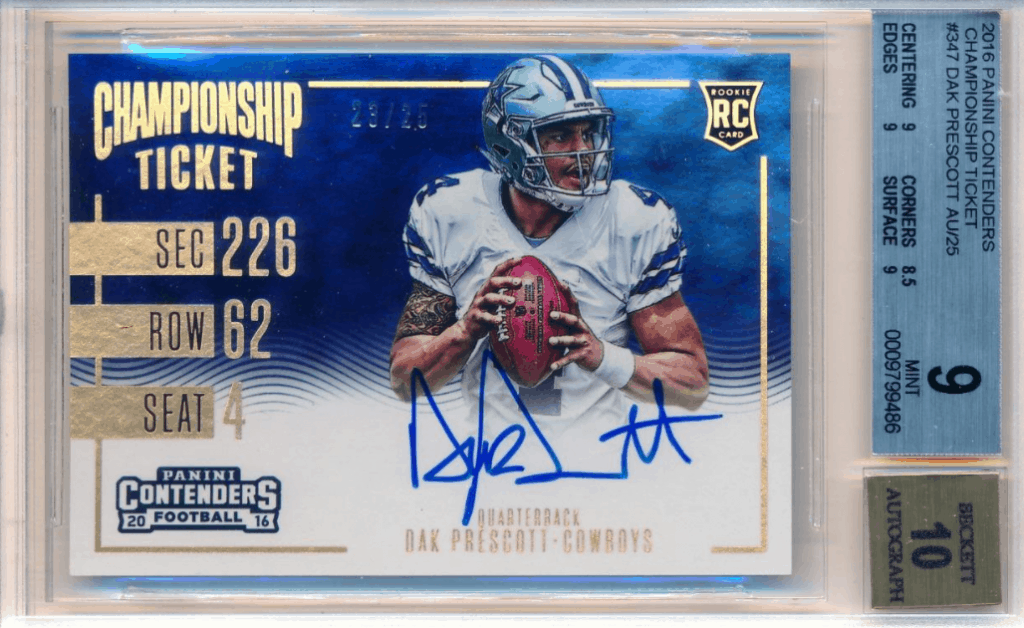 Believe it or not, NOW might be the perfect time to pick up a Dak Prescott rookie card or two. Why? As the old saying goes, buy low, sell high! And thanks to Dak’s injury, the opportunity to buy low on some of his first-year cards should be relatively easy to find. True, buying a card that features a player who isn’t even active isn’t the most exciting thing in the world. However, were not in this for the excitement, we’re in it for the RETURNS. Okay, we’re definitely in it for the excitement too, but he returns are more important!

Now, before you go rushing out to find a Dak Prescott rookie card to buy low on, you’ll need to decide whether or not you think he’s ready to take his game (and the Cowboys organization) to the next level. Let’s take a look.

Question of the day: Who will break into the NFL elite quarterback class first, Dak or Deshaun Watson?

Is Dak Prescott ready to become an elite NFL quarterback?

Dak Prescott burst onto the scene in a big way as a rookie in 2016. He led his team to a 13-3 record, made the Pro Bowl, and received plenty of praise as the league’s next big thing. However, Dak and the Cowboys were quickly ousted from the playoffs by a devastating 4th quarter comeback at the hands of Aaron Rogers and the Green Bay Packers. Perhaps this loss shook the young QB’s confidence because Dak wasn’t the same in 2017, a season where he missed the playoffs and put up the worst numbers of his career.

However, Dak rebounded from the sophomore slump in 2018 by regaining his Pro Bowl status, and more importantly, taking the Cowboys to another playoff appearance. And although he only came away with an 8-8 record last season, Dak’s year-end stat line looked like it belonged in a video game (his 4,902 passing yards were good for 2nd in the league).

That brings us to this year. If you think Dak’s 2019 passing yards were impressive, take a look at what he did this year. In less than 5 total games Prescott but up 1,856 yards through the air. While you probably don’t feel like crunching the numbers to see what could have been before the injury know this: Dak was on pace to beat Peyton Mannings record of 5,477 for the most of ALL TIME in a season.

So in a very roundabout way, there’s your answer. YES! Dak is absolutely ready to become an elite QB. That said, here are some of his best rookie cards! 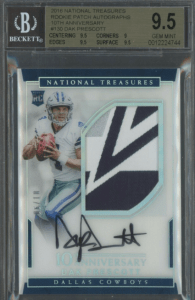 There’s no shortage of high-end Dak Prescott rookie cards options from National Treasure. No surprises there. In fact, the Rookie Patch Autographs 6/10 went for over $10,000 on eBay before the season started. We’re not seeing a whole lot of this selling after the injury (especially the more valuable ones), but if you do come across one it could be at a discount! 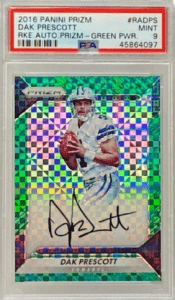 A remarkable card that shows Dak standing tall in the pocket. These can become expensive very quickly depending on the type of prizm. If you’re looking to spend some BIG money, seek out the elusive Gold Vinyl! More reserved? Look for a nice non-auto of the base version of one of the more common prizms. 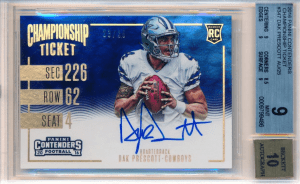 Plenty of great options from this set. In addition to the Championship Ticket shown above, there are also the well-known Rookie Ticket options. Both are popular and attract plenty of interest from investors so it’s just a matter of finding one you like at a price you like even more. 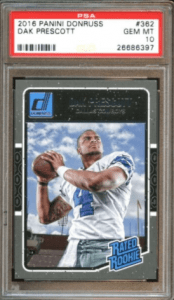 A card featuring the classic Donruss “Rated Rookie” logo in the bottom right corner. On top of that, you get a helmetless Dak with a look that seems to say “Yea, I know I’m gonna win Rookie of the Year. No big deal”. 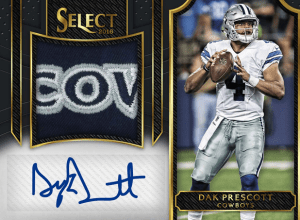 Here you can choose between an autograph, a “prizm”, and a patch. Decisions, decisions. We personally like all three! But you know what they say, beauty is in the eye of the beholder. 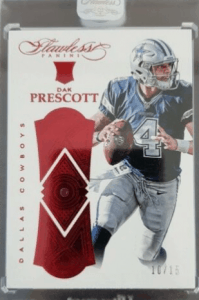 A set that includes almost a countless number of great options that are incredibly affordable. Look to Panini Flawless if you’re not yet completely sold on Dak’s ability to take the next step. Or better yet the Cowboy’s defenses ability to help him take that next step!

Dak may be done for 2020 but the rookie QB in Cincinnati is just getting started. Check out these Joe Burrow rookie card options!

At the time of this writing, we’re halfway through the NFL season. Which means a short term approach would leave out any kind of playoff charge Dak and the Cowboys might make in 2021. Therefore, we prefer a medium-term approach. However, if Dak starts hot in 2021 you should be able to make some decent gains. 7/10

We can’t help but like Dak’s chances of reaching a new level (as in the TOP level) under new coach Mike McCarthy (if he’s not prematurely ousted).  And maybe, just maybe, he will take the Cowboy’s back to the promised land and bring a Superbowl back to Dallas in the next few years. And while he won’t be the 2020 NFL MVP, he’ll have the opportunity to contend for this honor for years to come. If any of these things happen you should see an EXPLOSION in the value of your Dak Prescott rookie card collection. 9/10

While we certainly love the potential, Dak has not proven himself enough for us to be sold on a long term approach. However, if he accomplishes the things we just talked about in the following years you’ll have a decision to make: sell for big medium-term profits or hold out for even bigger gains in the long run. Not a bad problem to have. 7/10

Look for bargains on these tending QBs!