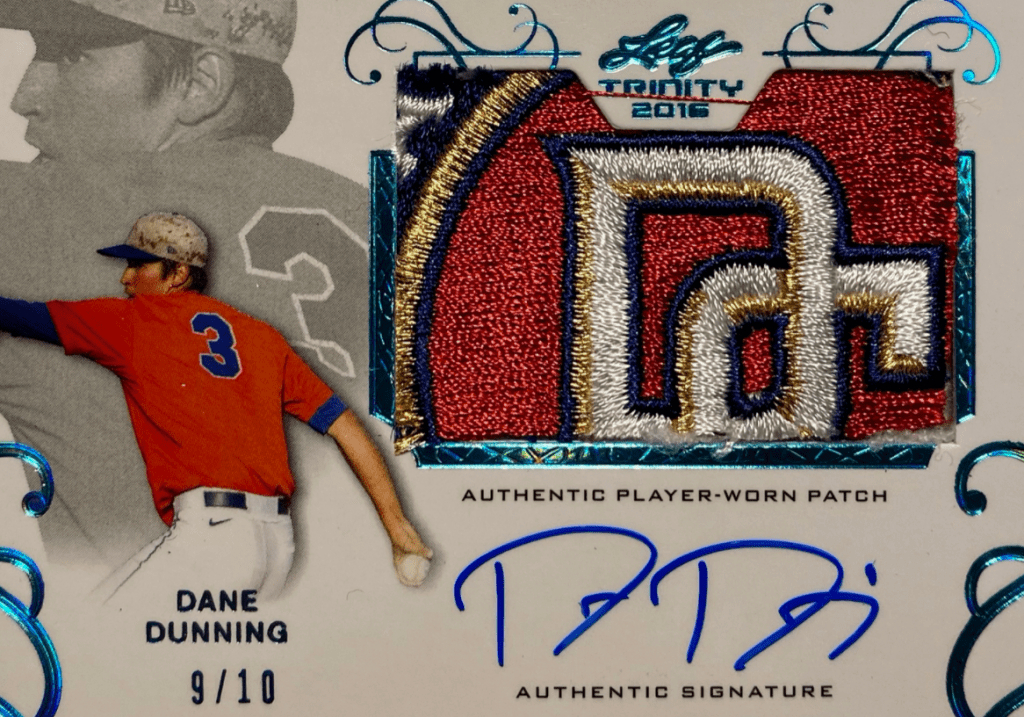 Yesterday we covered Casey Mize rookie cards, so it’s only fitting that we switch gears to the OTHER guy that debuted in last night’s matchup.  Yep, it’s time to take a look at what Dane Dunning rookie card options are out there.  But first, let’s find out why so many seem to be suddenly hopping on the Dane Dunning train.  Sure he performed well last night (for a debut), but there’s got to be more to the story!

Dane Dunning was one of those guys who was drafted twice.  The first time was in 2013 when the Blue Jays drafted him in the 34th round.  Apparently he didn’t like where he went in the draft because he was soon on his way to Florida where he’d end up pitching for the Gators for the next 3 seasons.  And pitch he did.  During that time Dunning racked up 163 innings worth of experience and came away with a crisp 3.26 ERA.  Not to mention a solid 174 K’s.

Then in 2016 came his second crack at the MLB Draft.  And this time he got a satisfactory position.  After being taken by the Nationals in the first round (29th overall), Dane Dunning soon began dealing against minor league batters.  And truth be told, those bats never really presented a problem for him.  Unless you call a 3.51 ERA over a 115 inning stretch in the Carolina League a problem.  By the time Dunning was called up to make his debut, he had put 266 innings of minor league experience on his arm and came out of it with a clean 2.74 ERA and 300 K’s.

Based on his college and NCAA track record, Dunning seems to get better as the competition gets tougher.  That bodes incredibly well for his chances of making it in the big leagues.  It also bodes well for those who decide to take a chance on a Dane Dunning rookie card!  Here are a few to consider. 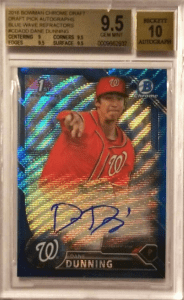 Ah but of course.  Did you expect to see another set rank as the best option for a baseball pre-debut rookie card?  As you can see this one was made while Dunning was still on the Nats.  And apparently, before he went into “Rick Vaughn” mode with those dark-rimmed glasses! 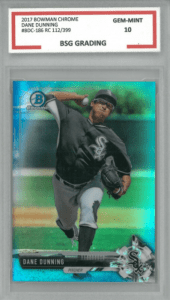 That’s more like it.  What a difference a year makes.  Dane Dunning suddenly transforms from a timid looking glasses-less lad to a stone-cold strikeout machine.  Those Ricky Vaughn glasses go great with that fresh White Sox uniform.  While this one isn’t as valuable, it sure looks a lot better. 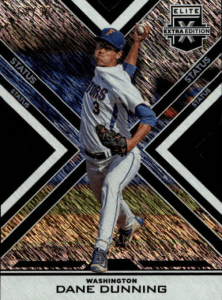 This one takes it way back to those Flordia Gator days.  The card is incredibly affordable and appears to be an easy buy-low opportunity. 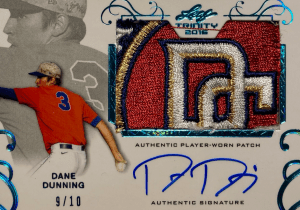 There are many different Dane Dunning rookie card variations in this set.  And as Leaf has become known for, there’s a lot packed into them.  We personally like the horizontal card with a patch and an autograph. 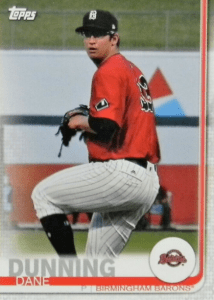 How do you make a pro-debut card the year before it even happens?  Regardless of whether Topps jumped the gun, this card is a fine collector’s item captured during Dunning’s days with the Birmingham Barons.  It won’t set you back a whole lot either!

Another product of that talented White Sox farm system….

Just like the pitcher himself, the Dane Dunning rookie card market is loaded with potential.  He’s a first-round draft pick who’s performed at every stop on his collegiate and pro career.  And guess what?  You won’t have to pay through the nose to get his highest end rookie cards.

He may not have the prospect stature as the guy he faced last night (only the second time 2 first-round picks have debuted against each other by the way), but he appears every bit as ready to take on MLB pitching.  And if he ends up outperforming Casey Mize this year?  The massive value gap in those rookie card markets will quickly narrow.