Daniel Jones is about to begin what is sure to be an exciting follow up to his rookie campaign.  So now may be a good time to get in on the Daniel Jones rookie card market.  BEFORE he does something crazy like putting up 400 yards with 4 TDs and drives values through the roof.  Hey, it could happen!  Just look at what a superb season debut did for the value of Clyde Edwards-Helaire.  So let’s take a minute to go through some of the best options.  We’ll try to incorporate cards from all ends of the value spectrum starting with the highest value first.  Let’s go!

Here’s a 2nd year QB that didn’t disappoint in his debut….check out these Kyler Murray rookie cards! 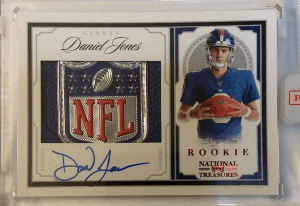 This is the set you want to look out if you’re looking to empty the war chest.  There are all kinds of versions so we’re not gonna single out a specific one.  Of course, the value of each depends mostly on rarity but there are many variations that command a price of well over $3k.  And that’s only for an ungraded card.  Get one back from Beckett Grading Services with a 9 or higher on the front and WATCH OUT! 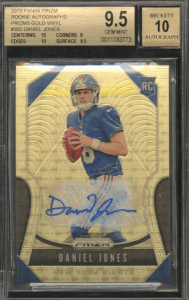 The Gold Vinyl is the one to grab if you’re looking to go big as there’s only 5 of them in existence.  Want one in mint condition?  Be sure to have well over $3k ready to invest!  But hey, come season’s end the guy trying to buy it from you could be investing much more than that.  Not looking to break out the big bucks?  Try for the regular Gold version (there are twice as many of these so they’re quite a bit cheaper). 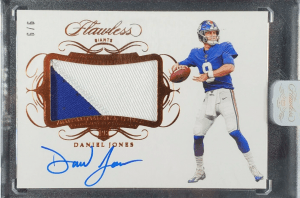 This is a great set for a more moderately inclined Daniel Jones rookie card investor.  For instance, some of the harder to find cards can still be had for well under $1,000 ungraded.  Even the rarest of rare Nike Swoosh Autograph shown above will cost you far less than some of those Nationa Treasures we talked about earlier! 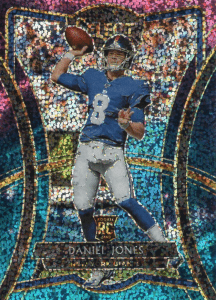 Whether you go with the 2018 or 2019 set, you’re gonna get a card that’s capable of grabbing some attention.  It’s also very affordable with many of the rarer parrels going for less than $500.  We personally like the 2019 Cosmic Premier the most.  Talk about some eye candy for the ole’ display case! 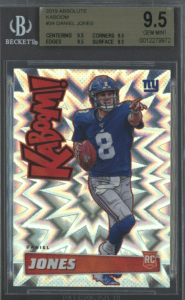 KABOOOOOOOM!  They could put a photo of Steve Urkel on this card and it’d still be one of the baddest on the block.  And for a card with so much swag, it’s incredibly affordable.

When you ask yourself whether or not you want to drop a few dollars (or a few thousand dollars in some cases) on a card you should always start by considering how long you want to hold onto it.  That said, there are some things to consider whether you are in the Daniel Jones rookie card market for the short term, medium term, or the long haul.

This may be the riskiest of all 3 strategies.  For instance, Daniel Jones had a decent rookie season but it only amounted to a 3-9 record.  On top of that, he was a bit of a turnover machine.  Especially when it came to fumbles.  What we’re trying to say is he’s far from a sure thing.  There’s a good chance he’ll build upon his rookie season and make you some profits by season’s end.  But there’s also a decent chance he takes a step back and leaves you selling a loss.  Proceed with caution!

In the case of Daniel Jones, we like this strategy the best.  He’s got some pretty good surrounding talent on offense (especially in the backfield) and a new head coach who is used to winning.  So while we wouldn’t be surprised to see a rough sophomore campaign, we WOULD be surprised if he and the Giants didn’t get their act together shortly after.  Too much talent.

Thinking long term on a player who’s yet to prove himself is always a gamble.  On top of that, you’ll need to consider what the card market as a whole may do.  However, we tend to think both the player and the market will be healthy and productive for many years to come.  If you miss on a short or medium-term play don’t be afraid to hold.

Made up your mind?  Find your Daniel Jones rookie card bargain on eBay!