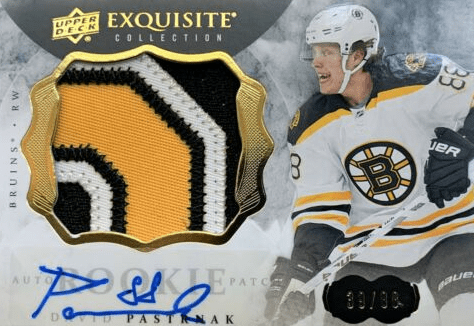 Thinking about picking up a David Pastrnak rookie card now that the 2021 season is underway? Seems like a good idea. Even with that hip surgery, he’s back and scoring goals. Just like we thought he would be! In fact, his goal-scoring ability leads many to believe there will be a 60 goal season for Pastrnak sometime in the future. And that is just only part of the reason you should be considering an investment in one of his first-year cards.

For starters, he was the league’s top goal scorer last season at only the age of 23. Secondly, the Bruins are once again ranked in the top 5 for odds to win the Stanley Cup. Having the rookie card of the league’s best scorer on the league’s best team would be pretty nice, ya? If you agree, you may want to check out the Davis Pastrnak rookie card options below. But first, let’s find out more about this young phenom.

David Pastrnak was drafted 25th overall by the Bruins in the 2014 NHL draft and was soon seeing fairly regular playing time. While not the goalie eater we see today, Pastrnak was no slouch in his early years in the NHL. He averaged 12.5 goals over his first two seasons, which isn’t bad considering he only averaged 677 minutes on ice during the same time frame.

But it wasn’t until his 3rd season in the league that David Pastrnak started to become the goalscorer we see today. He scored 34 that year and followed that up with 35 in 2017, 38 in 2018, and had 48 last season (tied with Ovechkin for the lead league). If this trend holds, we can expect more goals in David Pastrnak’s bright future. MUCH more. And what better reason to collect a hockey player’s cards than by the number of lamps he’s able to light.

As you can see, when it comes to career trajectory, Pastrnak just keeps getting better and better. The guy’s a goal-scoring machine with a flair for the dramatics (he led the league last year in game-winning goals). And where there’s drama there’s commotion. Where there’s commotion there’s demand. And where there’s demand there’s you. And hopefully, that version of yourself is sitting there with one of these David Pastrnak rookie cards in your collection in the VERY near future!

Random thought of the day: Will David Pastrnak ever reach the level of goal-scoring of the legendary Golden Brett?? 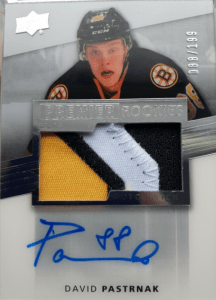 In the world of Hockey cards, it sure is hard to beat an Upper Deck. This particular card is a rare find and includes Pastrnak’s signature along with a piece of his jersey. Although it’s hard to tell what David’s actually doing on the card, we’ll assume he’s about to put one in the back of the net.

When it comes to how much you’ll need to spend it varies depending on which card you’re wanting to pick up. For instance, the card you see above has a print run of 199 and sells for somewhere between $300 and $400. Meanwhile, there ten Gold parallels of this card floating around out there that are valued at MUCH more than that. Either way, this is one of the best sets for a David Pastrnak rookie card and regardless of which variation you choose, you should be in great shape. 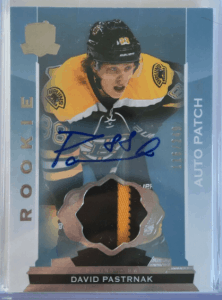 Another beauty from Upper Deck that features what appears to be a patient Pastrnak waiting for the puck to drop. Just like the Premier Gold from Upper Deck, this one includes an autograph and a piece of Pastrnak’s jersey. As far as value goes you’ll need to buck up if you want to get your hands on one of these. Even though there’s a decent amount out there (print run of 249) they’re going for somewhere between $700 and $1,000. And that’s without a grade. Big investors welcome. 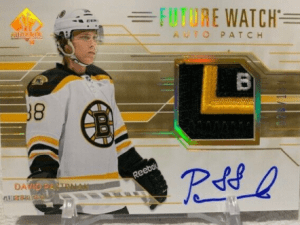 There are two main David Pastrnak rookie cards to target here. Both cards are pretty sick, to be honest. If you like a patch of jersey plastered to your card grab the horizontal one. However, if you just want a crisp, clean card without a lot of frills, the vertical layout is what you need. 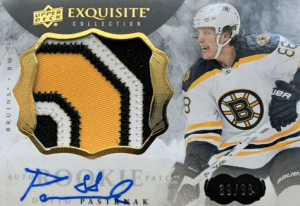 Surprise surprise, it’s Upper Deck again. This time the hockey card industry behemoth is coming at you with a much fancier title than the previous two we mentioned. The Exquisite (kinda makes you feel like you’re at a wine tasting event) features a horizontal layout and can include both a patch of jersey and an autograph. As always, prices vary but you should find plenty of cards that’ll fall right within the wheelhouse of that moderate-minded investor. 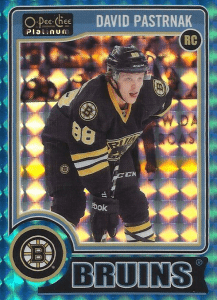 There’s nothing like a classic-looking hockey card. If you agree with this sentiment, the O-Pee-Chee Platinum is the David Pastrnak rookie card for you. As far as value goes, a lot has to do with the frills so look for one that really pops! Pssst, the Seismic Gold looks awfully good to us. 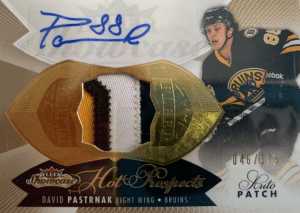 There are some great David Pastrnak rookie card options in that $50 to $100 price range in this set. Higher-end options include the Green PMG and the Flair Showcase variations. Regardless of which card you end up with it’ll hold its own as long as Pastrnak does. The latter seems a certainty so draw your conclusions from that!

Hockey not your bag? Perhaps these Yordan Alvarez rookie cards are more up your alley!

The doubt created by the hip surgery combined with the natural decline in the market during the offseason might create a great opportunity to buy low on a David Pastrnak rookie card. Apparently, his rehab is going well which gives us reason to be plenty optimistic about his chances at finding the form that made him one of the league’s best scorers. Even if he misses some time at the start of the 2021 season, a strong finish should be all you need to enter the city limits of Profitsville. 9/10

We like this strategy better than a short-term play. There’s enough evidence out there indicating Pastrnak is positioned to be one of the most exciting players in the league for a long time to come. And given his age, we can expect his prime seasons to begin within the next 5 seasons. And when those seasons come, we expect to see some scoring titles. Not to mention Stanley Cup titles. 9.5/10

Just like Patrick Mahomes, Pastrnak is one of the few young talents we feel confident enough to go long term on. He’s already established himself as arguably the best goal scorer in the league and he hasn’t even hit his prime. On top of that, he’s on a great team that’s capable of going all the way pretty much any season. Even if he gets traded, it shouldn’t be long before Pastrnak elevates his new team to the next level. 9/10

Most Valuable Hockey Cards From the 80s