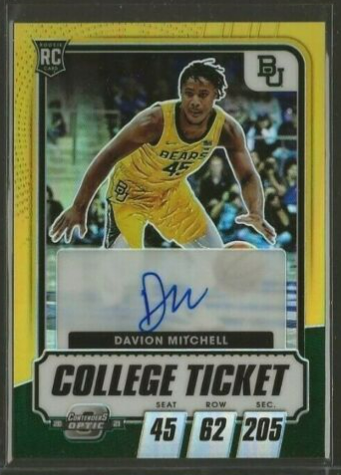 While it’s still incredibly early, Davion Mitchell rookie card owners have to be thrilled about what the kid has done so far in his short NBA career. Over just a handful of preseason games, Mitchell has already put the league on notice. Or more like a stern warning that he’ll be a force to be reckoned with within the 2021-22 NBA rookie class. Not only has he played solid defense, but Mitchell also tallied 22 points over 32 minutes in a late October game against the Warriors. A performance good enough to catch the eye of future Hall of Famer Steph Curry.

But with being a first round pick in the 2021 NBA draft, this kind of high level play comes as no shocker. In his final season at Baylor, Mitchell was the catalyst for one of the best teams in NCCAB. He averaged more than 5 assists per game, played solid defense, and had no problem draining a shot when needed. Something that is made evident when you take a gander at his .511 field goal percentage from the 2020-21 season. 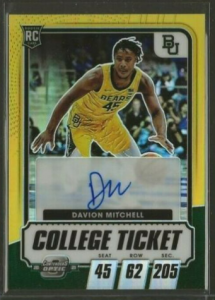 The above card is a rare and valuable gold prizm auto from the upcoming Panini Contenders collection. In addition to Contenders, you can also find other Panini brands like Mosaic, Donruss, Certified, and many more. Right now this is where you should focus if you want the cream of the crop in the early market. While there may be some more valuable collections arriving in the upcoming months, Chronicles allows you to get in on some high end cards early on. Something that can be quite valuable if you’re hoping to get in before the hype. Pricing vary but the more valuable cards can be worth hundreds while there are some more affordable ones for well under $50. 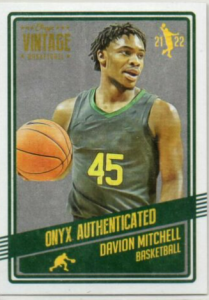 A must-consider alternative to Panini Chronicles. Onyx delivers a retro-inspired card that carries that classic old school vibe that many collectors covet. In addition to the perfectly understated looks, Onyx also delivers a collection of Davion Mitchell rookie card options that are suitable for casual hobbyists. Even the autographed versions can be had for less than $100. 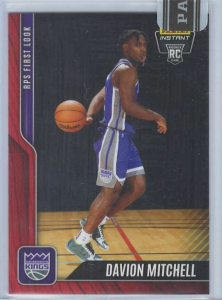 The collector’s who are concerned about getting in as early as possible turn to Panini Instant to satisfy their NBA rookie card needs. Not only do they deliver on that draft day hype, but the set also features cards of the upcoming rookies in their new team gear! Check out that card above showing Mitchell making a silky smooth behind the back pass in his brand Kings uniform. Likely an image we’ll see plenty of over the next few years. At any rate, a solid option with many cards available for under $50.

We like what we’re seeing so far and it would be no surprise to see Mitchell finish strong in the 2021-22 NBA Rookie of the Year standings. Just like new teammate Tyrese Haliburton did last season. Watch his play (and playing time) closely, but it’s hard to believe there isn’t green to be made in the short term. Especially if you buy before the season begins.

We like where Haliburton and Mitchell are capable of taking the Kings over the next few years. The individual success should be there. However,  if the Kings show up as a contender, things could REALLY pop. If you’re not like what you’re seeing in the value of your Davion Mitchell rookie card after year one, don’t hesitate to push the investment down the road a couple of years if need be.