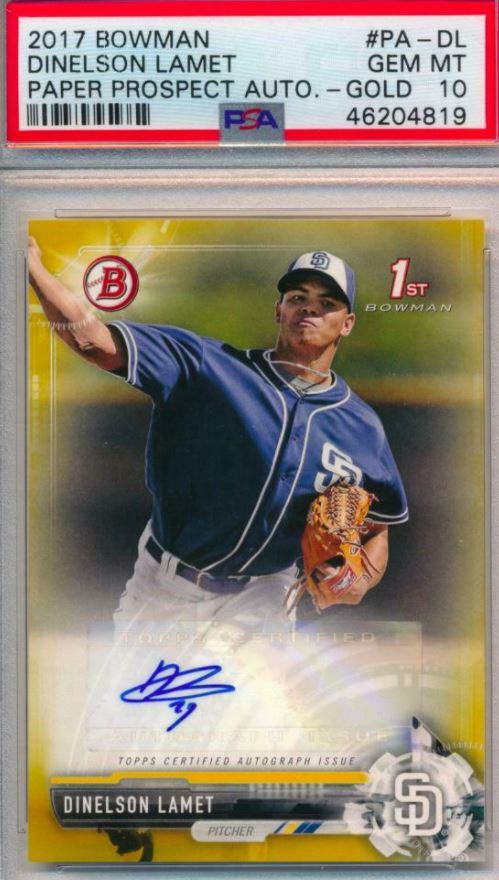 If you haven’t considered picking up a Dinelson Lamet yet, you might want to entertain that notion. As you may already know, the San Diego Padres are now one of the top teams in the league with many young stars. And while not as well known as someone like Fernando Tatis Jr., Dinelson Lamet is one that has the chance to shine just as bright. Lamet made his debut a recently as 2017 so he only has few years of experience under his belt. However, that arm is loaded with potential and we’re starting to see some major progress.

Although Lamet has had some arm problems his stuff is nothing short of ELECTRIC when he’s at full health. And despite the recent forearm injury, the tantalizing talent that he’s shown since he posted a 2.09 ERA in 2020 (not to mention that ridiculous 12.1 k per 9 rate) makes us think he’ll be a bonafide ace in the years to come. If not this year. Therefore it may be a good idea to grab a  Dinelson Lamet rookie card or two before that happens. Here are a few we LOVE!

Here are a few Shane Bieber rookie cards to consider!

2017 Bowman Chrome (Get Your Bargain on eBay) 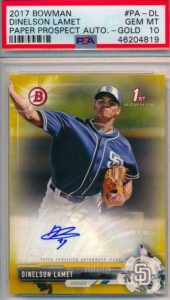 Lamet’s first-ever Bowman is the go-to card on this list. And at less than $300 for some of the rarest Refractors, you’ll be getting a true bargain if his career trajectory goes the way we suspect over the next few seasons. In addition to being the most valuable, it’s also arguably the most head-turning. Both photo variations show Lamet in mid wind up ready to bring the heat. Or perhaps he’s getting ready to embarrass someone with his wipeout slider. Either way, you can’t go wrong regardless of which Dinelson Lamet rookie card you end up buying from this set. 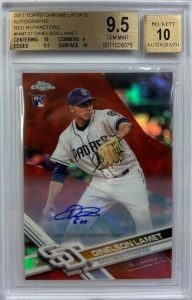 This card sits at the top of our list for its rare and unusual color scheme. Not to mention its incredibly short print of just 25 cards. As you can tell by the name, Red Refractor scheme is what makes the card grab your attention. That and Lamet’s autograph. While the format of the card is pretty much standard, the red gleam and the rarity will certainly attract plenty of buyers when it’s time to sell for those nice profits. No matter how you look at it, this card is top-notch and a winner on all levels. Oh, and you can grab it for less than $300. All-day! 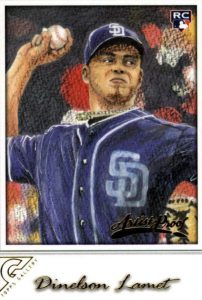 Next, we have a different 2017 Topps card. This one from the more affordable Gallery collection. Just like the previous card, this one is also available with an autograph. But what really makes this Dinelson Lamet rookie card special is its artsy design (hence the “gallery” name). Bottom line you really can’t go wrong with this card. 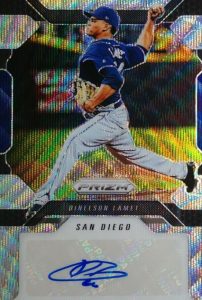 The final card on this list is unique in its own right since it is one of the rare times we feature a Panini baseball card. While famous for its dominance over the football and basketball card industry, Panini can’t hold a candle to Topps or Bowman when it comes to baseball. However, we love this card for its unique look and uncompromising style that the Panini brand is known for. But perhaps more importantly, the bang for your buck factor. Grab a rare Prizm with an autograph and you’re spending well less than $100. Or even less than $10 in the case of the Blue Prizm shown above. Why not load up on 4 or 5 of them? And that is o e question we have ZERO answers for.

2021 MLB Debut Alert: Check out our Mackenzie Gore Rookie card hot list and get in on the action BEFORE he’s called up to the big leagues!

A lot will depend on Lamet’s health if you’re planning on a short-term play so there’s a decent amount of risk if you’re not prepared to see your investment through for a few years. However, if the budding ace ends up turning in a healthy season there’s an amazing chance you’ll be raking in some BIG BOY profits. 7/10

We like this approach best as it not only gives you time to get past Lamet’s injury woes but also gives him time to mature as a pitcher. If he can consistently harness the ability he flashed in the shortened 2020 season he’ll likely have a Cy Young to his name at some point in this time frame. Hey, DeGrom can’t win em’ all! 9/10

While we certainly think Lamet has the potential to be one of the truly elite pitchers for many years to come, thinking long at this point doesn’t make much sense. Let’s see him stay healthy and pitch to his ability over the next few years before we start thinking about stashing a couple away. No reason to commit to tying up any more of your bankroll than you have to at this point. 5/10