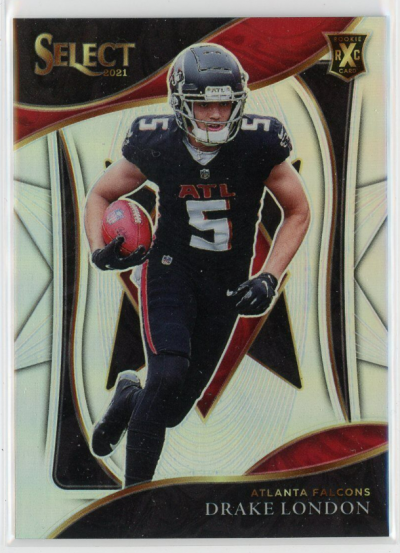 As the first offensive weapon off the board in the 2022 NFL Draft, there’s no doubt the Atlanta Falcons have high expectations for Drake London. That said, few would say those expectations haven’t been met so far. While his quick adaption to life in the NFL may be a bit of a surprise to some, his college performance says otherwise.

London is a physical receiver that had no problem making big plays throughout his time at USC. Especially in his senior season where he hauled in 88 catches for 1,084 yards and 7 touch downs. Numbers that are even more impressive once you consider the fact that the kid only played in 8 games that year. Wow. And with a team known for airing the ball out as his NFL employer, London appears poised to bring that kind of production to the NFL. Needless to say, the following cards should see some brilliant appreciation if so. 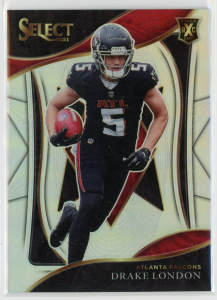 So far this is without a doubt the BEST Drake London rookie card on the market. An early roll out of the rookie lineup for the 2022 Panini Select collection, XRC offers some amazing options for collectors who don’t feel like waiting for the set’s arrival. If you want to spend a good chunk of change hone in on one of the autographed versions of the card. Meanwhile, the Silver Prizm shown above is a great pick up for casual to moderate collectors. 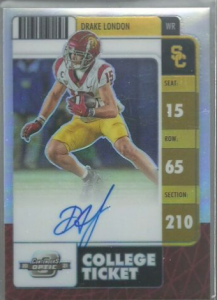 Panini Chronicles is a fan favorite due to it’s wide array of Panini Brands offered within the set. So if  you’re looking for a sneak peak of upcoming sets from Prizm, Select, Donruss, and Mosaic make sure to to check out this collection. As you can see from the Panini Contenders card above, Chronicles includes some amazing autographed Drake London rookie cards. Additionally, the set is loaded with cool inserts and rare Prizms. 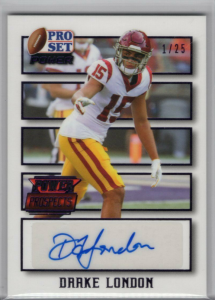 Leaf got the jump on all of the other football card brands when it comes Drake London rookie cards. The brand’s Pro Set line is the most sought after brand Leaf offers and features London lining up wide and waiting for the snap. As you can see from the photo shown above, the card comes available with the wideout’s autograph. Additionally, there are different parallels of varying rarity. Both are great options if you’re looking to spend more than just a few bucks. Even so, some ink and a number on the front won’t cost you all too much as Leaf is known for producing a low cost card that appeals to casual collectors. 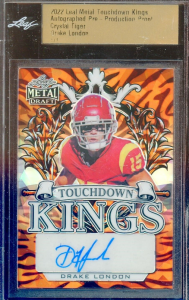 As far as Leaf goes, the Metal collections stands out as one of the most valuable sets the brand offers. Not to mention one of the coolest. Just take a gander at the Touchdown Kings insert shown here. The in your face design rivals that of some of the better known inserts such as Donruss’s Downtown and Panini’s Color Blast. Easily the best Drake London rookie cards made by Leaf. 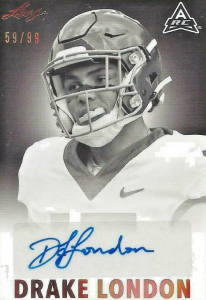 In addition to Pro Set, Leaf also features Drake London in it’s Memories collection. Judging by the card above, whatever play happened shortly before the photo was snapped is a memory he’d like to forget! At any rate, Memories also offers London’s autograph as well as a variety of parallels. On top of that, the base card from the set is also available in both features. Whatever you chose, you can be sure that no card from this collection will break the bank. Just like Pro Set, this is a option for anyone who doesn’t want to spend load of cash on their Drake London rookie card investment. 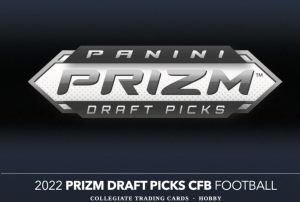 The first collection from Panini to feature the top rookies from the 2022 NFL Draft will be out soon. Once it arrives, the Drake London cards featured in the set will go straight to the top of this list. As always, this sought after collection will be filled to the brim with plenty of cool inserts, autographs, and Prizm varieties. On top of that, we’ll see some higher priced cards that make for more appropriate buys for anyone who is incredibly bullish on what London can do in Atlanta’s high flying offense.