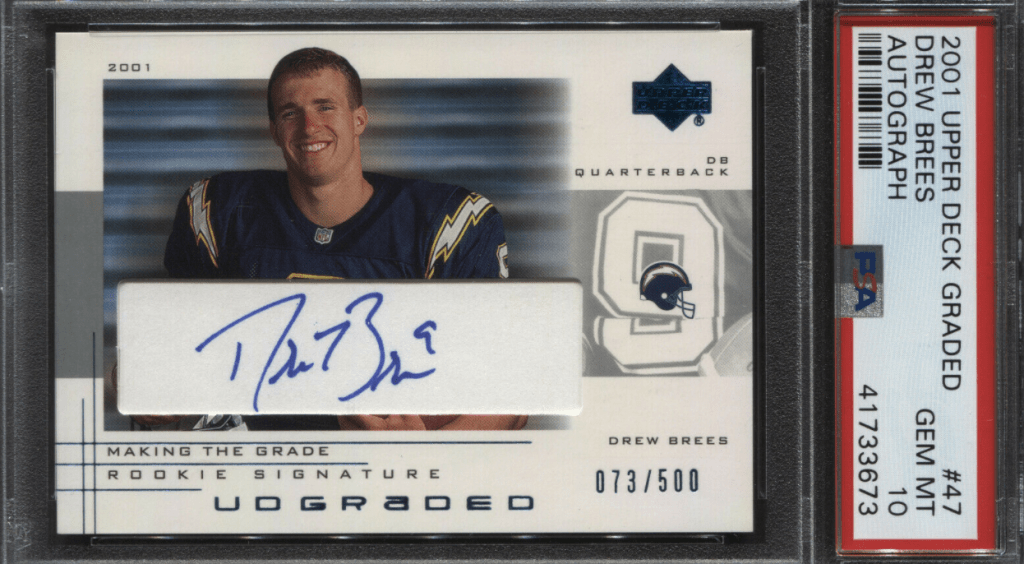 Since yet another season has come and gone, it’s time for a review of the Drew Brees rookie card market!

There’s no doubt that when it’s all said and done, Brees will go down as one of the best to ever play the game. In fact, with his NFL records for most passing yards and passing TDs EVER, many will argue he isn’t one of the greatest, but the greatest to ever play. In addition to the yards and TDs, Brees also holds the record for best completion percentage for both a career AND season along with various others. But there are a few things missing from the resume.

With everything Brees has accomplished it’s mind-boggling to think he hasn’t secured an MVP in his career. And with the tough competition this year, that trend is likely to continue. However, maybe there still hope for next year since Brees still hasn’t announced his retirment!

But you know what ELSE is missing?? Multiple Super Bowl championships. Even though he’s got Tom Brady beat on individual achievements, most will argue that Brady, not Brees, is the greatest of all time. The difference-maker? About 5 Super Bowl rings.  Fair or not, that’s just the way it goes. And you can see evidence of that when comparing the Tom Brady rookie card market against the Drew Brees rookie card market. Tom’s cards are much more valuable.

In 2020, Drew Brees was, well, Drew Brees. Brees once again showed he was more than capable of leading the Saints on a playoff run. If he somehow manages to back out of that retirment talk we’d expect him to take one last stab at it next year.

This young QB is already putting up Brees-like numbers in just his first season. Seems like a great reason to check out these Justin Herbert rookie cards! 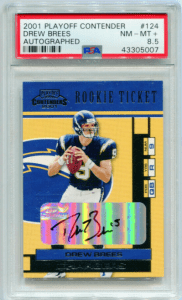 When it comes to Brees’ rookie cards, there are two heavy hitters. And this is one is the heavier of the two (we’ll get to the other one next!). It’s a great looking card that really comes to life with those old Charger uniform colors. You can get it with or without an autograph. 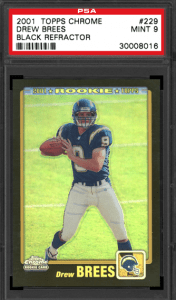 And here’s the other of the two heavy hitters. Unlike the card we just mentioned, the 2001 Topps Chrome isn’t available with an autograph (at least not fresh out the pack). However, it makes up for it with the refractor versions. Either way, this card is incredibly sought after. 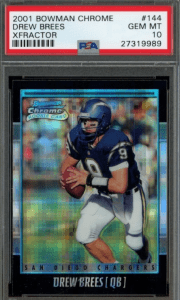 While not as valuable as the Topps Chrome, this one still commands quite a bit of attention. Variations (or in this case upgrades) include the Xfractor and refractor styles. No matter which way you go, you’ll have a card worth owning (and worth selling when the time is right!). 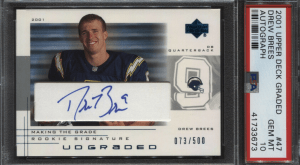 Not nearly as valuable as the cards we’ve seen so far, but a great card in its own right. This one comes in a variety of styles but we prefer the one with Drew Brees smiling on a horizontal layout.  Look for an autograph if you want to boost up the value! 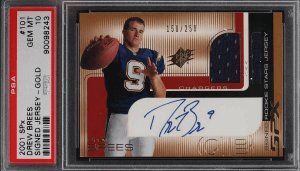 This one features a confident, almost smug-looking Drew Brees menacing holding out the ball as if to say “come take it”. The card comes with Drew’s autograph and includes an authentic piece of the jersey he wore in the 2001 NFL Players Rookie Premiere Photo Shoot. Fancy stuff. All that aside, it’s a great card that commands a hefty price in mint condition. 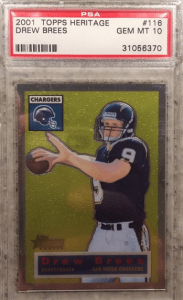 Now here is a great looking Drew Brees rookie card that won’t set you back an arm and a leg. Even if you buy the lucrative refractor version of the card. If you’re looking for a low to medium range option that’s oozing with style, this is the card for you. 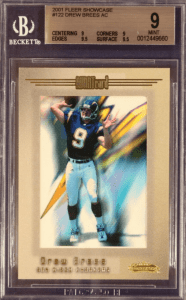 These aren’t included on our list simply because they don’t typically bring in the big bucks. However, if you’re looking for a more reasonable investment, Fleer may be the set to consider. There are many options to choose from (Legacy, Ultra, Premium, Showcase, and more) and they won’t completely deplete your bankroll. For instance, many of the high-end Drew Brees Fleer Rookie card options will cost you less than $500. Compare that to the expensive cards above and you’ll see quite the contrast. 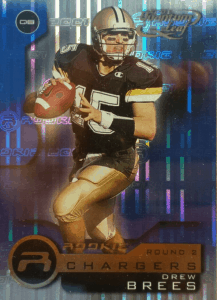 They exist alright, but they’re by no means common. Some of the sets that made first-year cards of Brees in his Purdue jersey are Press Pass, Fleer, Pacific, Leaf, Topps. One would imagine that some of the appeal of a Drew Brees Purdue card is the fact that his uniform looks almost identical to the one he’d end up wearing in New Orleans. So if you’re a Saints fan just buy one of these and pretend like he was on your side the entire time!

Here’s another 6-foot quarterback who has quite a bit of 2020 hype. Check out these Tua Tagovailoa rookie cards!

As we stated earlier, he’s still playing like his usual self and isn’t showing any signs of age. Your ultimate short play peaks with Brees going one more year and hoisting his second Super Bowl trophy in February 2022. And while this is a lot to ask, even a deep playoff run should have you seeing green. 9/10

We’re not a huge fan of this simply because we wouldn’t want our money tied up for this long. It appears clear Drew will be winding it down soon so there won’t be many changes (if any) left to get that 2nd Super Bowl or elusive MVP. If he does retire this offseason there may be some Hall of Fame attention to the Drew Brees rookie card market towards the late stages of this 5-year range. 6/10

Even if Brees doesn’t end up winning a Super Bowl there’s a good chance his records will stand for a long, LONG time. So if you’re thinking long-term you can be more than comfortable you have your money tied up in one of the greatest to ever play the game. Also, once he does retire in 2089, he’ll receive induction into the Hall of Fame on the first ballot. With a player like this, long term growth seems like a given. 10/10