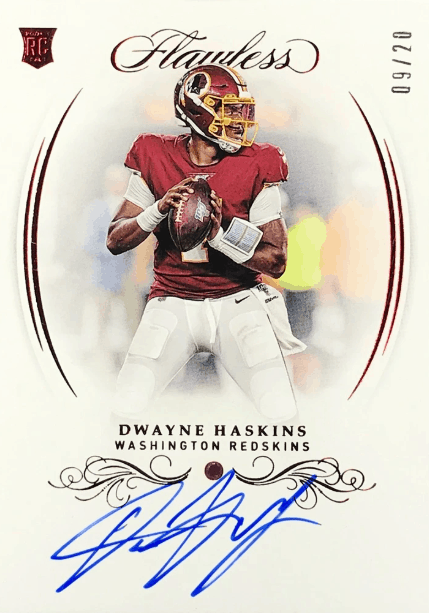 If you’re here, chances are you’ve heard some chatter about a potential second-year breakout and are thinking about investing in a Dwayne Haskins rookie card.  Striking before the iron is hot, as opposed to WHILE it’s hot, can be a great idea.  However, such a move doesn’t come without its fair share of pitfalls.  But before we get into all the heavy talk, let’s find out more about who Haskins is as a player (and perhaps why so many seem to think he’s on the verge of a breakout).

Dwayne Haskins didn’t have a long college career, but while he was there, his star certainly burned bright.  In his freshman season, Dwayne backed up starter J.T. Barret and made the best of his few snaps under center.  By the end of the year, Haskins ended up playing in a total of 8 games and completed 40 of his 57 passes for 565 yards, 4 TDs, and a passer rating of 173.1.  Now, as small as this sample may be, it’s important.  Why?  Because it almost eerily reflects what he’d go on to accomplish the following year.  Extrapolated out over a full season of snaps, of course.

Come 2018 it was time for the Dwayne Haskins show.  The sophomore QB steamrolled Big Ten defenses all season long and ended up with an 8-1 conference record, with the only loss coming in a head-scratcher blowout at the hands of Purdue.  In fact, the devasting defeat ended up being the only loss of the season and kept the Buckeyes on the outside looking in of the 4 team college playoff.  But let’s get back to those eerie stats we eluded to earlier.

Unfortunately for Haskins, that trend of consistent greatness didn’t spill over into the NFL.  To say the least.  In what was a rough rookie season, Dwayne ended up starting 7 games and threw for just 7 TD passes to go along with 7 interceptions.  His yards per game of 151.7 and QBR of 76.1 weren’t pretty either. 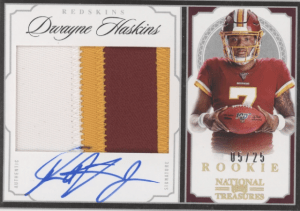 When it comes to Dwayne Haskins rookie cards, these are the crème de la crème.  Pardon our French.  There are many variations, but one of them recently sold at an eBay auction for a staggering $5,559.  Additionally, many others have brought in well over $1,000.  If you want it, be prepared to open that wallet! 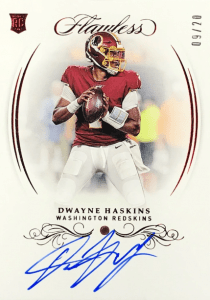 Whether the card features an NFL shield, a piece of in-game memorabilia, or just Dwayne standing tall in the pocket, it’s going to bring in some serious loot.  As always, the rarer the card, the more you’ll need to pay if you want to own one. 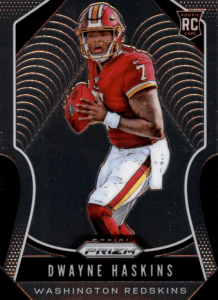 Oh so many options to choose from here.  Autograph?  Check.  Color splash?  Check.  Neon green pulsar?  Check.  In case you couldn’t tell, why love this Dwayne Haskins rookie card.  No matter which way you go, you’ll have a card that’s worth collecting.  And they likely won’t hurt your bank account as badly as the first two we mentioned. 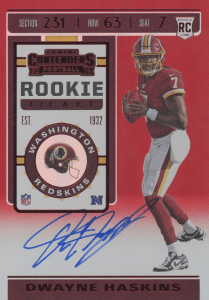 The Panini Contenders Rookie ticket cards are incredibly popular with collectors.  Which is never a bad thing when you want to put it back on the market!

Not sold on Haskins?  Check out these Tua Tagovailoa rookie cards!

We’re not sold.  After such a weak NFL debut, we’d like to see a buy-low opportunity.  But this doesn’t seem to be the case when it comes to Dwayne Haskin’s rookie cards.  Perhaps the prices are driven by what Haskins COULD BE.  Which, given his raw talent and his college performance, is quite a high ceiling.  However, for investment purposes, we’d like to see some NFL accomplishments before we buy the hype.

For now, it may be a better idea to invest in someone who’s shown he can get it done against the big boys.  That said, here are a few Kyler Murray rookie cards to take a gander at!