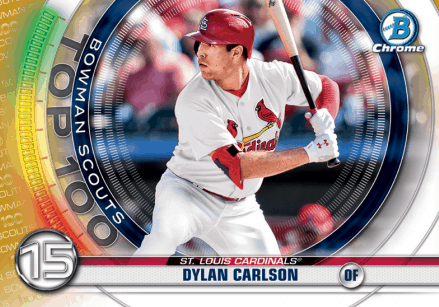 There was once a time where you had to be one of those rabid Cardinals fans to be interested in a Dylan Carlson rookie card. But the best batter to emerge Red Bird farm system EXPLODED up MLB prospect charts. Some scouts even had the young outfielder in the top 10 overall. Just take a look at Carlson’s 2019 year on the farm and you’ll see why.

However, a lackluster 2020 debut certainly killed some of the hype. Having validated the hype with a blistering 2019, the question on everyone’s mind is what type of impact would Dylan Carlson make once he officially became a Saint Louis Cardinal. Unfortunately, Carlson’s debut performance was a bit lackluster. Carlson struggled with putting together a sustained offensive streak and ended up finishing the season right at the infamous Mendoza Line. His power stroke wasn’t there wither with only 3 long balls in 100 at-bats. What about that speed and OBP?? Nope. Only one stolen base and a miserable .256 on-base percentage. But perhaps even more impressive was his triple slash of .292/.372/.452. Whether it’s with the bat or the batter’s eye, the guy knows how to get on base. And he proved that again this spring with an OBP of .436 (albeit a small sample size).

Is an unremarkable start to 2021 a Dylan Card Rookie Card buying opportunity?

While 2021 hasn’t been as bad as 2020 for Carlson, it ain’t much better. In fact, take away that .343 batting average on balls in play this season, and the overall numbers are quite similar. However, we’re not even close to writing the former top prospect off by any means. As with many players, it can take a few hundred big leagues at-bats to get going. Take the legendary Mike Trout, for example. That said, Carlson BABIP and lowly hard-hit rate so far in 2021 are making us take a wait-and-see approach at the moment. If he does get going, the cards below are what we’ll be honed in on.

Here’s another former top prospect looking to bounce back in 2021. It may be a good idea to consider scooping up one of these Michael Kopech rookie cards! 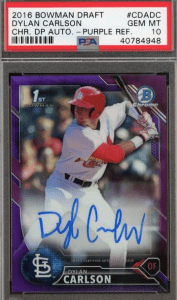 As we usually like to do, we’ll get to the most valuable first! And it comes as no surprise to see Mr. Bowman Chrome open things up. As with any Chrome card, there are all kinds of options to choose from. Autograph? Refractor? Just plain? All of these will make a big difference in value. However, if you snag an auto-refactor you’ll have a card worth at least a few hundred. Want to go for a GOLD auto-refractor?  Even a grade 9 will run you close to $1,000! 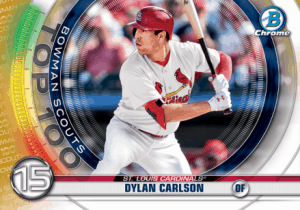 A new card that’s making a BIG splash with collectors. Perhaps because prices are so affordable. For example, an Orange Refractor can be plucked off the market for less than $20. Even autographed cards from this set are available for less than $100. Great conservative play. 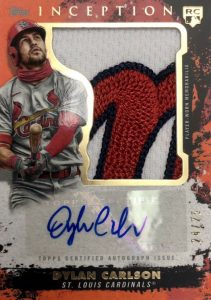 Besides the 2016 Bowman Chrome collection, this is the most valuable for Dylan Carlson rookie cards. In fact, some of the rarest autograph rookie patches will run you over $1,000. As far as style goes, we love the Jumbo Logo card shown above. This /25 card makes for a moderate to higher-end investment with a value of somewhere around $600. 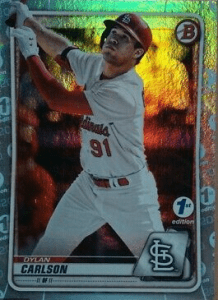 Just like the last card, this is a great option for those who don’t want to shell out the big bucks for a QUALITY Dylan Carlson rookie card.  If you want a cream of the crop version, look for one of the “mojo refractors”. They’re some of the most valuable and will only set you back a hundred bucks or two. 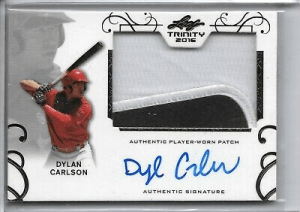 This is a card that does NOT show up for sale too often. That said it’s hard to get a feel for its true value. Especially for grade 10 cards. However, non-graded versions have sold between $50 – $100 in the past. 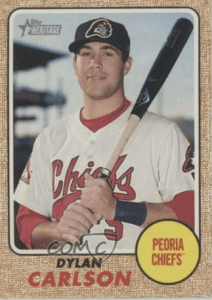 When it comes to style, we LOVE Topps Heritage. This one shows Carlson in his Peoria Chiefs A-Ball uniform. A simple and affordable card. Look for one with an autograph if you’re looking to max out the value. 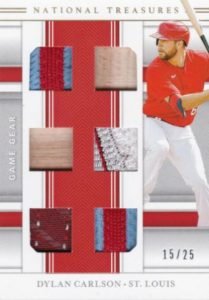 National Treasures isn’t exactly known for its baseball card prowess. However, we can’t help but like a lower-priced option from a set known for its high (but not over) priced basketball and football cards. The card above is the 6 Gear HOLO Gold. It has a print run of just 25 and will cost you less than $50. Additionally, 2020 National Treasures offers a variety of similarly-priced Dylan Carlson rookie card options. If you don’t like all that material on the card above, go for one without the patchwork and opt for an autograph. Can’t go wrong either way!

Speaking of next-level talent…..are you willing to take a chance on a Jarred Kelenic rookie card?

As we’ve stressed before in our thoughts of Wander Franco rookie cards, prospects are a BIG gamble. Collectors who bought high in hopes of a monster 2020 debut from Carlson likely know that all too well. The good news is, Carlson’s rookie cards are still incredibly affordable compared to other young players with similar potential. If Carlson turns around his mediocre performance by the end of the season you’ll be in good shape. However, that’s a big if. 6.5/10

At this point, we’d like to see whether or not Carlson will ever break out before we’d even consider trying up money for longer than a year. If Carlson starts to hit we’d go ahead and take short-term profits. 5/10